Dodgers vs Braves Picks and Predictions: Land of the Fried

Atlanta's heater was abruptly halted, but Max Fried is still a dangerous arm that can get the Braves back on track, especially at home. With the Dodgers sending a patchwork starter to the mound, see why ATL's edge is worth backing in our MLB betting picks.

The MLB betting board for Saturday features a marquee matchup between the last two winners of the World Series as the Atlanta Braves welcome the Los Angeles Dodgers to Truist Park.

The Braves lost the first contest in this three-game set last night but MLB betting lines opened with them installed as -149 home favorites for tonight. Here are our best free Dodgers vs. Braves MLB picks and predictions for June 25.

This line hit the board with the Braves installed as -149 favorites and the Over/Under at 8.5. Early money came in on the Braves, moving the line closer to -160 but buyback on the Dodgers has resulted in the line dropping back to around -150 as of 1 p.m. ET.

Mitch White (1-1, 3.86 ERA): The 27-year-old is looking to carve out a spot in the rotation with Andrew Heaney on the IL. White had a 3.66 ERA with a 1.18 WHIP in 46 2-3 innings last season, with the majority of those coming out of the bullpen. Over the last month, he has bounced between Tiple-A Oklahoma and the Dodgers, making three MLB starts over that span and allowing just eight hits and three runs in 14 innings.

Max Fried (7-2, 2.77 ERA): The southpaw is Atlanta's ace and has pitched to a career-best 1.05 WHIP in 14 starts this season while holding opponents to a batting average of .234. Fried is coming off an impressive outing against the Giants on Monday when he fanned eight batters over seven innings of one-run ball.

Dodgers: Mookie Betts OF (Out), Daniel Hudson RP (Out), Blake Treinen RP (Out).
Braves: Edwin Rosario OF (Out), Ozzie Albies 2B (Out), Luke Jackson RP (Out).
Find our latest MLB injury reports.

The Dodgers are 1-5 in the last six meetings in Atlanta. Find more MLB betting trends for Dodgers vs. Braves

Dodgers vs Braves picks and predictions

The Dodgers defeated the Braves 4-1 last night with Freddie Freeman plating a pair of runs against his former team. That gives the Dodgers four straight victories and improves their record to 44-25, the third-best winning percentage in the majors. The Braves may have dropped that game but they're still 10 games above .500 thanks in large part to a 14-game winning streak that ended last week.

These are two of the best hitting teams in the majors, with L.A. ranking second in OPS at .762 and the Braves in fourth place at .753. They've been even better over the last 15 days, with the Braves leading the majors with an OPS of .834, while the Dodgers are fourth (.800) despite missing All-Star outfielder Mookie Betts since last Wednesday.

While both of these lineups have been mashing, the Braves should have the edge on the mound tonight. They'll be sending ace Max Friend and his 2.77 ERA to the hill, while the Dodgers will respond with inexperienced starter Mitch White.

White has looked very sharp in his last few starts, but he has average peripheral numbers, including an expected slugging percentage that ranks exactly in the middle of all pitchers this season. White's last three starts came against the White Sox, Pirates, and Diamondbacks, and he won't find it nearly as easy to navigate this deadly Braves lineup.

Fried has been red-hot lately, pitching to a 1.93 ERA over his last five starts. He also has a history of pitching very well against the Dodgers, boasting a 2.98 ERA in seven regular and postseason starts against the Dodgers going back to the start of the 2020 season.

The Braves bullpen has also been lights out lately and ranks fourth in the majors with a collective 3.03 ERA. I'll take the pitching advantage for the home side.

Even though Fried's pitched well lately the Over has cashed in five of his last eight starts.

And, despite a low-scoring contest between these squads last night, both of these teams have been raking in recent weeks. The Dodgers not only lead the majors with 5.16 runs per game, they've increased that number to 6.67 runs/game over their last six games despite playing without Betts. Meanwhile, the Braves are plating 5.78 runs per game over the last 30 days.

I'm expecting at least one of these sides to have some success at the plate today and leaning towards the Over 8.5.

While I'm slightly leaning towards the Over on the game total, I'm more confident in the Under when it comes to how many earned runs Fried will surrender.

In 10 of his last 13 starts, Fried has allowed fewer than three earned runs, including a seven-inning shutout against the Dodgers on April 19.

Matter of fact, in those previously mentioned seven starts versus the Dodgers since 2020, Fried allowed more than two runs on just a single occasion. 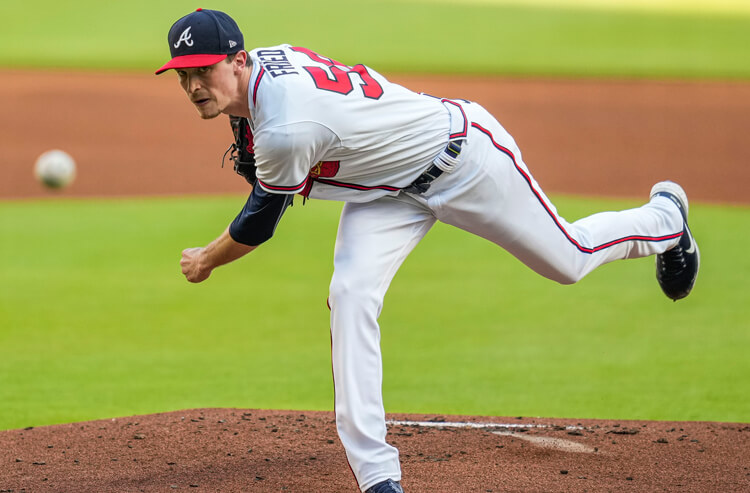 Dodgers vs Braves Picks and Predictions: Land of the Fried
Provided by