Boston bludgeoned Houston's pitching for the second straight game yesterday, and our MLB betting picks expect that to continue in tonight's Game 4 with the Astros sending veteran Zack Greinke to the mound for his first start in a month. 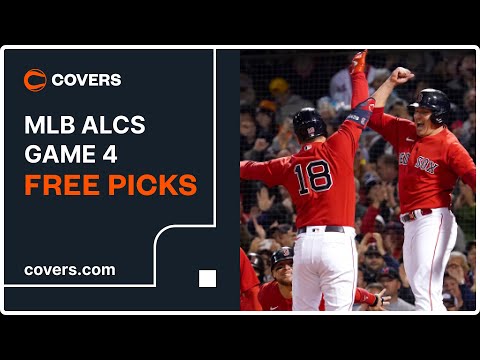 The Boston Red Sox used the boomsticks again in Game 3 with a 12-3 beat down of the Houston Astros to take a 2-1 series lead in the ALCS. The Astros haven’t gotten nine outs from any of their starters in the series and turn to Zack Greinke tonight, who last started a game on September 19. The home team will counter with Nick Pivetta, who sports a 3.11 postseason ERA through two appearances (8 2-3 innings).

The Red Sox opened as -130 MLB betting home favorites in this pivotal Game 4 after closing yesterday at -123 (opened at -111). After an opening total of 8 in Game 1 and 38 total runs scored over three games, Tuesday’s total has opened at 10.

Here are our free picks and predictions and MLB odds for Astros vs. Red Sox on Tuesday, October 19.

USA: Bet $50 on the Red Sox or Astros moneyline at FanDuel and get $25 in free bets for every home run your team hits — win or lose! Claim Now

Zack Greinke (Postseason: 0-0, 0.00 ERA): Greinke has made just one postseason appearance so far for the Astros and gave up two hits with a strikeout in just one inning of relief work. Greinke last started a game on September 19 and struggled with neck stiffness late in the season that sent him to the IL. The right-handed veteran pitched one game at Fenway this year, lasting just three innings in giving up four runs on seven hits, and Greinke has pitched at Fenway just four times over his career — and Red Sox batters are slashing .393/.448/.656.

Nick Pivetta (Postseason: 1-0, 3.12 ERA): Pivetta was a candidate to start the Wild Card game as he was one of the team’s better starters down the stretch. The right-hander owned a respectful 3.60 ERA over four starts (five appearances) in the last month of the season and has totaled 8 2-3 innings of postseason work despite not starting a game. He was great in his last outing, throwing four scoreless innings on three hits with seven punchouts in Game 3 of the ALDS at Fenway.

In all best-of-seven postseason series tied at 1-1, the team winning Game 3 has gone on to win the series 69 percent of the time. Find more MLB betting trends for Astros vs. Red Sox.

The Red Sox are in the driver's seat. They’ve set the tone for this series with a trio of grand slams and have knocked out Houston starters before the third inning in each of the series’ first three games. This has, in turn, overworked Dusty Baker’s bullpen, which has also been hit hard and owns a 4.79 ERA over 20 2-3 innings — including 6-plus innings last night. In comparison, Houston starters have tossed just 5 1-3 total innings.

It’s hard not to see that trend continuing with the Astros starting Zack Greinke tonight. The 37-year-old veteran has a ton of postseason pitching success but has only thrown 21 pitches since October 3 and hasn’t made a start since September 19. And over his last three starts, Greinke has allowed 19 runs over 18 innings and landed on the IL with neck soreness after a four-inning, five-homer outing on September 19. The Houston pitcher also surrendered seven long balls over his last 22 1-3 innings.

The Boston sticks are just too hot right now and with Lance McCullers not making an appearance this series, Houston is running out of arms to try and stop a Boston team that has launched nine home runs and is hitting .296 as a team this series.

The Houston offense can hold its own and have plated 13 runs in three games but Boston has a massive advantage in the bullpen after Eduardo Rodriguez went six innings yesterday and gave the Sox bullpen a breather. Pivetta was strong for the team down the stretch and pitched in some big spots, including picking up the save with a scoreless inning in the final regular-season game of the year. He struck out seven Rays over four innings in his last appearance and pitched well against the Astros in two starts this year.

However much we like the Red Sox, there has to be a price in which fade the favorites — and -128 isn’t it. This is nearly the same price as yesterday’s game, which we felt was a more even pitching matchup. Greinke is a big name in big spots, but he isn’t throwing five-plus innings tonight and will give way to a familiar and overworked Houston bullpen. Get on this number now if you like the Red Sox.

The series is a perfect 3-0 to the Over and the last two have been easy cashes, with both winning well before Neil Diamond hit the Fenway speakers. Three grand slams have also contributed in a big way but Tuesday’s battle gives bettors a brand new number to bet against... and that’s 10.

Getting 10 runs in a Game 4 of 2-1 series is no easy accomplishment, especially when we need 11 runs to win. Fenway in October also plays differently as Ballpark Pal has the park as pitcher-friendly with its mid-50s forecast helping to suppress total bases by 2.69.

It’s safe to assume that the total has hit 10 thanks to the state of the Astros’ bullpen and the unknowns behind Greinke. Betting on the Under here is trusting the Houston bullpen to get through multiple innings against the best lineup in the postseason, where even No. 9 hitter Christian Arroyo is slugging with a home run last night and three RBI.

Greinke has thrown 100 pitches just once in his last 16 starts and his total outs prop isn’t even on the board because of its uncertainty. If it were to be posted, we’d figure it would be around 12.5-13.5 outs — which still means a lot of baseball is expected for a bullpen that has thrown 26 innings and given up 18 runs over Houston’s last five games.

Pivetta has looked much better near the end of the season but we’re also talking about a starter who carries a 5.40 ERA at home with a .840 OPS against and 17 home runs over 73 innings at Fenway this year. Boston’s bullpen is also its weakness (and a 4.50 ERA in this series) and if Pivetta stumbles and Houston gets to the Red Sox’s relievers early, both teams could put up five runs each.

This is a tough number and is more of a lean than a pick for us and that sides with the Over here. If you're going to bet this total, watch this price and see which way it moves. It opened at +100 to the Over but we wouldn’t be surprised if some sharp money brings this high total down in price.

Yankees vs Astros Picks and Predictions: One Night in Houston
Chris Hatfield | Jun 30, 2022