Braves vs Dodgers NLCS Game 3 Picks and Predictions: Adding Buehl To the Fire

After consecutive walk-off losses, the Dodgers are in an 0-2 hole and need a win in Tuesday afternoon's Game 3. LA is turning to another one of its studs, Walker Buehler, which has our MLB picks leaning towards the desperate Dodgers leading early. 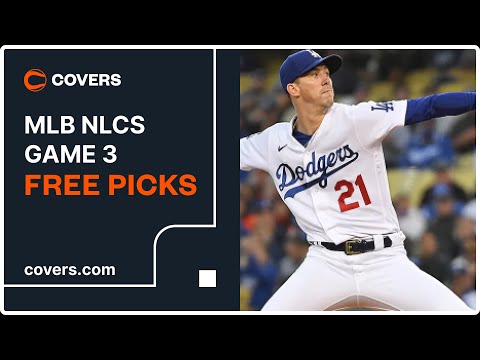 The Atlanta Braves and Los Angeles Dodgers tangle in Game 3 of the NLCS on Tuesday afternoon.

The Braves won the first two games of the series at home in thrilling fashion and will try to take a commanding 3-0 series lead with another victory. However, oddsmakers aren't expecting Atlanta to grab that massive lead as MLB betting lines installed the Dodgers as significant -175 favorites for this sunny California showdown.

Here are our best free Braves vs. Dodgers picks and predictions for October 19 with the first pitch scheduled for 5:08 p.m. ET.

Charlie Morton (Postseason: 0-1, 3.86 ERA): The two-time All-Star was Atlanta's best starter during the regular season, going 14-6 with a 3.34 ERA and a 1.04 WHIP. Morton made two starts against the Brewers in the NLDS, allowing four runs and seven hits while fanning 14 batters in 9 1-3 innings.

Walker Buehler (Postseason: 0-1, 3.38 ERA): The 27-year-old is one of the best in the business and finished the regular season with a 16-4 record and an ERA of 2.47, while holding opposing hitters to a batting average of .199. He surrendered three runs in 6 1-3 innings in L.A.'s NLDS Game 1 loss to the Giants but bounced back with a strong performance in Game 4, when he limited San Fran to three hits and one run across 4 1-3 innings.

Braves: Marcell Ozuna OF (Out), Ronald Acuna Jr. OF (Out), Jorge Soler OF (Out).
Dodgers: Max Muncy 1B (Out).
Find our latest MLB injury reports.

The Under is 18-6-2 in the Braves' last 26 games as an underdog. Find more MLB betting trends for Braves vs. Dodgers.

The Braves pulled off their second-straight walk-off win against the Dodgers in Game 2 on Sunday with an Eddie Rosario single driving in Dansby Swanson to claim the 5-4 victory. However, the Dodgers had only allowed two runs until the eighth inning and they will hope to get that same caliber of starting pitching in Game 3 as they send All-Star Walker Buehler to the mound.

Buehler has been one of baseball's best pitchers ever since he earned a spot in the Dodgers rotation in 2018. This past season he led all pitchers in quality starts (27) while finishing second in WAR (6.7) and third in wins (16), ERA (2.47), and WHIP (0.97). The Braves will counter by sending Charlie Morton to the mound and the veteran is still going strong at 37-years-old, pitching to a 3.34 ERA with an OBA of .203 this season.

As good as Morton is, he isn't quite on Buehler's level and the Braves bullpen behind him isn't quite as effective as L.A.'s (despite what the last two games might suggest). During the regular season, Dodgers relievers collectively led the majors in OBA (.205) and ranked third in WHIP (1.19), while Atlanta ranked 18th in both OBA (.241) and WHIP (1.32).

These lineups are filled with dangerous hitters but they are pretty even in that regard, with both teams boasting an identical .244 batting average during the regular season and the Dodgers having a slim .759 to .754 edge in OPS. With the sluggers relatively on par, we're leaning towards the slightly superior pitching and expecting the more desperate squad to dig deep at home.

We see the Dodgers bouncing back with a win but -175 is steep with how well the Braves have been playing lately. And with how close these games have been, backing L.A. on the full game run line also seems like a bad idea. So instead, we'll avoid the chance of more Braves late-game heroics and back the Dodgers to have the lead after five innings.

The Under is 5-1 in the last six meetings between these teams and while the Over cashed in Game 2, only four runs were scored in the first six innings.

There's the old adage that good pitching beats good hitting and the batting numbers for these teams this postseason back that up. Both of these lineups have faced off against some formidable pitchers during these playoffs with the Braves plating 3.33 runs per game with an OPS of .670 and the Dodgers averaging 3.38 rpg with a .665 OPS.

Buehler is terrific wherever he throws but he's especially dominant at Dodgers Stadium, where he pitched to a 2.05 ERA this season and has a sizzling 2.30 ERA in 313 career innings. Morton is no slouch himself and finished the regular season by pitching to a 2.71 ERA with a 0.88 WHIP in 12 starts since the beginning of August.

Braves vs Dodgers NLCS Game 3 Picks and Predictions: Adding Buehl To the Fire
Provided by