Trout is doing Trout things. The three-time MVP is off to a hot start, batting a sizzling .368/.556/.737 with two bombs through six games.

We're going to get our first look at how TD Ballpark plays for a major league game, as the Toronto Blue Jays will host the Los Angeles Angels in Dunedin, Florida for their home opener Thursday.

The Blue Jays come into this one off a disappointing series against the rebuilding Texas Rangers, losing two of three, while Los Angeles took three of four from the Chicago White Sox before splitting a mini two-game set with the Houston Astros.

Here are our best free MLB betting picks and predictions for Angels vs. Blue Jays on April 8 at 7:07 p.m. ET.

Griffin Canning (2020: 2-3, 3.99 ERA): Canning will make his season debut after a non-injury-related decision pushed back his original start. The second-round pick of the Angels in the 2017 draft has been respectable over two abbreviated seasons in the majors, but while his ERA improved from 4.58 in 2019 to 3.99 last year, his strikeout rate dipped and his walk rate increased by two percent. Still, he's just 24 years old and was not long ago a top prospect for an Angels organization that has struggled to develop pitching. He could be in line for a mini breakout this season but gets a tough assignment to begin the year.

Ross Stripling (0-1, 8.10 ERA): It's unlikely Stripling stays in the rotation for long, but injuries to top prospect Nate Pearson and lefty Robbie Ray created some openings in Toronto's starting staff. Stripling, acquired in a deal with the Dodgers last year, went 3 1-3 innings in his season debut against the New York Yankees, allowing three runs on seven hits while striking out five in the loss. He gets another difficult opponent at Toronto's spring training site (the club's temporary home), a park that's expected to be a hitter-friendly environment.

The temperature is expected to be 75 degrees Fahrenheit for first pitch, with southwest winds of 9 mph and wind gusts of 20 mph. Be sure to monitor the gametime conditions with our MLB weather info.

Angels are 6-1 in their last seven meetings against Toronto. Find more MLB betting trends for Angels vs. Blue Jays.

The Angels consistently disappoint and waste years of Mike Trout's prime but there's hope this could be the year they finally get back to the postseason, where they haven't been since 2014. Trout, batting .368/.556/.737 with two bombs, has only played three playoff games in his career, which is absolutely criminal. But with the Astros without Justin Verlander for the season and down George Springer, who signed with the Blue Jays, they are more vulnerable than they've been in years. And last year's AL West division champs, the Oakland A's, got off to their worst start in 105 years, getting rocked in each of their first six games.

The biggest reason for optimism, besides having MLB's best player in Trout, comes down to Shohei Ohtani. The unique talent is a potentially game-changing MVP threat with his ability to rake and throw 100 mph on the mound. Injuries, which he has dealt with plenty to his pitching arm, will be the biggest thing that holds him back and, ultimately, the Angels.

So far, Ohtani is off to a great start, batting .300/.333/.700 with two homers and an impressive start in his only pitching appearance of the season. The Ohtani-Trout duo could be the best in the majors and turn the Angels into one of the game's most feared offenses. A 2-3-4 of Ohtani, Trout, and star third baseman Anthony Rendon is a nightmare for opposing pitchers.

Toronto, meanwhile, is similar in the sense that its offense is the most dangerous part of its team. The Blue Jays have a young and exciting lineup that can mash but are currently down Springer, who started the year on the IL with an oblique injury and then tweaked his quad while rehabbing. Toronto will have to wait longer before deploying its six-year, $150 million investment. But even without Springer the Jays have a deep lineup with their other big offseason acquisition Marcus Semien at the top and, if early returns are any indication of the next six months, we could be looking at a breakout campaign from Vladimir Guerrero Jr., who is hitting .316/.458/.526 through six games.

We're expecting both offenses to go off tonight but will take the Angels at slightly better odds.

The Angels' bats are off to a solid start, as the team enters Thursday eighth in runs scored, seventh in slugging, and eighth in weighted runs created plus, which has Los Angeles as 10 percent better than league average and eighth in baseball.

While Stripling is valuable for a Jays team dealing with pitching injuries, he's essentially a league-average arm going up against an offense that can explode at any time. He threw 79 pitches in his season debut and is likely still building up arm strength as he was destined for a swingman role at the start of spring, so Toronto will almost certainly dip into its bullpen again early in this one. To the Jays' credit, their 'pen has been promising so far, as Toronto's relievers collectively rank third in ERA (1.96) and seventh in strikeout rate (28.9 percent).

Griffin only threw more than two innings twice in spring and with this being his first start of the season, we're likely looking at a shorter outing from him as well. He struggled in spring and battled control issues and, although the Jays rank 24th in wRC+ (19 percent below league average), this is a dangerous offense that is tied with the Angels with nine homers, behind only four other teams.

The Jays have gone Under in five of their six games but we're not expecting that to be the case tonight. 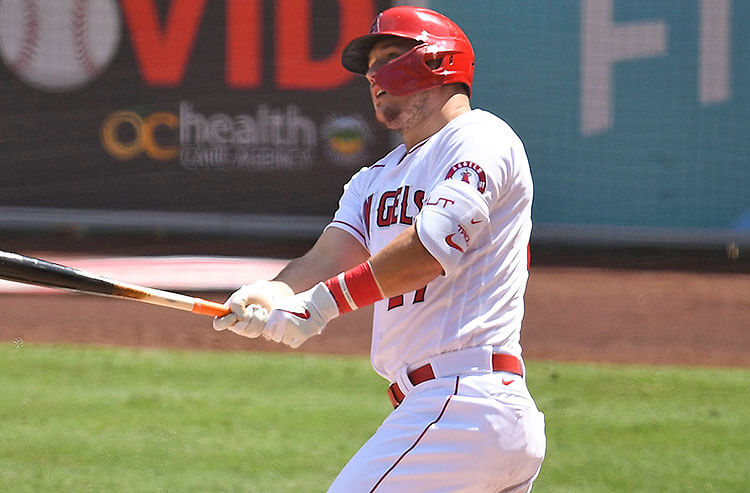 Dodgers vs Braves NLCS Game 6 Picks and Predictions: Defending Champs on the Edge
Josh Inglis | Oct 23, 2021
About Us
Contact Us
Careers
Our Team
Brand
Testimonials