According to CG Technology sportsbooks in Las Vegas, 92 percent of tickets written (bets placed) were on McGregor but 79 percent of the handle (money wagered) was on Mayweather.

If you’re among the millions wanting to place a bet on Saturday’s showdown in Las Vegas, but don’t know where to start, check out Covers’ 30 need-to-know betting tidbits and tips for Mayweather-McGregor.

1. When Mayweather-McGregor rumors started in May 2016, Canadian online sportsbook SportsInteraction.com opened Mayweather as a -10,000 betting favorite with McGregor coming back at +1,500 underdog odds.

2. SportsInteraction.com also opened a Yes/No prop on whether the fight would actually happen or not in May 2016, setting “Yes” at EVEN money and “No” as a -141 favorite.

3. Once it looked like the matchup would actually happen the fight opened at Mayweather -1,000 at most sportsbooks in Las Vegas and offshore, with McGregor coming back at +700. One-sided action on the underdog has slimmed those prices to Mayweather -440/McGregor +350 as of the week of the fight.

5. McGregor has picked up 18 of his 21 professional MMA victories by way of knockout. McGregor is priced at +350 to win the fight outright and just +425 to win via knockout, with oddsmakers knowing his best – and perhaps only – shot at winning this fight is to KO Mayweather.

7. McGregor has a 2-inch reach advantage over Mayweather – 74 inches versus 72 inches. The last time the five-division boxing champ faced a foe with a reach edge was Oscar De La Hoya in 2007 – a split decision win that De La Hoya controlled in the early rounds.

8. Both fighters lobbied for 8-ounce gloves rather than the recommended 10-ounce gloves for 154-pound bouts and the Nevada State Athletic Commission made the switch. That prompted sportsbooks to move the fight odds, with William Hill Nevada adjusting from Mayweather -600 to -500 and McGregor from +450 to +425. McGregor is used to wearing 4-ounce MMA gloves in the UFC, so the smaller gloves should help him keep his hands up as the fight plays out.

“We are hoping that McGregor’s two-round knockout prediction with the smaller gloves doesn’t ring true.  As of it today, it would be our worst sports result ever,” says Nick Bogdanovich, William Hill U.S. Director of Trading.

9. According to CG Technology sportsbooks in Las Vegas, 92 percent of tickets written (bets placed) were on McGregor but 79 percent of the handle (money wagered) was on Mayweather. Smaller bettors have sided with the underdog while larger bettors have to wager more to win less with Mayweather’s odds.

10. You can bet on “Will Mayweather and McGregor touch gloves?”, which SportsInteraction.com has priced at “Yes” -257 and “No” +176. Mayweather touched’em up with Andre Berto and Manny Pacquiao in his last two appearances but McGregor, who did touch gloves with Eddie Alvarez in his most recent UFC fight, shunned Diaz in both meetings as well as Jose Aldo.

12. Dave Mason of BetOnline.ag says the prop for McGregor to win in Round 1 has massive liability for his book. It was as large as 33/1 and has been bet down to 20/1 and a McGregor victory in the first round would deal them a loss bigger than any MLB game during this current baseball season.

13. During their press tour, Mayweather challenged McGregor to bet his purse from this fight on himself for the August 26 bout. At McGregor’s current odds of +350 and given his estimated purse of $75 million, he would stand to win $262,500,000 if he were to defeat Mayweather.

14. “Hell, Ricky Hatton would beat Conor in a boxing match after a night out on the town. I can't express enough how happy I am that the media and fans are actually embracing this fight and somehow making an argument that it's going to be competitive. It's not even going to be close. The scorecards will read like the NBA playoffs games for the Golden State Warriors, 120-96 or so, if the bout gets past four rounds.” – renowend boxing and MMA oddsmaker Joey Oddessa.

16. CompuBox statistics state that Mayweather has landed 43.4 percent of his career punches while limiting foes to just under 19 percent – a +24.5 plus/minus rating. The Over/Under on McGregor’s punch accuracy for this fight is 14.5 percent (Over -130/Under EVEN).

17. According to ESPN Stats and Info, through McGregor’s 10 UFC bouts, 66 percent of his landed punches were to his opponents' right side – with McGregor being left handed. Of those landed punches, 91 percent were categorized as power punches.

19. Mayweather has only suffered one recorded knockdown in his storied career and that was more a reaction to breaking his hand on Carlos Hernandez’s face in 2001. Mayweather to get knocked down is paying +300 while both fighters getting knocked down is set at +500.

21. Heading into fight week, many sportsbooks expect the handle on the Mayweather-McGregor betting odds to rival that of the Super Bowl pointspread. It is also expected to eclipse total money wagered for events like the College Football National Championship and the NCAA tournament championship.

22. McGregor’s former sparring partner Paulie Malignaggi got into a war of words with the UFC star following images of Malignaggi getting knocked down in training were released. UK-based sportsbook Ladbrokes.com has odds on “Conor McGregor to fight Paulie Malignaggi in his next fight” paying +700.

23. Pop star Justin Bieber has been part of Mayweather’s entourage during his walk to the ring in past bouts. BetOnline.ag is taking wagers on whether Bieber will carry Mayweather’s belts to the ring (Yes +150/No -180), if Bieber will wear a hat (Yes -170/No +140) or sunglasses (Yes -220/No +180) during the pre-fight parade.

24. Sticking with Mayweather’s entourage, rumors soared that he was recruiting MMA fighter Nate Diaz – the last man to beat McGregor – to walk him to the ring. MyBookie.ag has the prop “Will Nate Diaz walk out with Floyd Mayweather” with “Yes” priced at +115 and “No” at -160.

25. According to UK-based sportsbook Ladbrokes, more than 5 million bets will be placed on Mayweather-McGregor. That more bets than there are people in Ireland.

26. If you’re waiting for the big sharp action on Mayweather to move the odds up on McGregor, you may want to wait until minutes before the bout. With Irish fight fans flocking to Vegas Saturday, and betting their countryman with both fists, McGregor could continue to watch his underdog price slim in the hours before the fight. The closing line may not reflect all the big wagers on the favorite that come in last second. 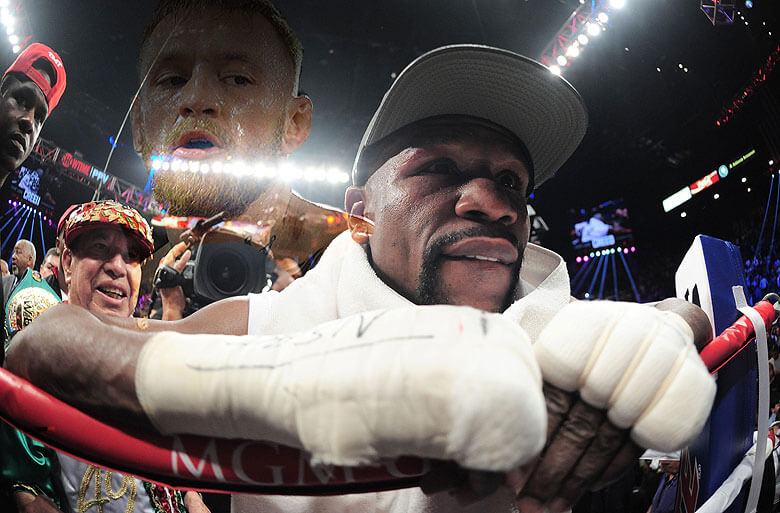