Michael Chiesa likes to dictate fights with his takedowns and wrestling, but Vicente Luque is a different beast than the fighters he's recently manhandled. Chiesa won't take down Luque without taking damage, which is why we're backing the Silent Assassin.

Michael Chiesa vs. Vicente Luque is on the main card for UFC 265 betting on August 7.

This will be an intriguing bout between a pair of highly-ranked welterweights with opposing styles. UFC betting odds have the heavy-handed Luque installed as a -138 favorite while the wrestling-specialist Chiesa comes back at +110.

Here are our best free Chiesa vs. Luque picks and predictions for Saturday, August 7 from the Toyota Center in Houston, Texas.

Michael "Maverick" Chiesa comes into this fight as the No. 5-ranked welterweight and has reeled off four straight wins since moving up to the 170-pound division in 2018. He is coming off a victory against Neil Magny in January and has looked much better in this weight class, as he may have been sapping too much of his strength by cutting to 155 pounds.

With a background in wrestling and BJJ, the 33-year-old is a terrific grappler with 11 of his 18 career wins coming by submission.

Vicente "The Silent Assassin" Luque enters this fight at No. 6 in the welterweight rankings and is fresh off a first-round stoppage win against former champ Tyron Woodley in March.

The 29-year-old has won nine of his last 10 UFC fights, with his lone defeat in that span coming by decision to welterweight contender Stephen Thompson in a performance that earned Fight of the Night honors.

The Silent Assassin is a violent fighter who loves to mix it up and combines excellent technical boxing with ferocious power.

Chiesa vs Luque tale of the tape

PREDICTION: Moneyline Luque (-138) - Chiesa's path to victory lies in his ability to dictate the style of this fight with takedowns and wrestling, but Luque is a far more violent fighter than the ones he has manhandled on his recent run.

In Chiesa's last three fights, which went a full 43 minutes, he absorbed a total of just 33 significant strikes — while Luque lands 5.74 significant strikes per minute. Chiesa won't be able to take down Luque without taking damage and even if he does get his hands on Luque, he won't find it easy to control him.

Luque showed against Woodley just how strong he can be against the fence — and he's also excellent off his back. Don't forget that he has an underrated grappling game and began his career on the BJJ-heavy Brazilian circuit, with five of his first nine victories coming by way of submission.

There is a smaller gap between the grappling ability and strength of these two fighters than there is between the explosiveness and striking ability, where the Silent Assassin has the clear cut edge. 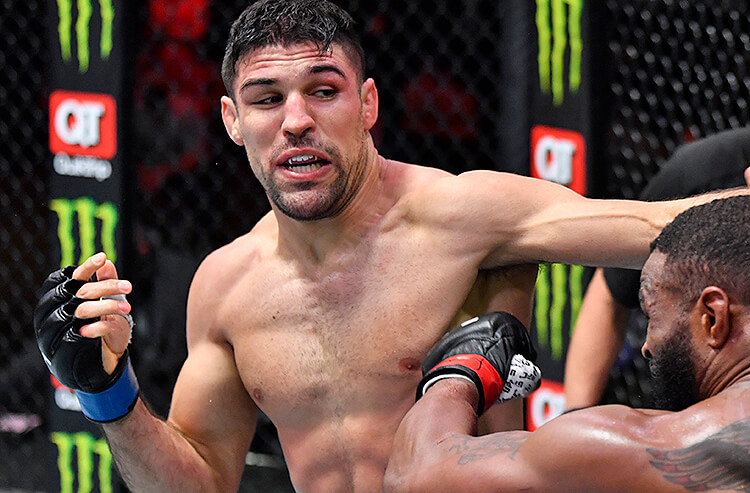 UFC 265 Chiesa vs Luque Picks: Loud Victory for the Silent Assassin
Provided by