Ciryl Gane vs. Derrick Lewis will fight for the interim UFC Heavyweight Championship on August 7. Gane takes a perfect 6-0 UFC record into this bout with Lewis, who has one-punch knockout power. Find out who we like in our UFC 265 picks and predictions.

Derrick Lewis vs. Ciryl Gane is the main event for UFC 265 betting on August 7.

This fight will be for the interim UFC Heavyweight Championship after current champ Francis Ngannou's team couldn't come to terms with Dana White on a date to defend his title against Lewis. Gane comes into this fight as a significant -333 favorite while Lewis comes back at +250.

Here are our best free UFC 265: Lewis vs. Gane picks and predictions for Saturday, August 7 from the Toyota Center in Houston, Texas.

Odds courtesy of FanDuel Sportsbook as of August 7, 2021.

Derrick "The Black Beast" Lewis enters as the No. 2-ranked heavyweight contender and is fresh off a knockout win over Curtis Blaydes in February. He now has four wins in a row, bouncing back from consecutive losses—one of which came against Daniel Cormier for the heavyweight championship in 2018.

The 36-year-old is a massive man that walks around at 290 pounds before cutting for the weigh-in. His conditioning is subpar but he has terrific strength and punching power, with a UFC record 12 knockouts in the heavyweight division.

Ciryl "Bon Gamin" Gane is No. 3 in the heavyweight division and is fresh off a unanimous decision win over Alexander Volkov in June. The Frenchman is now a perfect 9-0 in his MMA career, including 6-0 in the UFC. The 31-year-old is a physical specimen that looks and moves like an NFL edge rusher.

Not just a fantastic athlete, Gane is an excellent technical striker who excelled in kickboxing and Muay Thai before entering MMA. He has also quickly adapted to the grappling side of the sport, with three of his eight victories coming via submission.

Lewis vs Gane tale of the tape

PREDICTION: Moneyline Gane (-333) - It's easy to see why Gane is the favorite, as he's the far more technical striker with better accuracy, output, and cardio. That said, Lewis does have the ultimate equalizer: his one-punch knockout power.

The Black Beast's knockout win as a +150 underdog against Volkov in 2018 is particularly interesting. All of Lewis' opponents on his recent winning streak are wrestling specialists and Volkov was the last high-level striker he faced. Lewis was pieced up by the superior kickboxer and was behind on the cards before he caught the Russian with a big right hand late in the third round.

Can he do something similar against Gane? Possibly, but Gane is faster with better movement and slicker defense than Volkov, which he proved when he absolutely dismantled him by scores of 50-45, 50-45, and 49-46 in June.

With his Muay Thai background and grappling ability, Gane is also better than Volkov in inside exchanges, so even if Lewis manages to close the distance he might find himself at a disadvantage in the pocket. Back Gane to continue his ascent with a win.

PREDICTION: Gane to Win by Points - Lewis winning by KO/TKO seems like his only real path to victory and Gane is well aware of that saying, "this guy is really dangerous with his fists. So the plan is to make pressure, touch him but he’s not going to touch me."

Gane has tangled with some heavyweights with big-time power lately and has rarely been cracked. The fact that he's fighting just six weeks after going 25 minutes with Volkov tells you just how much damage he took in that bout.

Matter of fact, Gane is absorbing just 2.60 significant strikes per minute despite recent bouts against high-volume heavyweights like Volkov, Jairzinho Rozenstruik, and Tanner Boser that all went the distance.

Lewis is a low-output fighter who averages just 2.59 significant strikes per minute. Expect Gane to avoid his power shots and outpoint him over five rounds.

PREDICTION: Over 2.5 Rounds (-126) - Given our previous pick this seems like a no-brainer. Gane is a highly skilled fighter but he doesn't push for the finish and three of his last four bouts have gone the distance, including his previous two bouts which went 25 minutes.

Lewis might be the hardest puncher in MMA outside of Ngannou but he isn't a fast starter like the champ, and eight of his last 13 fights have gone until at least late in the third round. 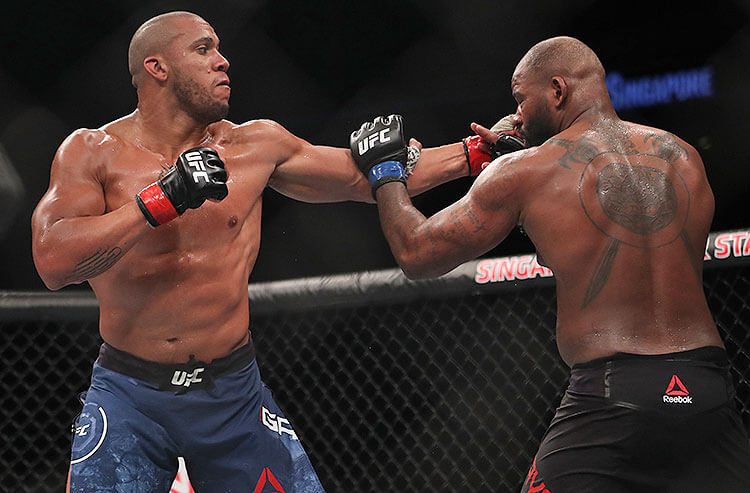