Billy Quarantillo's facing a reeling opponent who's dropping down a weight class at UFC 282, and we don't expect him to waste any time putting the hurt on Alexander Hernandez. See why a quick finish is among our best UFC prelim picks for Saturday.

UFC 282 is the final card for 2022, and the T-Mobile Arena in Las Vegas is headlined by a vacant light heavyweight title fight between Jan Blachowicz and Magomed Ankalaev.

The main card features plenty of competitive matches, but we turn our attention to the preliminary cards, where several bouts can serve as solid stand-alone UFC odds bets or excellent parlays.

Here are our free UFC picks and predictions for the UFC 282 preliminaries on December 10.

Click on each fight to jump to the full analysis.

A) Billy Quarantillo to win by submission vs. Alexander Hernandez BOOSTED to +700 at Caesars! Bet Now

Shahbazyan’s career needs a jolt after losing his last three fights, causing him to shake up his training team — now working with Xtreme Couture. A Shahbazyan vs. Lungiambula win for the favorite isn’t going to buy back the lost momentum, but Shahbazyan thankfully has a limited opponent who should be an open book for him.

“The Golden Boy” is the more brutal striker and possesses a staggering six-inch height advantage. If Shahbazyan can strengthen his defense and loosen up so he isn’t so tense dispensing his offense, this should be a short night for him. Nine of his eleven wins have come by knockout, and he should deliver another one here.

Nothing against Lungiambula, but his recent form is lacking. He’s 2-4 since joining the UFC and has been finished three times. Though this is precisely the fight Shahbazyan coughs up, we’re taking him to get back on track with a first-round victory.

Rozenstruik vs. Daukaus was rescheduled from October for undisclosed reasons but doesn’t figure to be any different two months later. These are two big heavyweights trying to stay relevant and a knockout is coming one way or another. Rozenstruik has lost each time he’s stepped up to the top tier of the division but shines when matched with his peer group. Daukaus faces the same predicament as well.

They have 11 knockouts each, but their paths to power differ slightly. Rozenstruik is the heavier one-shot fighter who sits back and waits for a counter while Daukaus is a swarmer. Daukaus is the faster finisher of the two, but that carefree offense can play right into Rozenstruik’s heavy hands if he isn’t careful.

If we had to pick a winner, we see Rozenstruik landing that huge shot to put the former Philadelphia cop down for the count. But it’s also reasonable to bet on Daukaus blitzing him early and stopping him. Bet Under 1.5 rounds as part of a parlay.

Hernandez ran into a wall at lightweight and is coming down in weight to solve his problems. That’s usually a recipe for disaster, making Quarantillo the most attractive favorite on the preliminaries. Quarantillo is a sharp boxer with a black belt in BJJ, not to mention being a natural at the weight class.

While he can do good work on the ground, Quarantillo wants to keep the fight standing where he averages 7.74 significant strikes landed per minute and strafe Hernandez. Though Hernandez might be the bigger striker and can exploit Quarantillo’s average takedown defense, it’ll be hard to side with him after dropping weight against a busy fighter as opposed to a plodder.

We don’t think the change in scenery is going to help Hernandez vs. Quarantillo here. Expect Quarantillo to be too much too early for “The Great Ape” as he rains shot upon shot before leaving him unable to defend himself. Take the risk on Quarantillo drawing a stoppage for a +300 score. 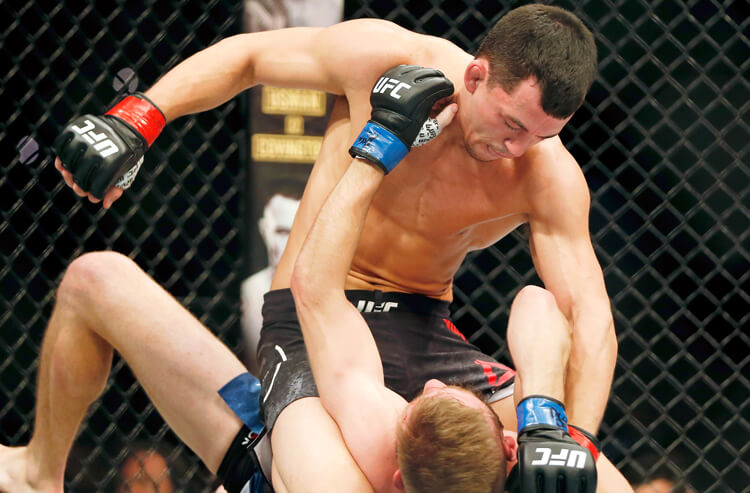