MMA Betting Guide - How to Bet on UFC

Betting on MMA — especially the UFC — is one of the fastest-growing markets at betting sites and sportsbooks around the world.

Mixed martial arts has a ravenous fanbase that loves to dive into the action, from betting on UFC Fight Night odds to the marquee cards on the UFC schedule as well as the smaller promotions such as Bellator and other international leagues.

How do you bet on UFC?

The menu for MMA betting isn’t as broad as other sports on the odds board and options will depend on the magnitude of the bout — title fights tend to stir up more betting markets — but most UFC betting options include these three types of bets:

The most common way to bet on MMA odds is to wager on which fighter will win the bout. Oddsmakers use head-to-head moneylines to set these markets, calculating an implied probability for each fighter and then setting a corresponding moneyline for that bet.

For example, FIGHTER A is the reigning champion and is riding a five-fight winning streak in which they’ve been dominant, including four knockout finishes. FIGHTER B is a veteran of the sport but their career is on a decline after splitting wins and losses in their last six bouts, including two bad defeats by knockout.

Some sportsbooks offer a three-way line on fight odds, with a DRAW match as a betting option. A draw doesn’t often occur and therefore carries a much higher potential payout than betting on which fighter will win.

Another popular MMA betting option is taking the Over/Under for round totals, allowing you to bet on when you think the fight will end.

For example, the bout between FIGHTER A vs. FIGHTER B is a championship match that is scheduled for five rounds. The round total is set at 3.5 (or the 2:30 mark of Round 3 as MMA rounds last five minutes).

But because FIGHTER A has the potential to end the fight early with a knockout and FIGHTER B has suffered some bad KO losses in recent outings, the Under 3.5 rounds has a higher implied probability and the vig is adjusted to reflect those chances.

If you want to get more specific with your UFC betting picks — and earn a larger payout — you can choose to bet on a fighter’s method of victory. Not only does the fighter you select have to win the bout, but they must also win via the method selected.

The most common method of victory options for MMA betting are:

• Win by knockout/TKO/DQ
• Win by submission
• Win by decision

Due to this betting market being more specific than the outright winner odds and harder to predict, each method of victory prop carries varying prices but do offer larger returns than the outright odds. The vig attached to each prop reflects the implied probability of each possible finish.

For example, if FIGHTER A is known for their knockout power, a bet on a KO/TKO/DQ win will not pay out as much as a win via submission or decision. If FIGHTER B is more a defensive expert with solid submission skills, their method of victory odds could see a higher implied probability toward a submission finish or a win on the judges’ scorecards.

Tip No. 1: Sizing up styles

It’s all right there in the name: “mixed” martial arts. That means that fighters of varying styles and practices bring their best to the cage, creating some very intriguing matchups. Some fighters are more upright strikers, who prefer to stand and deliver blows. Others are skilled in wrestling and jiu-jitsu, and attempt to take the fight to the mat to ground-and-pound or submit an opponent.

Looking at how these styles matchup and any advantages they give one fighter over the other are good ways to find value in the MMA betting odds. And, much like in boxing, stance — orthodox or southpaw — should be considered when handicapping a fight. Depending on the style of the combatants, Southpaw fighters  (left-handed fighters) can find themselves at an advantage versus orthodox fighters because often times they are not used to defending that type of stance.

Tip No. 2: Records and MMA math

A fighter’s record is one of the first pieces of data bettors look at when sizing up the UFC betting odds, but it’s also already factored into the numbers. Records can sometimes be deceiving, as it’s impossible to find out the quality of opponents simply by looking at the wins and losses.

Bettors will want to take a deeper dive into those results and the MMA news around those wins/losses. Perhaps a fighter’s defeats have come in closely-contested bouts against elite-level foes while their opponent has built an impressive resume but has done so against inferior competition. Those fighters who have been tested are often more prepared and can adapt quicker throughout the course of a fight than one that has yet to really be challenged.

Often times, bettors like to compare the record of two opponents and which foes they have won and lost against. Inside a particular weight class, there’s a lot of crossover in terms of opposition. One fighter may have lost to a past opponent that their current foe has defeated.

Plenty of fight fans want to do what is known as “MMA Math”: FIGHTER A lost to FIGHTER C, but FIGHTER B beat FIGHTER C… so FIGHTER B should beat FIGHTER A – right? That’s rarely the case and this thought process can mislead bettors, taking attention away from handicapping styles and studying fight film.

Mixed martial arts is a combat sport so it comes with its share of injuries. These can sideline a fighter for a few weeks, months, or even years. Bettors will want to look into how these injuries impact a fighter upon their return to the ring, getting as much information and UFC news from training camp reports and the media.

Some questions to pose when working this actionable information into your bets include:

Injuries, as well as contract negotiations and fight cancelations, can put extended time between bouts for some athletes. MMA bettors will want to consider the popular “ring rust” angle, seeing how that hiatus from in-ring action has impacted a fighter:

Knockout losses can also have a similar effect on fighters. While they may not have suffered a sustained physical injury due to a devastating KO defeat, they can become damaged mentally. Fighters coming off a knockout loss can become extra cautious and lose their edge inside the octagon, drastically changing their approach and style. MMA bettors should also beware of these situations when capping a fighter coming off a bad KO.

Tip No. 4: Weight and reach

Like boxing, MMA has multiple weight classes and fighters will move up and down in weight depending on success and competition. Some fighters are able to cut and maintain weight better than some, while others – especially those moving down in class – have a harder time making it under the limit.

Bettors should be mindful of fighters that struggle to make weight and their progress leading up to a fight. Weigh-ins are scheduled the day before a fight and those close to missing the cut can go through drastic measures to make sure they don’t tip the scales, including overtraining, starving, and dehydrating themselves. Late weight cuts can leave those fighters drained before the bell even rings.

Some fighters walk around much heavier than their designated weight class and can quickly bulk back up after a weigh-in, giving them an advantage against possibly smaller foes. Bettors should always note a fighter’s true weight class and that of their opponent.

Reach — the length of a fighter’s arm — is another key factor in handicapping MMA betting odds. A fighter with a longer reach can connect on more strikes without putting themselves too close to an opponent. Mismatches in reach should be stacked up with style matchups, finding strikers who can use their longer reach to land shots and limit their opponent’s chances.

What are the best UFC betting sites?

UFC betting popularity has soared in recent years and sportsbooks have been quick to increase their offerings. Pretty much all online sportsbooks will have a complete offering available for all UFC events. If you're looking for a trusted sportsbook for betting on UFC, check out our betting sites reviews. 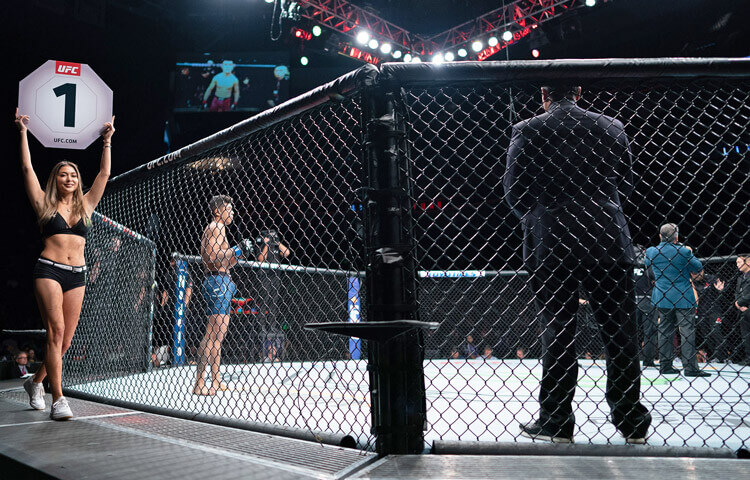 MMA Betting Guide - How to Bet on UFC
Provided by