Novak Djokovic hasn't consistently been on his A-game, but he's on the cusp of another major title with an implosion-prone opponent in his way. Find out why Nick Kyrgios won't go quietly, but the favorite will prevail in our Wimbledon men's final picks,

The polarizing Australian, a gargantuan underdog in Sunday’s final, will do his utmost to prove throngs of naysayers wrong.

Kyrgios has been waiting eight years to advance to the final at the All England Club and, considering his propensity to implode and self-destruct, might not get another opportunity to get one over on arguably the greatest grass-court champion.

Get our best betting picks and predictions for the Wimbledon men's final here.

Betting the Wimbledon Men's final? Here are two of the best bonuses* available:

It’s unlikely the first thing that pops to mind when you hear Kyrgios’ name has anything to do with his tennis ability.

More likely, mention of his name incites thoughts relating to his impetuous character and petulant on-court antics. He is nothing if not a rogue entity, an individual who does not conform, unapologetically conducting himself as he wants without regard for customs, rules or tradition. His name is synonymous with controversy.

Even with the most important moment of his career less than 24 hours away, Kyrgios faces an assault accusation in Australia from ex-girlfriend Chiara Passari.

Kyrgios said Wimbledon has helped take his mind off things in the land Down Under, but an allegation of such severity and potentially abject implications can involuntarily wreak havoc on one’s state of mind, especially with a once-in-a-lifetime opportunity beckoning.

Kyrgios took full advantage of an inferior Wimbledon draw to earn a place in the final, facing only one player ranked in the Top 30. That player — fourth-seeded Stefanos Tsitsipas — succumbed to Kyrgios’ infamous mind games. The usually level-headed Greek came undone, lost his cool and unraveled before everyone’s aghast, helpless eyes. Kyrgios also benefitted from Rafael Nadal having to pull out of their semi-final bout due to a minor abdominal tear.

Djokovic, known to throw one or two tantrums in his time — albeit on a much less obnoxious scale — will not make the same gullible, even naive mistakes Tsitsipas did. The Serb has seen it all before and knows precisely what to expect from the volatile, trouble-inciting Aussie.

It’s going to take a career-best performance for Kyrgios, the world No. 40, to prevent Djokovic from winning his seventh Wimbledon crown.

If Kyrgios is to pull off the mammoth upset, he will need to serve like an unerring robot and volley with deadly precision. He’ll also want to rely on his wickedly powerful backhand while avoiding his inconsistent, more tepid forehand.

Kyrgios must play aggressively, mitigate unforced errors and effectively push the tempo, forcing the breakneck serving pace he’s renowned for upon Djokovic. If he had his way, Kyrgios would serve to a vacant court before his opponent is able to return from toweling down.

Djokovic shouldn’t be vulnerable to Kyrgios’ innumerable antics. However, the world No. 3 hasn’t won a set in two previous encounters against him.

Both of those matches were played on hard court five years ago, which shouldn’t have any untoward residual impact on Djokovic’s psyche.

By no means has Djokovic enjoyed his most domineering fortnight at the All England Club. He struggled out of the gate, losing a set to 81st-ranked Soon-woo Kwon in the first round.

Djokovic settled down as the tournament progressed, but didn’t visibly come to life until Jannik Sinner had him on the brink of elimination in the quarterfinal. Down two sets, Djokovic showed his championship pedigree and impossible-to-put-down resilience.

After throwing away the first set in the semi-final against Cameron Norrie, Djokovic enjoyed his best tennis of the tournament, which included an outrageously successful lobbed tweener. The 35-year-old appears healthy and unwavering in his quest for a 21st major trophy.

That would put him just one behind Nadal with the US Open on tap. Nothing will get in Djoker’s way from achieving what he has been denied thus far in 2022, especially not a first-time finalist who is plagued by inconsistency and prone to instantaneous implosion.

Prediction: Djokovic to win (-400 at BetMGM)

Djokovic hasn’t been at his best and Kyrgios has shown more maturity, composure and consistency in the last two weeks than in seven years previous. The Australian’s serve is incredibly accurate – 70% on first serves – and is hit with formidable power and pace.

It has saved him countless times in previous rounds, including in the opening round against 219th-ranked Paul Jubb, when he prevailed in a tense five-set thriller. His torpedo-like first serve, which averages just over 120 mph, should be enough to ensure he doesn’t whittle away in straight sets. 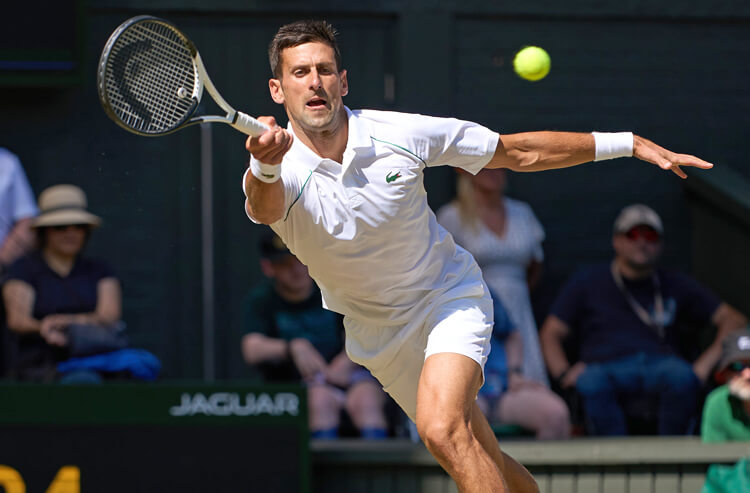