In what projects to be the more exciting of the two men's US Open semifinals, hometown hero Frances Tiafoe looks to advance past Spanish prodigy Carlos Alcaraz en route to his first Grand Slam final. Can he get the job done as an underdog?

Spanish prodigy Carlos Alcaraz showed every ounce of resilience to push past Jannik Sinner and now faces the in-form Frances Tiafoe with a place in the US Open final on the line.

Tiafoe, who got past Rafael Nadal in four sets and stormed by Andrey Rublev in a snappy three-set quarterfinal, is also making his first Grand Slam semifinal appearance.

Tiafoe looks to become the first American to win a major since Andy Roddick triumphed at Flushing Meadows 19 years ago. Can he take down the Spanish stud as an underdog?

Read our US Open betting picks and predictions to find out.

Betting the US Open men's semifinal? Here are two of the best bonuses* available:

Alcaraz outlasted Sinner in the US Open’s second-longest match (5 hrs 15 min) and has just 36 hours to recover before returning to Arthur Ashe for what promises to be an electrifying semifinal. The world No. 4 beat Sinner for the first time in three tries to secure his first Grand Slam semifinal berth.

The intriguing, all-anticipated matchup showcases two players performing at their most imperious.

Alcaraz has an irrepressible thirst to be the best and is often compared to Nadal, even though the Spaniards have altogether contrasting styles. The 19-year-old wunderkind enjoyed a straightforward progression to the Round of 16, not dropping a set before meeting former US Open winner Marin Cilic.

Cilic pushed the teenage sensation to the brink in an almost-four-hour, five-set tussle. Alcaraz’s athleticism, youth, and ability to return a staggering amount of seemingly lost causes proved the difference.

Alcaraz then ascended even higher against Sinner in the quarterfinal, coming from a set down to defeat one of his main rivals in the wee hours of the New York morning.

Under ordinary circumstances, Alcaraz’s robot-like strength, effervescent exuberance, seemingly malleable limbs, and the will to become the world’s No. 1 player would easily be enough to counteract two late-night marathons.

However, Alcaraz faces a man with destiny on his mind.

Tiafoe is playing like an unstoppable force. The 24-year-old is conducting himself with outrageous swagger, making nigh-impossible drop shots look like child’s play. He is fresh, lapping it up, brimming with confidence, and has a wholly partisan crowd providing unwavering, riotous support.

Tiafoe has been broken once all tournament, held serve in 17 straight games against Rublev in the quarterfinal, and has conceded just one set, to Nadal of all people. He is also highlighting his broad range of weapons and, unlike most players, won’t be afraid of going toe-to-toe with the lightning-quick Alcaraz.

Tiafoe is also demonstrating a new level of maturity and professionalism, all with a beaming smile. The American won the only previous head-to-head contest, beating Alcaraz on clay, the Spaniard’s preferred surface, and on the 19-year-old’s home soil to boot. However, that match occurred in 2021, which felt like a lifetime ago.

Alcaraz has won four titles in 2022, three of which were on clay. Since losing to Tiafoe in Barcelona, Alcaraz has soared from 120th to fourth in the world rankings.

Tiafoe sourced a newfound devotion to the game and now concentrates solely on tennis. While he hasn’t won a title since 2018, Tiafoe has climbed almost 40 ranking positions, from 64th to 26th, since their only previous head-to-head battle.

The boisterous Arthur Ashe crowd will spur the American on, especially if he comes flying out of the gates. A quick start is crucial if he is going to pull off the upset.

Sometimes people forget that Alcaraz is still only 19 years old. While he recovers quickly, sometimes, he goes for too much from the baseline. As a result, he is susceptible to periods of inconsistency, albeit fleetingly.

Tiafoe needs to up the tempo, which seems counterintuitive against one of tennis’ most formidable athletic specimens. However, despite his otherworldly prodigiousness, Alcaraz has been through the wringer in his last two encounters.

And Tiafoe is just as impressive in terms of raw athleticism. Tiafoe won’t have another opportunity like this. With everything falling into place for the affable American at precisely the right time, it’s his time to make history.

Pick: Frances Tiafoe to win in four sets (+525 at BetMGM) 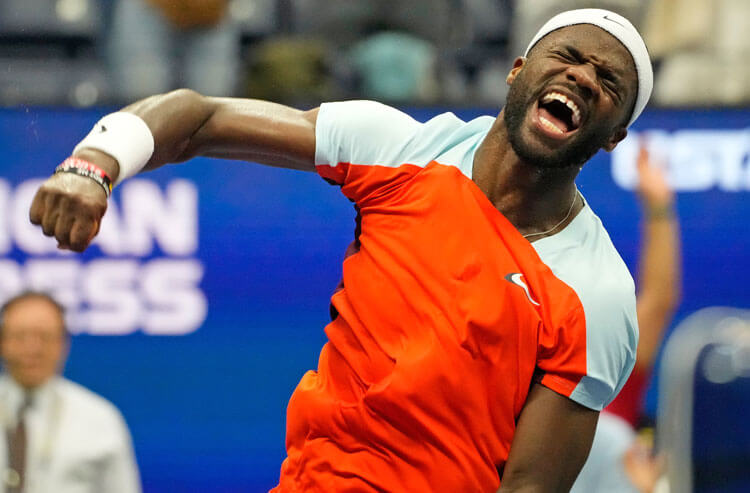