The most anticipated two weeks of the abbreviated grass-court season are upon us, with Wimbledon set to take center stage. Read below to absorb a comprehensive betting preview, as we break down the favorites, sleepers, and more ahead of this year's action.

Novak Djokovic, the massive -125 favorite, returns to The Championships looking to win his fourth successive and seventh Wimbledon crown.

The Serbian will have to withstand the advances of a few key contenders, including arch-nemesis Rafael Nadal (+800), 19-year-old Carlos Alcaraz (+950) and world No. 6 Matteo Berrettini (+600).

We break it all down in our comprehensive betting preview ahead of this year's Wimbledon action.

Odds courtesy of DraftKings Sportsbook as of June 22, 2022.

By no means is Djokovic starting the defense of his Wimbledon crown in vintage form. He only has one title to his name in 2022 (the Italian Open) and carries a comparatively underwhelming  16-5 calendar-year record into Wimbledon.

However, the 20-time Grand Slam winner saves his best for the All England Club. His almost-unrivaled Wimbledon experience and sheer will to close the Grand Slam gap on Rafael Nadal will invariably spur him on.

To rest his mind, body, and soul, the Serbian decided not to partake in a warm-up tournament leading up to the showcase grass-court event. His last match was his quarterfinal defeat at the French Open to eventual champion Nadal.

Rust won’t be an issue for Djokovic, who instinctively elevates his level at this time of year. He will yet again find a way to conjure his best on grass and vanquish several recent setbacks to lift his fourth successive Wimbledon trophy.

Matteo Berrettini enters Wimbledon on the back of a second consecutive cinch Championships triumph. The world No. 10 swatted aside Filip Krajinovic 7-5, 6-4 in the final at the Queen’s Club.

The Italian is the only player in Open Era history to win his first two appearances at the Queen’s Club. Berrettini also won the only Stuttgart Open earlier in June, making it 2-for-2 on grass-court tournaments this season.

That bodes extremely well for the 26-year-old, who is a staggering 20-1 on his favorite surface since the start of 2021. His only setback occurred at the 2021 Wimbledon Final when Djokovic beat him in four sets.

We’d be remiss not to discuss the imperious Spaniard’s Wimbledon hopes. Nadal won his 22nd Grand Slam title and 14th at Roland Garros last month. He is a seemingly supernatural force who conquers potentially soul-crushing adversity like others do rudimentary crosswords.

However, the two-time Wimbledon champion, who recently confirmed his participation at the All England Club, enters the year’s third Grand Slam more banged up than a prized UFC fighter after a championship bout.

The 36-year-old Spaniard miraculously overcame a debilitating foot injury to prevail at the French Open and also sustained a stress fracture to his ribs earlier in the season. Of course, you’d be silly to count Nadal out, but winning Wimbledon could be a task even too tall for the indomitable Spaniard.

The world No. 6 Greek has only one title – the Monte Carlo Masters – to his name in 2022 and has never made it past the fourth round at Wimbledon. The 2022 Championship will mark his fifth time at the All England Club, with all but one previous appearance resulting in a first-round exit.

Stefanos Tsitsipas, at the time of writing, advanced to the quarterfinal at the Mallorca Open, so there’s a chance he’ll prevail there. Previously making it to four Grand Slam semifinals, three at the Australian Open and one at the French Open, the 23-year-old is still searching for his first berth at a major final.

If you’re signing up for a new sportsbook for Wimbledon 2022 betting, here are two of the best bonuses* available:

The 19-year-old Spanish phenom has enjoyed a breakout year in 2022, winning four tournaments and advancing to the quarterfinals of a Grand Slam for the first time. Four of the teenager’s five tour titles have come in the current calendar year, three of which came on clay.

While his current fourth-favorite status would ordinarily preclude him from being considered a sleeper, Alcaraz’s palpable inexperience on grass sets a precedent for an exclusion to the rule.

A few key variables will prevent the clay-court specialist from lifting his first major trophy. Alcaraz pulled out of the Queen’s Club Championships due to a niggling elbow injury, which he says will be fully healed for Wimbledon.

While the Spaniard is certainly on the cusp of Grand Slam glory, his lack of grass-court experience will lead to his Wimbledon downfall. He has played just two matches on grass since turning pro, both of which came at Wimbledon last season.

The hard-serving Canadian has the ability to worry anyone when he isn’t dogged by hitting an inordinate number of unforced errors. Auger-Aliassime pushed Nadal to his exceedingly high limits at the French Open. The No. 9-ranked Canadian became only the third player to force Nadal into a fifth and decisive set at Roland Garros.

If he can find consistency and hit a two-to-one winners-to-errors ratio, Auger-Aliassime could make a run. The 21-year-old made it to last season’s Wimbledon quarterfinal, the deepest he’s advanced at the All England Club.

Hubert Hurkacz, currently ranked No. 10 in the world, might just do some damage at his fourth Wimbledon. The 25-year-old just won his first tournament of the year at the Halle Open, a preparatory grass-court tournament.

He also advanced to the 2021 Wimbledon semifinals in just his third appearance at The Championship, where he lost to Berrettini in four sets. He thrives on hard surfaces and, to ensure the quickest possible conditions, will hope England is affected by drought-like weather for the next fortnight.

Fairy tales have been known to come true before, but in Andy Murray’s case, the 2022 version of Wimbledon will not represent a happy ending for the former two-time champion.

While Murray made a somewhat improbable run to the Stuttgart Open final recently, he doesn’t have the physical endurance, agility, or dynamism to make a deep run at The Championships.

Forced to pull out of Queen’s thanks to an abdominal injury, the 35-year-old is plagued by his dilapidated body. His run of not advancing past Wimbledon’s third round since 2017 will continue in 2022.

The mercurial Australian has more God-given talent than most players on tour. But, and this is a Kim Kardashian-size but, he quite simply doesn’t have the temperament or mental fortitude required to be a Wimbledon champion.

He is fitted with a formidable ground stroke that strikes fear into even the most adept defensive players and can beat anyone on his day. However, Nick Kyrgios is his own worst enemy, which he’ll once again prove when his demons get the better of him. The only thing unclear is what round he’ll progress to before becoming unhinged.

Players unbeaten on grass this season going into Wimbledon

Berrettini, who triumphed at the Stuttgart Open and at the Queen’s Club, and Hurkacz, who won the Halle Open, are the only two undefeated players on grass court in 2022 entering Wimbledon.

If Djokovic lives up to his favorite status, he’ll become the third player in Open Era history to win four straight at the All England Club.

There was no winner in 2020 as the tournament was canceled due to Covid-19.

Nadal has never missed Wimbledon after winning the French Open. The only exception was in 2020 when Wimbledon was canceled. In the 12 Wimbledon Championships after a French Open title, Nadal has won two and finished second on three occasions. You have to go back to 2010 to find the last time he won the tournaments back-to-back. 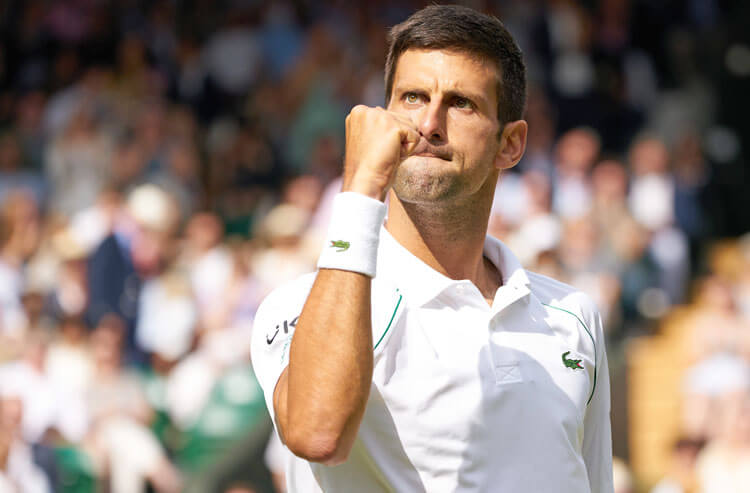 2022 French Open Odds: Can Nadal Reclaim Clay Crown?
Chris Gregory | May 20, 2022
About Us
Contact Us
Careers
Our Team
Brand
Testimonials