Ecuador vs Senegal World Cup Picks and Predictions: One Point is Enough for La Tri

While Senegal needs all three points in this Group A matchup, Ecuador needs just one to advance to the Round of 16. An adjusted game plan and some cagey defense should allow La Tri to secure that point when all is said and done on Tuesday.

The stakes are high as Senegal and Ecuador collide in Al Rayyan on Tuesday, with only one of these teams likely to reach the knockout rounds of the World Cup.

Senegal took care of business against Qatar on Friday to stay alive in Group A, with Boulaye Dia, Famara Diedhiou, and Bamba Dieng all on target in a 3-1 win. But with the Netherlands expected to beat Qatar in their final group game, Senegal needs three points here.

After a resilient 1-1 draw against the Netherlands, the equation for Ecuador is simpler — or, at least, less daunting. A point here will see La Tri through to the Round of 16, though they’re sweating on the fitness of key man Enner Valencia.

Check out our World Cup picks and predictions for Ecuador vs. Senegal below for everything you need to know ahead of Tuesday's showdown.

Ecuador vs Senegal picks and predictions

Ecuador only needs a point to clinch a major accomplishment. La Tri have never progressed further than the Round of 16 and this squad has a real shot at a deep run.

With so much on the line, I expect Alfaro to employ a cautious game plan, with his team content to soak up pressure and lean on their speed in transition. A draw would suit Ecuador just fine – and that’s how I see this game unfolding.

On the other side, this is a Senegal team without Sadio Mane and it took them over 40 minutes to break through against Qatar. In fact, the Lions of Teranga could easily have been trailing before halftime if the host nation hadn’t been denied a strong penalty appeal.

I thought Ecuador proved a point against the Netherlands, fighting back after falling behind – and on another day, the South Americans might have grabbed all three points. Valencia was again the goalscoring hero, netting his third of the tournament before being stretchered off in the final minutes.

Question marks over Valencia’s fitness are another reason to take a long look at the draw here. Both teams may be short on cutting edge in the final third, so look for the defenses to be on top throughout. If the score is tied at the hour mark, it’s hard to believe that Ecuador will push too hard for a winner – instead, look for defensive substitutions to grind out a result.

Senegal showed signs of life against Qatar, but this Ecuador team is fearless and well-organized. I like Gustavo Alfaro’s side to get the point they need on Tuesday.

A) Ismaila Sarr anytime goal, match result is draw or Senegal, and both teams to score BOOSTED to +850 at bet365! Bet Now

B) Enner Valencia and Boulaye Dia each score BOOSTED to +950 at Caesars! Bet Now

Ecuador vs Senegal side analysis

There’s so much to like about the way Ecuador approaches games – and La Tri look the stronger side even if Valencia is sidelined.

Of course, while they only need a point to book a spot in the Round of 16, a comfortable win here might be enough to bag the top spot in Group A and (potentially) an easier start to the knockout rounds. But Ecuador won’t know the final Group B standings – and the possible opponents – until later on Tuesday.

Senegal has the defensive leaders to pull off an upset here if it gets the right breaks in attack. Kalidou Koulibaly and Edouard Mendy give the Lions of Teranga a chance against anyone, but it remains to be seen whether the sharp-shooting second half against Qatar is repeatable on Tuesday against a confident Ecuador team.

That’s why a stalemate stands out to me as the likeliest outcome. Both teams are physical and hard-working, and a cagey battle lies ahead.

If not Valencia, then who? That’s the question that Ecuador will need to answer if its star striker is unavailable after aggravating a knee injury late in the 1-1 draw with the Netherlands. Valencia immediately had ice packs on his knee and this final group game may come too soon for him.

That would leave a big void for La Tri to fill. Valencia has scored all three of their goals at this tournament and his experience is invaluable for a young squad. Moises Caicedo’s attacking bursts will be even more critical in this final group game.

As covered earlier, this showdown feels like a defensive scrap. Both teams excel at the back and I anticipate chances will come at a premium. I’ll certainly be wagering on the Under, with the Under 2.5 or Under 1.5 goals worth consideration.

Given what we’ve seen so far in Group A, it would be a shock if this turns into an end-to-end thriller. 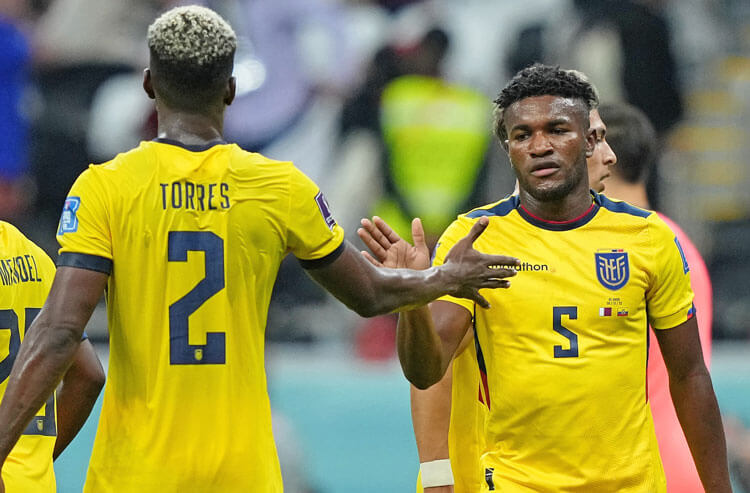 Ecuador vs Senegal World Cup Picks and Predictions: One Point is Enough for La Tri
Provided by