Belgium enter the final group stage game in need of a win to secure progression — with them and Croatia potentially looking at an early exit. Our World Cup betting picks highlight the value in the final-game dramatics of Croatia vs. Belgium.

It's all on the line in the third and final matchday for Group F at the 2022 World Cup.

Group leaders Croatia are ahead of second-place Morocco on goal difference but with Belgium just a point behind, the fates of both teams could flip entirely over the course of 90 minutes. That reality is shown in the World Cup odds, which don't favor either side here.

There's no chaos quite like the final round of games in group play and that's sure to ring true as a pair of semifinalists from four years ago collide. Get set for this compelling matchup with our Croatia vs. Belgium World Cup picks and predictions, ahead of kickoff on December 1.

Croatia vs Belgium picks and predictions

It's not a coincidence that, after having more 0-0 draws in the first two rounds of games in the group stage than there was in all of the 2018 World Cup, the group stage has come alive with goals in each game since Saturday. There's no more time to be cautious and allow the group stage to unfold.

That's certainly true for a Belgian side that cannot rely on a draw to secure progression, with a worse goal difference than Croatia and Morocco, both a point ahead. Belgium are going to have to attack in this game from the first whistle and set out to take all three points.

Finding goals is something Belgium have done consistently under Roberto Martinez. In fact, Belgium's 2-0 loss to Morocco in their previous game was just their third scoreless effort in a competitive fixture since Martinez took over in August 2016. For as poor as Belgium were against Morocco, they still created a fair bit with 1.0 expected goals from three shots on target and 20 shot-creating actions.

Though Kevin De Bruyne has been far from his best and Romelu Lukaku was only able to play the last 10 minutes off the bench vs. Morocco as he recovers from injury, one has to think Belgium will score against Croatia. Between the pure ability they have across their attack and in midfield, the cohesion this group has playing together, and the urgency with which they'll have to attack, the chances will be endless.

That front-footed approach will, however, leave them open to counterattacks. Between the control and range of Croatia's midfield three and the lack of pace from Belgium's high defensive line, the Croatians should be able to exploit Belgium pushing numbers forward, and find a decisive pass to score and make Belgium's path to progression more complicated.

B) Croatia to win and both teams to score BOOSTED to +500 at Betway! Bet Now

Croatia vs Belgium side analysis

I'm not touching a side here.

Not with the unpredictability that often marks the conclusion of the group stage.

And, above all else, not with the outlook here. Croatia have been far better than Belgium, who spent 90 minutes pinned back by Canada before being beaten with ease by Morocco. However, I'm not betting against this Belgian team, who has reached No. 1 in the world status and spent the better part of a decade trying to get over the hump together, with their backs against the wall.

I'm going to sit back and watch this unfold without a dog in the fight.

With my best bet being both teams to score, and Belgium needing to go for three points, it's not a surprise that I am looking at the Over (+100) on the 2.5-goal total. Despite Croatia's best efforts, this figures to be an open, expansive game with quality in both attacks.

In addition to the Over and BTTS, I'm going to round out the goals market with the second half to be the highest scoring at +100 (first half +225/tie +250). As the game progresses, Belgium could very well need to push more and more numbers forward — making it more likely both for them to break Croatia down, and for Croatia to catch them out.

Croatia: None.
Belgium: None. 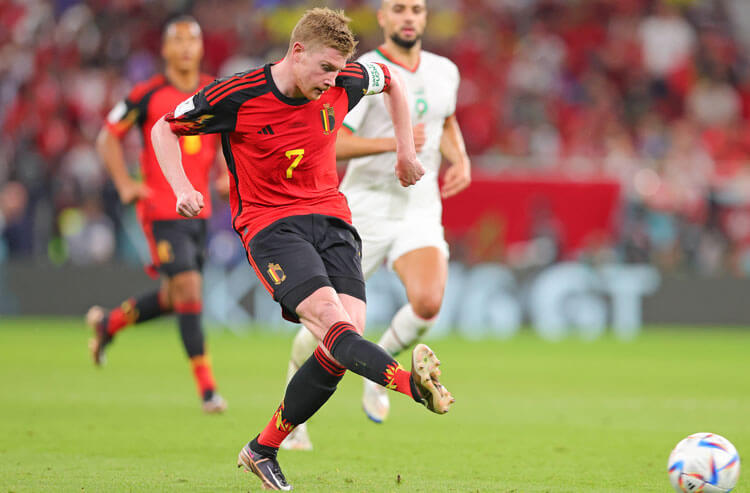 Croatia vs Belgium World Cup Picks and Predictions: The Last Dance
Provided by