Tottenham vs Leeds Picks and Predictions: A New Beginning for Spurs Starts Brightly

Tottenham were a ghost ship just weeks ago but with new manager Antonio Conte at the helm, expectations and performances will be boosted considerably. Conte's Spurs are bad news for struggling Leeds United, as our Premier League betting picks highlight.

The best game of the weekend in Premier League betting may come in London, where No. 9 in the table Tottenham host No. 15 Leeds. With both sides getting off to underwhelming starts, we wouldn't have expected a must-watch matchup but it's a different story now.

Under Marcelo Bielsa, Leeds have been a relentlessly entertaining team to watch. Spurs, meanwhile, have been the dullest team in the country but this isn't the dying star that was Nuno's Spurs, nor the doomed experiment that was Jose Mourinho's Spurs. Antonio Conte is at the helm, and that means thrilling chaos on the touchline and the pitch.

Here are our free soccer picks and predictions for Tottenham vs. Leeds.

Clear skies are forecast for Sunday in London, with no rain forecast on a partly cloudy day. Temperatures are expected to be around 45 degrees Fahrenheit at kickoff.

With a quick turnaround, Conte managed Spurs to a 0-0 draw away to Everton prior to the international break, with the visitors topping the hosts 0.8 to 0.5 in expected goals. With several weeks gone by, Tottenham will more closely resemble a Conte team moving forward, and that's bad news for Leeds.

A serial winner, Conte was last seen in the Premier League winning the title with Chelsea in a dominant season for the Blues. He then pulled off the incredible in Italy, bringing Inter Milan back to the mountain top in a similarly dominant Serie A title campaign.

Both of these teams, as Spurs will soon show as well, had the hallmarks of a Conte team, with set attacking patterns built around a vital attacker (with Chelsea, Diego Costa and with Inter, Romelu Lukaku) which he has in Harry Kane, and a strong three-man backline and wing-backs flanking the trio. Conte's teams consistently strike a lethal balance as they are so dangerous going forward but never expose themselves in defense.

Tottenham will have a great chance at a first Premier League win under Conte on Sunday. For as well-coached as Leeds are, with Bielsa's reputation and influence eye-to-eye with Conte's, they have gotten off to a terrible start with just 11 points from 11 games. They've leaked goals at an alarming rate, conceding the sixth-most xG and fifth-most goals, haven't been as dangerous going forward, and have had to deal with a constant churn with squad injuries.

The constant need to juggle the starting 11 will continue for Leeds in London on Sunday, as three of their most important players, Luke Ayling, Patrick Bamford, and Robin Koch, remain out. A full-strength Leeds team against Nuno's Spurs would have had a great chance of getting a result but a depleted Leeds team against Conte's new squad faces a long 90 minutes.

While there should be plenty of optimism around Spurs' attack coming back into form as Conte's fingerprints spread across the squad, the way his squads attack is so detailed that it may be slower to come than defensive stability.

Plus, Tottenham have a considerably further way to come in attack than in defense, as they've been terrible going forward this year. Only 20th Norwich City have scored fewer goals than Spurs' nine this year, while 19th Newcastle join Norwich as the only teams to have created fewer xG than Tottenham. Between previous manager Nuno's timid approach and the attacking talent they have in place, there will no doubt be an attacking improvement, but it'll take time. Defensively, they have been more solid, tied for 11th in goals conceded while they're an impressive seventh in xG against.

As mentioned, Leeds' attack has suffered greatly this year, as winger Raphina has been their only source of a consistent threat going forward. Patrick Bamford, whose ability to either hold the ball up or drop deep, collect, and play wingers in behind, has been limited to just five appearances in the league and remains out.

Leeds are scoring 0.63 fewer goals and creating 0.21 fewer xG per game compared to last year, while they are creating nearly 1.0 fewer shot- and goal-creating actions per 90 minutes.

With a defensively stout side in Spurs at home against a Leeds team severely limited in attack, it's difficult to take the Over on a goal total of 2.5.

At this point, Kane's dreadful start to the season is common knowledge. With a heartbreaking defeat in the finals at Euro 2020 and a failed transfer push behind him, Kane has limped out of the gates this year with one goal in 10 Premier League games, putting in anonymous performance after anonymous performance.

However, there's reason to believe Kane will regain his footing upon the resumption of the Prem this weekend. The England captain is coming off an unbelievable two-game stretch for his country, scoring seven goals and adding an assist in just over two hours of playing time as England punched their ticket to the 2022 World Cup.

In England's 5-0 win over Albania, in which Kane scored three and assisted one in 62 minutes, he put on a classic performance. Not only was the Golden Boot winner clinical but he was often involved in the build-up, he was spry, and really, he looked actually healthy for the first time since the spring. He would follow up that performance with four goals in 61 minutes as England beat San Marino 10-0.

While the level of competition in those games is an obvious caveat, the goals are ultimately beside the point. Even while scoring at the Euros, Kane didn't appear to be at full fitness. He certainly hasn't looked that way for Spurs so far this season. For England last week, he did, and under Conte, he will be forced to be, such are the demands the Italian has for his players. A fully fit Kane is the best striker in the Prem and one who is a serial goalscorer. 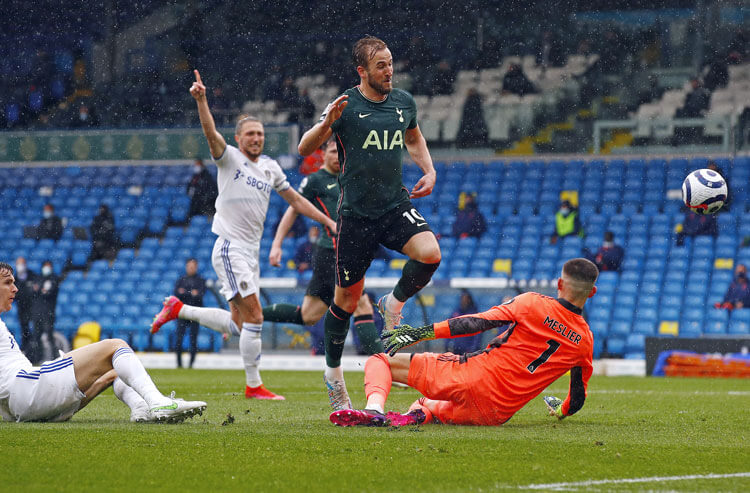 Tottenham vs Leeds Picks and Predictions: A New Beginning for Spurs Starts Brightly
Provided by