Tottenham vs Burnley Picks and Predictions: Spurs' Super Trio Too Much for Burnley

It's crunch time for both clubs in North London on Sunday, with Tottenham pushing for Top 4 and Burnley scrapping for survival. The Clarets have fought admirably but our EPL picks expect this match to go according to plan for Spurs.

With the Premier League season winding towards an end, we’re starting to see a number of games with nothing riding on them. That certainly isn’t the case with the first game on Sunday’s slate as Spurs welcome Burnley to the Tottenham Hotspur Stadium with both clubs battling at different ends of the table.

For Spurs, it’s a battle for Champions League action next season but for Burnley, it’s about survival in the Premier League itself. Who’ll come out on top? Don’t miss our Tottenham Hotspur vs. Burnley picks and predictions to find out.

It’ll be a wet morning in North London but by the time of kickoff, midday at local time, the rain should have subsided, and temperatures will be around 65 degrees.

Spurs come into this game in brilliant form, not losing in their past four games and beating hated rivals Arsenal 3-0 on Thursday. Spurs were clinical and when Arsenal went down to 10 with just 33 minutes gone there was only one result. Now they’re one point behind Arsenal and in the hunt for that fourth place which will give them Champions League entry for next season.

For Burnley, it’s a very different type of battle with the club in a three-team race to avoid relegation. Coming into the weekend, Leeds are 18th, Burnley are tied with them on points but have a superior goal difference and one game in hand. Then two points above them are Everton, also with a game in hand on Leeds. A win here would pile on the pressure ahead of Leeds’ game later in the day and a loss there for Leeds would all but secure their relegation. The motivation, as you can imagine, is huge for Burnley here.

Burnley will stick with the 4-4-2 that they’re well known for using. Some, myself included, were skeptical of the sacking of Sean Dyche but it’s got to be said that new manager Michael Jackson has done very well. His biggest issue on Sunday is that he is likely playing Nathan Collins and Kevin Long at the heart of defense due to injuries. Those two, with Connor Roberts and Charlie Taylor on either side at fullback, are not going to put any fear into Spurs’ attackers.

If Burnley have any hope, it’s going to rely on Josh Brownhill and Jack Cork playing at their absolute best in midfield and keeping Burnley’s makeshift defense out of trouble. That could be possible with Brownhill in particular playing fantastically recently.

Spurs will likely send out the same team as they did in the North London Derby except for Davinson Sanchez, who’ll come in for Cristian Romero. Romero will be a huge loss and he’s been a brilliant addition to Spurs’ team since arriving in the summer. He’s added a steel and ferocity that they’d been lacking for a long time and his absence will make things easier for Burnley’s Wout Weghorst.

What this game will come down to, as it did in the North London Derby, are two things coaching and firepower and that’s where Spurs come into their own. Antonio Conte had a rocky start when he first arrived at Spurs but it’s clear that his methods have got through to the players and they’re really fighting for him. This team now has a winner’s mentality and that’s an issue for Burnley.

With Spurs’ attacking trio of Harry Kane, Son Heung-Min, and Dejan Kulusevski in such great attacking form and facing a makeshift Burnley defense, there’s only one result here. Spurs have won eight of their last nine against Burnley in all competitions and they’ll do it again here.

Spurs have been in great goalscoring form as we saw in the 3-0 win over Arsenal. They’ve now scored two or more goals in 11 of their last 13 home games in the league and there have been over 2.5 goals in five of their past six Premier League games at the Tottenham Hotspur Stadium.

Burnley will try their best to put all 11 men behind the ball and hit Spurs on the counter, but it probably won’t be enough to keep this from being a high scoring game, with an incredible 72.2% of Spurs’ home games in the Premier League going Over 2.5 goals here. With their strike force in great form, you can see that happening again.

If you’re looking for the lock of the game, then you’re better off backing Spurs to win, but I’m not somebody to call a -295 my best bet. Instead, I’ll suggest backing Burnley’s Kevin Long to get booked.

Who is Kevin Long, you ask? Well, that’s a good question. The 31-year-old has been at the club for 12 years but totaled only 66 appearances in that time and has spent a lot of time out on loan at other clubs. He's started just one game in the Premier League this season and added another two appearances from the bench, one of which was in the last game when he was forced to come on for James Tarkowski

At +275, you’re getting great value on Long to get booked. He’s going to have a long day at the heart of defense dealing with Son, Kulusevski, and Kane, and has a great chance of getting booked. Those chances only increase with Kevin Friend officiating the game, with Friend dishing out an average of 4.44 yellows per game in the Premier League this season.

If Long does start, then the +275 for him to get booked will look like a bargain. It’s well worth backing at that price. 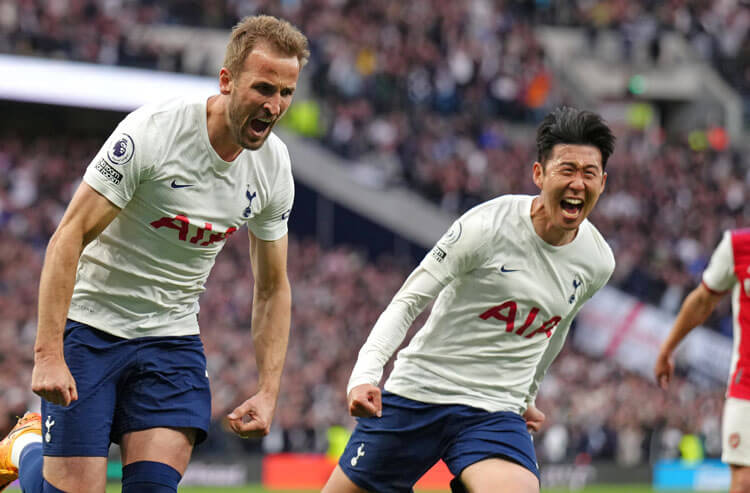 Tottenham vs Burnley Picks and Predictions: Spurs' Super Trio Too Much for Burnley
Provided by