Everton vs Brentford Picks and Predictions: Everton Fight for Their Right

Everton are in danger of relegation and will be fighting for their EPL lives Sunday. Find out why that motivation should inspire a strong effort at home, as we break down our EPL betting picks for Everton vs. Brentfort.

The final game of Sunday’s Premier League slate gives us another drama- and action-packed game as Everton welcome Brentford to Goodison Park. Visitors Brentford can enjoy the game knowing they’ll be in the Premier League next season, but for Everton, things aren’t certain and this game could have a gigantic reckoning on their future.

There really is everything to play for. Don’t miss our Everton vs. Brentford EPL picks and predictions for May 15 to find out.

It could pile the misery on for Everton, but it’s going to be a wet day in Liverpool and temperatures around 60 degrees.

No disrespect to Brentford, who have been a superb and enjoyable addition to the Premier League this season, but this game isn’t really about them. They can be happy about their debut season in the top flight and get ready to enjoy their summer break before doing it all again next year.

For Everton, this game is all about having the chance to do it again next year — something which isn’t guaranteed. So, what do we know about the relegation battle? Well, Norwich City and Watford are down, that’s for certain, which leaves Everton, Burnley and Leeds in a battle to avoid that final spot and the dreading drop down to play in the Championship.

It would be a disaster for a club like Everton to be relegated — they’re a Premier League mainstay and a club with real ambition. But it’s possible. Coming into the weekend, Burnley and Everton have three games remaining to play with Leeds having just two. Burnley are first to kick off on Sunday facing a tough road trip to play Tottenham, later Leeds welcome Brighton to Elland Road before Everton face Brentford in the final game of the day.

There are all sorts of permutations, but if Leeds were to lose or even draw, then an Everton win would secure their status in the Premier League next year. If Leeds win and Burnley get anything from the Spurs game, then it really piles pressure on Frank Lampard’s team and a defeat could put them in a very dangerous position. This game really is everything.

With that in mind, we’ll expect to see Lampard truly be cautious. He’ll set his team up in the same fashion he has recently, a formation which is somewhere between a 3-4-3 and a 5-4-1.

The back three of Mason Holgate, Seamus Coleman and Michael Keane will be supporting by their wingbacks who’ll drop in to make it five at the back. Allan and Abdoulaye Doucoure will sit and anchor the midfield, making sure to screen the backline and distribute forward. That’ll leave the wingers — likely Demarai Gray and Anthony Gordon — with an important role in both getting up to support Richarlison but also getting back and keeping the defensive shape.

Brentford will be in the 4-3-3 they’ve favored of late, and Thomas Frank will hope that Christian Eriksen can keep up the majestic form that he’s shown all year. Everton’s biggest threat is Eriksen’s creativity, and the deadly finishing of Ivan Toney. Everton’s defense has been in shambles at times this season and they need to lock down Toney because he will score if they allow him the opportunity.

Everton seemed to struggle under Frank Lampard initially, but there has been progress. Defeats to both Liverpool and Man City might not look impressive on paper but it showed that the side had guts and heart and could be effective defensively against elite competition.

Everton haven’t lost in the three games since that Liverpool defeat and have picked up seven points beating both Leicester and Chelsea. That speaks well of the commitment of this team and the work that Lampard has done. Young winger Gordon has been one of the biggest benefactors since Lampard’s arrival. The 20-year old has been one of Everton’s best performers, and the local boy looks like a future England international.

Everton’s faithful fans have started to believe and Goodison Park will be rocking come kick-off on Sunday. The atmosphere is going to be special and I believe that it’ll help push the players forward. If results fall their way earlier in the day, then this game could result in them staying in the Premier League. With Brentford having nothing to play for I’m expecting Everton’s desire to be too much and for them to get the all-important three points.

This game is so crucial for Everton that I can’t see Frank Lampard employing any tactics which are going to allow Brentford plenty of opportunities to score.

Over the past six games at Goodison Park, we haven’t seen many goals, with all games finishing with Under 2.5 goals. This should follow that pattern and I’m expecting a narrow 1-0 or 2-0 win for Everton, so back Under 2.5 here.

It’s hard to pick a best bet for this game but the one which looks the most attractive is for Mason Holgate to get booked. The 25-year old came through the ranks at the club and he knows more than most how important it is that Everton stay in the Premier League.

In truth, he’s looked poor at times this season, but you can’t deny he’s played with heart and I expect that to continue on Sunday. In just 20 Premier League starts this season he’s picked up seven yellow cards and a red, including two yellows in the past three games.

With the pressure riding on this game, I think we can expect to see Everton defenders do whatever is necessary to keep Brentford — and in particular Toney — away from their goal. Given Holgate’s record, he makes the most sense as the Everton defender to back getting booked. 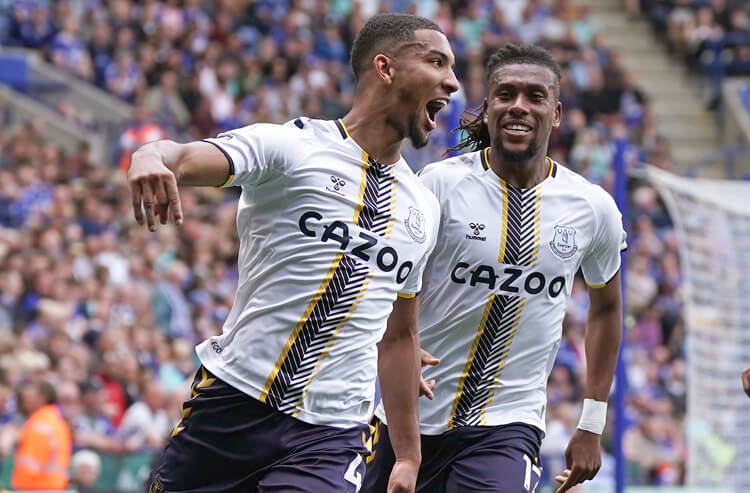 Everton vs Brentford Picks and Predictions: Everton Fight for Their Right
Provided by