Manchester United vs Liverpool Picks and Predictions: More Nightmares at the Theater of Dreams?

Manchester United salvaged a win midweek but get no time to enjoy it, as their historic rivals Liverpool visit Old Trafford for the latest chapter. Find out if Man U can hand Liverpool their first defeat of the season with our soccer betting picks.

One of England's most famous rivalries will close out the weekend of Premier League betting, as a red-hot Liverpool team visits Old Trafford to play Manchester United.

Man U clawed back from the brink midweek, rescuing a win from the jaws of defeat against Italian darlings Atalanta, but the good times will be short-lived as their historic nemesis comes in flying high.

Can the Red Devils do damage to the Reds' title hopes? Find out with our free Premier League betting picks and predictions for Manchester United vs. Liverpool on October 24.

USA: All set for an EPL clash of the titans this Sunday, as Liverpool go to Manchester United? Get a risk-free bet up to $1,000 when you register and play at TwinSpires. Claim Now

Canada: A fan of the beautiful game? 888sport has your soccer needs covered! Sign-up now and get a first deposit bonus up to $250 plus a $10 Casino bonus. Claim Now

Showers will rain down on Manchester throughout Sunday and continue at kickoff and during the match. Temperatures are expected around 55 degrees Fahrenheit, with humidity at 90 percent.

Liverpool could have been seeing a very different Man U team this Sunday, had the host's midweek Champions League dance with Atalanta gone a little differently.

Underqualified and overmatched manager Ole Gunnar Solskjaer has seemingly been on the precipice of the sack for weeks now, despite the club's refusal to move on from someone not fit for the job up to this point. A loss to the relative minnows from Italy may have been enough to finally move on from their former player-turned-manager, but late goals from Harry Maguire and Cristiano Ronaldo flipped the script and led Man U to victory. Those good times won't last, however, as a title-worthy Liverpool squad come to Old Trafford.

Both on the pitch and the touchline, Liverpool exist in a different class to their rivals. The tactical mismatch between Liverpool manager Jurgen Klopp and Solskjaer is just one of many reasons Man U should move on, as the Prem's three best teams boast elite managers while Sunday's hosts tread water with a man who was relegated with Cardiff City not long ago.

Liverpool enter the weekend as the league's last remaining undefeated team, with 18 points from eight games. Led by Mohamed Salah, in untouchable form at the moment, and Sadio Mane and Roberto Firmino, both of whom are rounding back into form, the Reds have scored a league-high 22 goals (six more than second-place) and have an xG of 21.5 (4.6 higher than City in second). They once again resemble the unwavering attack that cruised to a Premier League title two seasons ago.

The Reds are stable at the back again, too, buoyed by good health for the first time in over a year. Liverpool's defensive record is fourth-best in the Premier League, with their expected goals against fourth-lowest as well.

While Liverpool are near the top of the league in attack and defense, Manchester United have had continued defensive struggles this year. In attack, where they should be best, they're still on the outside of the elite with just the fifth-most expected goals this season. Mason Greenwood has been the best attacker for Manchester United this season but he is overshadowed by their star, who is not just a headache for opponents.

Ronaldo's presence presents a conundrum for Manchester United most weeks, but even more so against teams like Liverpool that play and press with such relentless intensity. Ronaldo's unwillingness to move off the ball at this stage of the career leaves Man U undermanned across the pitch, as the other outfield players scramble to play nine against 10. It's incredibly apparent against sides worse than Liverpool, and it will be a massive issue against the Reds' high press.

Liverpool are superior to Manchester United at every area of the pitch, are far better managed, and consistently play as a cohesive team. The biggest win Man U could have this weekend would be finally finding a reason to fire Ole Gunnar Solskjaer.

Liverpool's Egyptian King is in the best form of his life and, on form, is the best player in the world at the moment. With a goal midweek against Atletico Madrid, Salah has now found the back of the net in nine consecutive games across competitions. In 11 games in all competitions this season, Salah already has 12 goals and appears set to top his stunning debut season in England, in which he scored 43 times.

Salah will have a great chance at extending his current club-record streak on Sunday at Old Trafford, having scored four times in his previous four games against the Reds' historic rivals. Operating down the right wing, Salah will be battling with Man U left-back Luke Shaw, who is considerably better going forward than he is in defense. As a team, Manchester United have been mediocre in defense, as they sit ninth in expected goals against in the Premier League.

The last time Manchester United hosted in the Premier League, Everton winger Andros Townsend found plenty of joy — and a goal — from the right side of attack. Salah will do the same and score yet again. 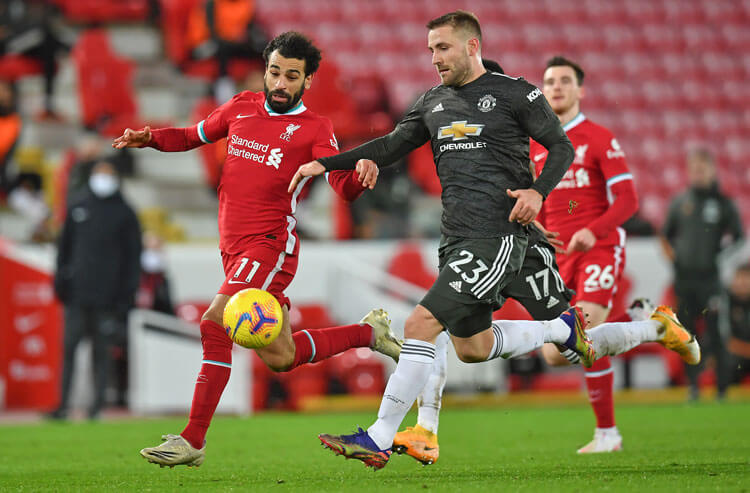 Manchester United vs Liverpool Picks and Predictions: More Nightmares at the Theater of Dreams?
Provided by