It's an uphill battle for Chelsea, who find themselves in a must-win game against league-leading Manchester City. It won't go their way. Raheem Sterling and Man City should hold enough firepower to grab another victory. For more, read our betting picks.

We’re not long into 2022 and Man City already have a 10-point lead on their Premier League rivals. Chelsea lead the chasing pack but Thomas Tuchel must already feel his chances of winning the Premier League title slipping away.

This game is already a must-win for Chelsea as a 13-point lead for Manchester City will surely be too hard to claw back. Don’t miss our Premier League betting tips and predictions for Man City vs. Chelsea.

The game will take place in temperature in the upper 30s and there’ll likely be clouds but no rain, which should provide great conditions for the match..

There feels something almost inevitable about Manchester City this season. It’s only mid-January and it’s already difficult to see the Premier League ending up anywhere but back at the Etihad this season.

Already 10 points clear of their nearest rivals, it feels like every time challengers Chelsea - or indeed Liverpool - face Manchester City, they have to take points off them or they’re out of the title race. If Pep Guardiola’s men seal victory in front of their fans early on a cold Saturday afternoon in Manchester, then it’s surely too hard for Chelsea to catch them. They’d need a historic collapse from a team that simply doesn’t falter.

Make no mistake, this is a must-win for Chelsea. Even in previous seasons, it’s been difficult to catch teams with huge leads but in a world where state-owned teams have huge squads full of incredible depth, it’s become next to impossible. Injuries won’t disrupt City’s run to the title, which means it’s essential that all the top six clubs take points off them if they’re to be reeled back in.

Manchester City and Chelsea are built on the strongest backlines and are first and third when it comes to the fewest goals conceded, sandwiched on either side of Wolves. They also happen to be the first and third highest-scoring teams too, with City again leading that category and Liverpool in the middle of the pair.

Despite all three of the clubs at the head of the Premier League only losing two games each this season, the draws have been costly for those teams chasing Man City. Chelsea have seven, Liverpool six, and Man City just the two.

Man City have been in sensational form, having not dropped a single point in the Premier League since October 30, when they suffered a shock defeat to Crystal Palace. For Chelsea, that kind of good form has been elusive. In four of their last five league games, they’ve only managed to draw, a run of dropped points that led to City gaining this nearly insurmountable lead.

One other huge issue that overshadows this game is fixture congestion. Man City come into this game after an eight-day rest and have another seven days afterward to prepare for their next match against Southampton. That’s a stark contrast to Chelsea, who have played two games since last Saturday, including a Wednesday night win over Tottenham in the Carabao Cup. Not only that, but they’ll next be in action again on Tuesday on the road against a very good Brighton team.

Chelsea have one of the league’s biggest squads but injuries to Ben Chilwell, Reece James, and Trevoh Chalobah have damaged their defense, although the returns of Thiago Silva and N’Golo Kante from Covid-19 should help improve their solidity.

Thomas Tuchel is a master of planning for one-off games and we saw a masterclass from him against Manchester City in last year’s Champions League final, but this isn’t quite the same team. Injuries and exhaustion from the busy schedule are impacting the roster while Guardiola’s incredible squad is largely fit, healthy, and refreshed.

A Man City victory isn’t a certainty, but this is a team that looks simply unstoppable in the Premier League, and Guardiola knows a win pretty much takes Chelsea out of the title race. It’s very rare that you can get City to win at odds of -154 and you have to consider it the smart play here.

These are two brilliant attacking teams and the stats suggest we should see goals. But we have to take a step back and look at what this game means to both clubs.

This isn’t just a must-win for Chelsea, it’s also a must-not-lose. They cannot afford to lose this game and Tuchel will set this team up in order to ensure that they don’t get beat and will try and score exclusively on the break. We’ve seen how well Tuchel can set his teams up against City and I’m confident this won’t be a high-scoring game.

Over the summer, we saw Raheem Sterling almost take England to its first international trophy since lifting the World Cup in 1966. He wasn't playing brilliantly for City in the season preceding that and he started this season badly after that incredible summer. It looked for some time that we may be seeing the end of Sterling’s spell at Man City, but something has changed over the last few months and we’re starting to see the electric player of old.

Since the start of November, Sterling has played 11 games, starting nine of them, and scoring eight goals with an assist to boot. He’s playing at an incredible level and has scored four goals in his past four games alone.

Sterling has become the man for the big occasion and he’s a very solid bet to score for Man City on Saturday, either first at +600 or anytime at +187. 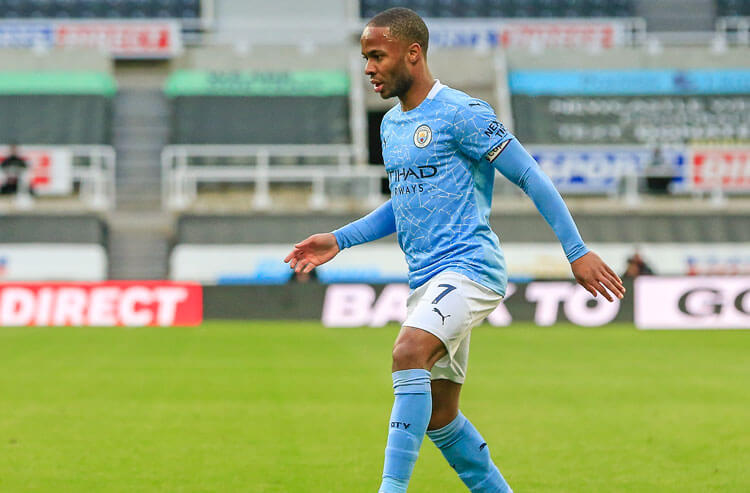 Manchester City vs Chelsea Picks and Predictions: Chelsea Foiled by Sterling & Co. in Must-Win
Provided by