Liverpool vs Brentford Picks and Predictions: Keep Up the Chase

Despite missing their two best players, Liverpool are heavy EPL betting favorites as they host Brentford on Sunday in the Premier League. Even in Salah and Mane's absence, Liverpool should take care of business, as our soccer picks highlight.

Days after a frustrating 0-0 draw in the League Cup, a shorthanded Liverpool team will return to Anfield to host Brentford in Premier League action.

Despite the squad juggling required of Liverpool, the hosts are heavy EPL betting favorites on Sunday after the two played to a draw earlier this season at Brentford Community Stadium.

Here are our free soccer picks and predictions for Liverpool vs. Brentford, with kickoff on January 16.

After a rainy morning in Liverpool, the clouds are expected to drift out leaving the teams with clear conditions for their match on Sunday. Temperatures at kickoff are expected to be around 45 degrees Fahrenheit.

These two teams played to a 3-3 draw in September in what was one of the best games of the Premier League season but it's a different set of circumstances for both ahead of this meeting.

For Brentford, that was matchweek six out of an opening seven weeks in which they took 12 points from 21 and lost just once. Since then, they've taken 11 points from 39, losing eight of their previous 13 Premier League games.

For Liverpool, that draw came amid an undefeated start that would continue into November but recent form has been less kind, with no wins since mid-December. Their squad has tightened in recent weeks too, with a COVID outbreak hitting just before Mohamed Salah, Sadio Mane, and Naby Keita left for the African Cup of Nations.

However, the difference in squad talent still must be factored in, and in that regard, Liverpool should absolutely still win on Sunday. Their backline and midfield are nearly at full strength, while even a second-choice attack should find an edge in comparison to Brentford's full-strength attack, with Diogo Jota having scored as many goals in the league as Brentford's first three choice strikers combined.

Liverpool have an average expected goal differential of +1.45 per 90 this season, while Brentford come in at -0.02. That massive gap doesn't just disappear because the Reds are shorthanded. It may have to be scrappy but with the edge in talent, and Anfield behind them, Liverpool will secure three points.

Obviously, these two teams would be incredibly hard-pressed to match their previous total in the rematch but as it currently stands, the total of 3 appears too high to go Over.

Liverpool were brutally toothless midweek against Arsenal. Despite playing up a man for over an hour, the hosts managed just a single shot on goal and created 0.9 expected goals — a figure boosted by a chance that ended with a horrible miss from Takumi Minamino. Without Salah or Mane, it's hard to see Liverpool rediscovering their cutting edge against Brentford.

Salah's numbers speak for themself but Mane is in the Top 3 in every goalscoring metric for Liverpool too, with eight goals and 10.3 xG. Combined, the pair account for 46 percent of Liverpool's goals and xG in the league this year. Their off-ball movement and playmaking are crucial to the involvement of Roberto Firmino and Diogo Jota, too.

Until Mane and Salah return, Liverpool's course to victory is through defending and taking whatever chances they do create — but they won't be in bunches as they have been for most of the year.

Brentford's attack hasn't been high-flying recently, either. Despite scoring three times over their previous two games, Brentford created just 1.3 xG combined in those matches and failed to top 1.0 xG in the two games prior.

Sunday shouldn't be any better, as Liverpool's centerback pairing of Virgil van Dijk and Joel Matip are perfectly suited to defend Brentford's striker duo of Ivan Toney and Bryan Mbeumo. Toney loves to drop deep to play the ball onto Mbeumo but van Dijk and Matip's world-class combination of physicality and pace can negate the partnership the Bees' strikers have developed.

Neither team will find goals easy to come by on Sunday and the team more likely to score is missing its two most important attackers, including the best player in the league.

Call it an overreaction but it's hard not to be seriously discouraged by the state of Liverpool's attack in Mane and Salah's absence. Their midweek League Cup game against Arsenal could have been twice as long and they may not have scored, they were so poor. Firmino's best days are behind him, Minamino's lack of quality has been apparent since he arrived in the Prem, and the early returns on Jota playing without the two phenomenal wingers were worrisome.

As mentioned, Brentford have hardly been prolific in recent weeks. Their reliance on Toney as a target man will be harmful on Sunday, with either of van Dijk or Matip more than capable of winning challenges against him. Toney is excellent in the air, ranking in the 91st percentile in aerials among forwards in Europe, but so too are van Dijk (90th percentile among CBs) and Matip (95th percentile). In the event Toney is able to win the ball in the air and flick it on for his strike partner, whichever CB stayed with Mbeumo has more than enough pace and ability to win the subsequent 1-on-1.

It's a shame, after how thrilling the previous meeting between these two was, but the Under 3 is our best bet. 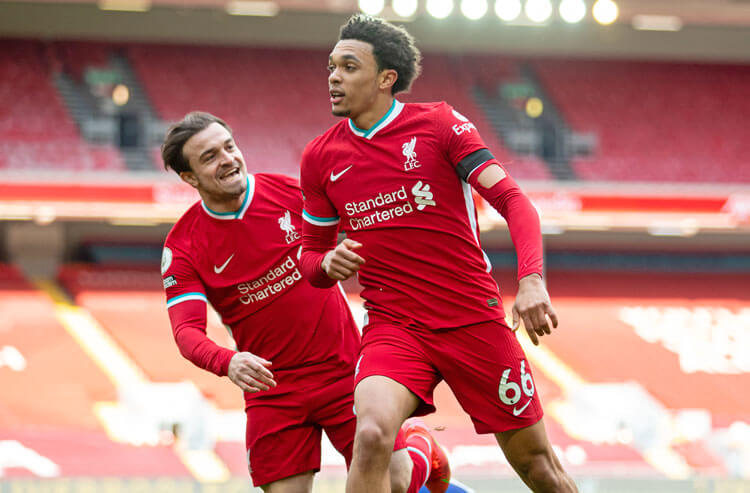 Liverpool vs Brentford Picks and Predictions: Keep Up the Chase
Provided by