The Lightning blew a great chance at advancing to the Stanley Cup Finals in Game 6, and now the pressure is on as the series returns to Tampa Bay. Can the Islanders' underdog run continue? Check out our picks and predictions.

The Bolts could be without their leading playoff scorer in Nikita Kucherov, who exited early in Game 6 and did not return. The Islanders have managed just 11 goals in the series but are just one more underdog win away from reaching the finals.

Oddsmakers have the Lightning as -170 home NHL betting favorites, with the total opening at a flat 5 for the sixth straight game.

Here are our free picks and predictions for Islanders vs. Lightning for June 25 (8:00 p.m. ET).

Late Wednesday night, Tampa Bay hit the William Hill US odds board as a -175 Game 7 favorite, then moved to -170 Thursday afternoon on the way to -165 at lunch hour today. As of 4:30 p.m. ET, the Lightning are still -165 while taking a slim majority of moneyline tickets at 52 percent, while 67 percent of moneyline dollars are on the Islanders. "We’re actually high on the Islanders, and we have one of the higher prices on them too," WillHill director of trading Nick Bogdanovich said. "So I expect this to drop even more leading up to the game. I guess bettors aren’t too worried about that 8-0 game. They’re definitely betting the 'dog in this one." William Hill US has a couple of sizable bets in play from a New Jersey customer: $27,000 on Islanders +150, to win $40,500; and a $25,000 two-leg parlay of Canadiens +125 vs. the Golden Knights – which hit Thursday night – and Islanders +150 tonight, to win $115,625. The total hasn't budged a penny off the opener of 5 (Over -130), with 60 percent of tickets/70 percent of money on the Over.

The Under is 3-1-1 in Lightning’s last five games as a favorite. Find more NHL betting trends for Islanders vs. Lightning.

Admittedly, we weren’t high on the Islanders in Game 6 despite riding them for most of the series. The offense hadn't scored more than three goals in any game of the series, and they were coming off an 8-0 blowout in Game 5. Halfway through Wednesday’s match, we looked to be skating to another winner with Tampa in control up 2-0. However, the Islanders proved doubters wrong yet again and managed to tie it up midway through the third before Anthony Beauvillier buried a boneheaded turnover by the Lightning in their own end.

The Lightning had a chance to finish the series but instead, they let the Islanders back into it as Andrei Vasilevskiy didn’t come with his best series-clinching performance. In fact, at -1.49 goals saved above expectation, it was arguably Vasilevskiy's worst game of the series.

It’s tough to back the Bolts at the steep price of -170 after they let their best chance to reach the Stanley Cup Finals slip away. Now they’re in an elimination game — something they haven’t been in across their last two playoff stretches — as a heavy favorite and could be without their leading scorer in Nikita Kucherov.

Kucherov exited Game 6 early in the first and is considered day-to-day, but he’s a giant question mark for Game 7. His absence is massive for a line that had been dominating the series and hurts center Brayden Point, who has scored in nine straight playoff games.

The Islanders didn't get a great performance from Semyon Varlamov Wednesday, as he finished with a negative goals saved above expectation for a fifth straight game. However, despite the mediocre play in net by New York, they have managed to find ways to win against a superior opponent. Whether that’s on coach Barry Trotz or the team, what New York has proven is that they are a goldmine when the books give them little chance to win.

New York has won 11 games in these playoffs, with all of them coming as an underdog. They have five wins of +130 or better and at +145 ahead of Friday’s series finale, we think the price is right. It won’t be an easy win for the Islanders, who have won by exactly one goal in all three victories versus Tampa, but getting +145 in a Game 7 in the semifinals seems like a gift after they were +475 to win the series heading into Game 6.

Tampa has done a great job at locking down the New York offense, which has just 11 goals through six games. Conversely, in their wins, the Islanders have kept the Bolts off the scoreboard as they are averaging just 1.67 goals per game in defeats.

Losing Kucherov is also a big hit to the Over. The Russian forward is leading the playoff with 27 points in 17 games but will not be at 100 percent even if he does suit up on Friday. He had nine points across six games versus the Islanders, who didn’t have many answers for his line. The total opened at 5 with the Under at +110, which is the same price as Wednesday with Kucherov in the lineup. If you liked the Under in Game 6, then Friday’s total has you hitting the Under button even harder.

Vasilevskiy should answer with a better performance on Friday after being instrumental in the New York comeback in Game 6, allowing a softy backhander from the hash marks to put the Islanders on the board 2-1. Vas leads the playoffs in shutouts, is tied for the best save percentage with Carey Price at .933 and leads all playoff tenders in GSAX/60. If Tampa does win this one, it will likely be from another spectacular performance from the former Vezina winner.

The Islanders have just 11 goals in 164 total shots, which equates to a paltry 6.70 shooting percentage. The power play is just 1 for 16 in the series while the PK has been stellar outside of the 8-0 loss. We are looking at this Game 7 total in just one way: the plus-money Under.

Did you know that if you parlayed today’s NHL Islanders vs. Lightning picks, you could win $41.45 on a $10 bet? 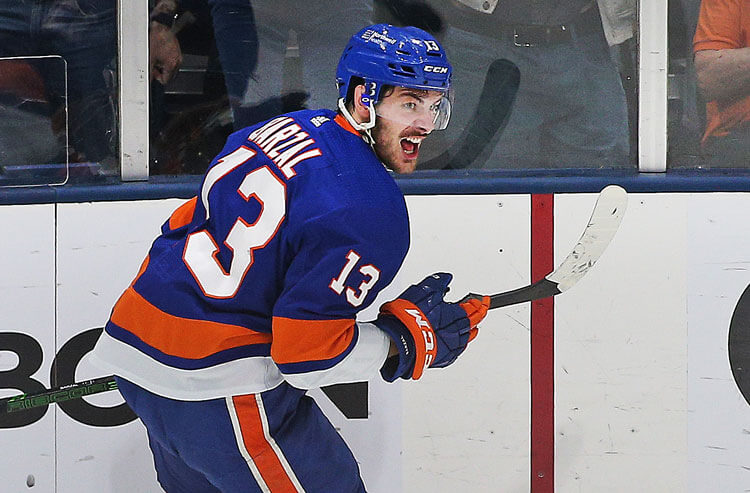