The Vegas Golden Knights are on a three-game losing streak, but they have a good chance to get back in the win column Monday night against a Blues squad that has dropped six straight.

The Vegas Golden Knights and St. Louis Blues will try to snap out of losing streaks as they face off in NHL action on Monday night.

The Knights are still third on the Stanley Cup futures board and oddsmakers expect them to get the win tonight, with NHL betting lines installing Vegas as a -140 road favorite.

Here are our best free NHL picks and predictions for the Golden Knights vs. Blues on April 5, with the puck dropping at 8 p.m. ET.

The Blues are 4-18 in their last 22 home games. Find more NHL betting trends for Golden Knights vs. Blues.

Vegas has dropped three games in a row, most recently a 2-1 defeat to the Wild on Saturday. The Knights are still eighth in the league in point percentage and second in the West Division with a 24-10-2 record.

The Blues have gone through a rockier season, ranking 20th in the league in point percentage and posting a 16-15-6 record. They are currently on a six-game losing streak, getting outscored 19-7 over that stretch.

The Knights have struggled to put the puck in the net recently but have plenty of talented forwards and are fourth in the league in goals for per 60 minutes at 5v5 (2.71). They are also fifth in the league in Fenwick For rating, which indicates that they usually control puck possession and generate more scoring chances than their opponents.

St. Louis is 23rd in the league in GF/60 at 5v5, while ranking 22nd in FF%. The Blues are also far worse in terms of goal prevention, allowing 3.14 goals per game, compared to the Knights who are second in the league with just 2.28.

When you look at the entire season, the Knights mini-slump seems like an outlier while the Blues losing streak is more indicative of their overall poor play. And St. Louis bettors might be feeling a bit like Happy Gilmore yelling "are you too good for your home??" with the Blues going just 4-18 in their last 22 games at the Enterprise Center.

With Vegas going 6-1 in the last seven meetings between these teams, don't hesitate to pay the juice with the road faves in this spot.

Regardless of who gets the start between the pipes for Vegas tonight, they'll be tough to beat. Marc-Andre Fleury picked up the loss on Saturday but was solid in nets and is 17-9 with a 2.14 goals-against average and a save percentage of .924 this season. Robin Lehner is the other option and stopped 35 of 37 shots in his last start last Thursday. He has a 2.29 GAA with a .912 SV%.

Blues netminder Jordan Binnington isn't having his best season but he's still reliable and is coming off a strong performance in a loss against the Avalanche, turning aside 36 of 39 shots. The Blues will need another great performance from him if their ugly offensive play can't get on track.

The Blues are averaging just 1.6 goals per game over their last 10 contests and have hit the Under in five straight. The Knights haven't been much better lately, potting just five goals over their previous three games.

Both sides also rank among the Bottom-10 teams in the league on the power play so even getting the man-advantage might not be much help. With the Under going 15-7-1 in the Golden Knights last 23 games on the road, back the Under again. 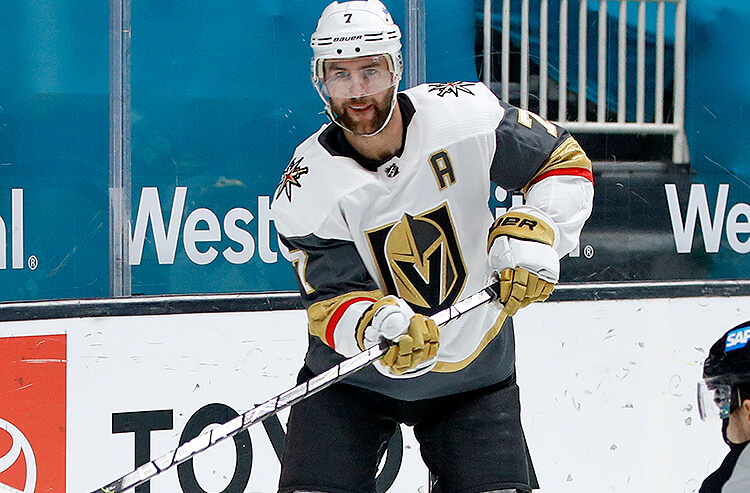 Golden Knights vs Avalanche Picks and Predictions: Which West Powerhouse Snaps Out of It?
Josh Inglis | Oct 26, 2021