While the moneyline price on Colorado is steep, we still think it's not enough given how thoroughly it can dominate in the first round. We're backing Nate Mac to keep piling it on in a road win with our Avalanche vs. Predators picks. 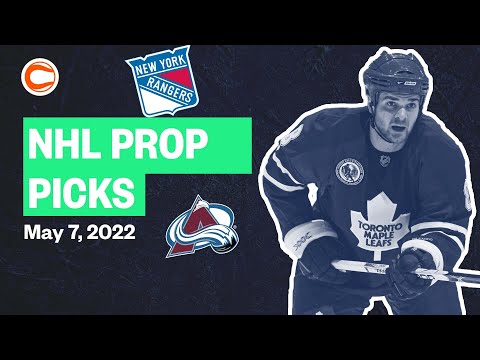 The Colorado Avalanche take a 2-0 series lead into Nashville this afternoon, but the Predators showed more fight in Game 2 thanks to the play of rookie goalie Conner Ingram who made 48 saves in the 2-1 OT loss Thursday night. Ingram will get the nod again with Juuse Saros still unavailable.

Can the Preds ride their third-string netminder to victory Saturday afternoon in what will be a rocking Bridgestone Arena? Can the Avs look more like their Game 1-selves in a matchup they come in as -235 road favorites? Find out in free NHL picks and predictions for Avalanche vs. Predators.

The Avalanche opened as -195 road favorites and have moved slightly to -200 with a total opened at 6.5 that's leaning to the Over. The Avs closed as -400 favorites in Game 2 and -300 in Game 1 with 6.5 totals. A 200-point difference between games and changing locations is certainly something to note.

Avalanche vs Predators head-to-head record since 2018-19

The Avalanche are 10-1 SU in their last 11 Conference Quarterfinals games. Find more NHL betting trends for Avalanche vs. Predators.

Avalanche vs Predators picks and predictions

In Game 1, the Avalanche won the contest within the first 15 minutes after scoring five goals on David Rittich and getting him pulled. However, rookie Connor Ingram has stepped in and made life a little more difficult for the West’s best, stopping 79 of the 83 shots he’s seen. Colorado needed overtime to win in Game 2 but they still dominated the match. Can Ingram stand on his head and get the Preds back into the series?

Ingram was making just his fourth NHL start on Thursday as the 25-year-old former third-round pick has spent most of his professional career in the AHL, where he has put together a very solid resume. He finished Game 2 with a +2.37 goals saved above expected, per Money Puck, but asking him to pull off another performance like that is a lot.

The Avalanche finished Game 2 with more expected goals than in their 7-2 win in the opener. The power play missed some golden opportunities and finished 0-for-4 while Colorado had a staggering 53 quality scoring chances compared to Nashville's 19 — good for a 73.6 SC%. Ingram has to play at an elite level just to keep his team in the game.

The Nashville offense is another giant question mark. It's managed just three goals over the series’ first two games, isn't generating much sustained pressure at 5-on-5, and has just 54 unblocked shots while the Avs had 54 in Game 2 alone at even strength.

The Predators’ top line of Forsberg-Granland-Duchene also spent a lot of time defending in Game 2, as the line allowed 28 shot attempts against compared to 14 attempts for. With the Avs rolling two solid top lines (Gabriel Landeskog has rejoined Nathan MacKinnon and Mikko Rantanen), a skilled third line of Burokovsky-Compher-Aube-Kubel and a fourth line that has some pop, speed and skill, it’s hard for Nashville to match up, even with the last change.

Landeskog back up with Nate Mac and Rantanen.
MacKinnon is currently +140 to score this afternoon. pic.twitter.com/qpV0PUyWeL

Roman Josi has also been kept in check by Jared Bednar and Avs. The Norris candidate has just a single assist through two games and is being outplayed on the other end by likely Norris winner Cale Makar, who has turned things up a notch in the playoffs. Makar is currently +1,000 in Conn Smythe odds, behind only Nathan MacKinnon (+800), who has also put things into high gear with three goals and an assist in the series.

The Avs have the advantage up front, have the best six defenders of all 16 teams in the playoffs, and have been getting consistent goaltending with Darcy Kuemper, who has a positive goals saved above expected in the series.

The only way Nashville wins is if Ingram stops 40-plus shots, and we saw in Game 2 that even when he plays lights out, the Avs can still grab the victory.

With Colorado closing north of -400 in Game 2 and being priced as -200 road favorites tonight, a 200-point price difference is just too big for us to overlook — even in a tough barn to play in. The Avs have dominated the first round of the playoffs in seasons past and come into today 10-1 SU in their last 11 first-round matchups. We’d be willing to go two units to win one unit at -200.

Through two games, we’ve seen 12 total goals with nine of those coming in Game 1 and 12.43 expected goals. Rittich was the reason Game 1 hit the Over, as the Avs had more scoring chances in Game 2 than they did in the opener.

Ingram looked calm and collected against one of the best home teams in hockey on Thursday and having the Nashville fans backing him tonight should help him stay motivated — even if he does have a seemingly hand-drawn goalie mask.

The Colorado power play is the real dealbreaker here for the total. They had their way with the Preds in the opener, going 2-for-5 but failed to beat Ingram with the man advantage in four opportunities. The power play looked dialed in, it just didn’t finish.

With the way Makar and MacKinnon are playing right now, we could see Colorado hang six goals here themselves if Ingram falters. Herein lies the predicament with this Over: betting the Under is trusting a goalie with four NHL starts to his name vs. one of the best offenses in hockey.

Defensively, though, the Avs are the final piece of the puzzle that has us looking at the Under. When your blueline consists of Makar, Devon Toews, Bowen Bryam and Josh Manson, you are set for a dominating run in the postseason. Colorado finished with the fifth-best xgoals against at 5-on-5 in the regular season and didn’t have Byram and Manson for the majority of it. The Avalanche also had the fourth-best PK over the season’s final two months.

Nashville has just produced 51 shots on net in over six periods of action and finished outside the Top 15 in goals for at even strength during the regular season. Colorado has suffocated the No. 8 seed at 5-on-5 and if we don’t expect two-way scoring, we aren’t getting on the Over 6.5.

If you’re really savvy, you might wait for this total to hit 7 as some books are at -135 to the Over on 6.5 as of this morning.

Nathan MacKinnon has been flying through two games of this series. He has three goals and an assist, which has pushed his point total to 44 points in his last 27 playoff games with 26 of those coming in the first round, including 12 goals (11 games).

He has 14 shots in two games and has been reunited with linemate Gabriel Landeskog. He is skating faster than anyone on the ice right now and looks determined to get his team deep into the playoffs this season. He led all skaters in xgoals in Game 2 and looks like a skater who can’t be contained right now.

If bet365 is going to give us a +140 anytime goal for the forward, we’re contemplating multi units here. Auston Matthews has been priced at even money and that’s where we think Nate Mac should be priced (maybe +115).

Everyone is looking to get the puck on his stick because he has turned his game to a different level and he wants one thing right now and that’s to win. Expect him to get a ton of chances today and with penalties up substantially, he’ll get his cracks on that elite power play as well. He has scored the opening goal in each of the two games this series.

Did you know that if you parlayed today’s NHL Avalanche vs. Predators picks, you could win $46.25 on a $10 bet? 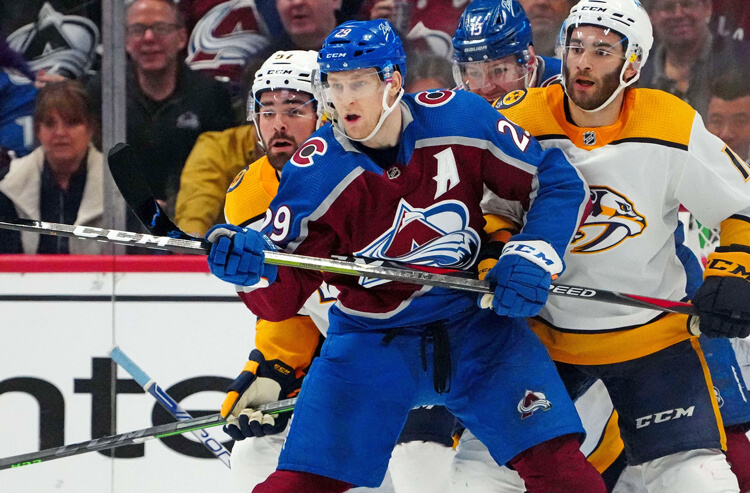