Sometimes one bet just isn't enough of a sweat. Luckily, the Parlay Queen, Monique Vag, is here with her weekly NFL parlay picks, giving you the best bets to double down on for Wild Card Round action.

NFL Wild Card weekend is here and with that comes three days of football action, with 12 teams squaring off from Saturday across Monday.

With only one double-digit spread - Kansas City Chiefs (-13) hosting the Pittsburgh Steelers, and four of the six games with spreads under a touchdown, we look to be in for a competitive Wild Card weekend.

Here's a closer look at my two favorite NFL parlay picks across all three days of games.

The Las Vegas Raiders travel to Cincinnati to take on the Bengals hoping to avenge their Week 11 head-to-head loss, where the Bengals won 32-13. A huge fourth quarter was the difference-maker in a game that ended pretty similar in terms of yardage. Costly penalties and lack of efficiency on third down for the Raiders, going 1-for-7, was the difference-maker in that fourth quarter in what was a close game up until that point.

Following that defeat, the Raiders secured their playoff loss in Week 18 by upsetting the Los Angeles Chargers in overtime, while we saw the Bengals rest most of their starters preparing for this upcoming matchup. Expect the Raiders to find success through their newly invigorated running game, and their defense to continue to do what they do best - bring pressure. At the very least, I think they keep it close.

The Eagles find themselves back in the postseason for the fourth time in five years. This time around, the team looks much different led by second-year quarterback Jalen Hurts and rookie head coach Nick Sirianni. They have looked much better defensively after being the weakest spot of their team against both the run and the pass. Offensively, similarly to the Raiders, this is a team who jump-started their run game going from a team extremely pass-heavy early on to the number one rushing team in the league averaging 159.7 yards per game.

Hurts and the running game will get going in the first half before the Tampa Bay Buccaneers and Tom Brady take over in the second half. Although historically they haven't been great earlier on in games, Week 18 saw this team put up 17 in the first half. With not a lot of pressure to perform already surpassing expectations, I think they play loose and find the end zone a few times early on.

The Dallas Cowboys and San Francisco 49ers find themselves in one of the more intriguing Wild Card matchups with two very evenly matched teams. The 49ers are fortunate to enter the postseason after their early-season struggles. They ended the season very strong having won seven of their last nine contests. The Cowboys, on the other hand, haven't put forth a quality win in quite some time.

In a game that could come down to field position and looks to be a back and forth affair, I like looking into field goal props. Both teams have kickers with legs capable of connecting on those long attempts. On field goals of 40-49 yards, Robbie Gould went 7-of-9, and 50+ 3-of 4. Although PATs haven't come easy for Greg Zuerlein this year, in terms of field goals he too went 7-of-9 from 40-49 yards, and 2-of-5 from 50 or more.

Monday night's matchup marks the third time this year the Los Angeles Rams and Arizona Cardinals meet up, with this one as the rubber match with both squads splitting their regular season matchups. As hot of a start the Cardinals got out to earlier in the year, they are limping into the postseason literally and figuratively having one only one of their last five games and have two notable injuries to monitor, with Deandre Hopkins and JJ Watt.

As for the Rams, they are in a great spot to find offensive success on the ground. The Cards surrendered 202 rushing yards in their Week 18 matchup. They rank 20th in rushing yards allowed at 114.8, and a high 4.6 yards per attempt. With Sony Michel continuing his late-season success and now getting Cam Akers back, the Rams will likely lean on the rushing game more heavily. As for Michel in particular, he has gone over his rushing total in five of his last six games and I expect much of the same on Monday night. 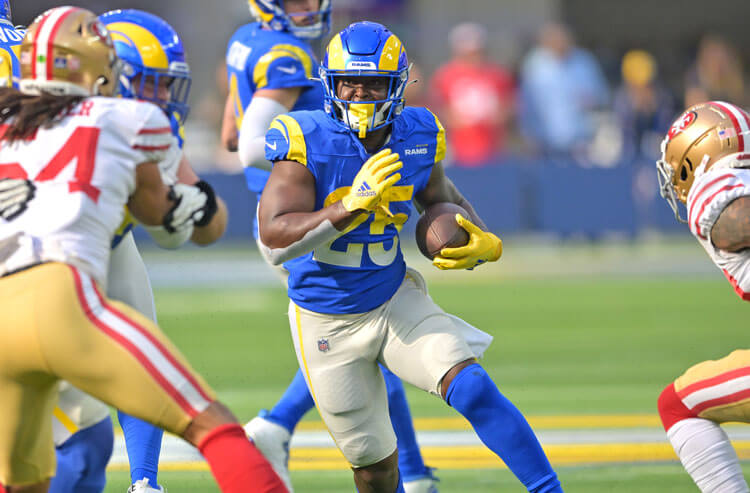