We're looking at the best Week 4 bets to make — before Week 3 action has even started — and we have our sights set on the Packers and Chargers as potential Week 4 values.

My colleague Jason Logan has a column called "Bet Now, Bet Later," which partially illustrates the value in betting NFL odds sooner rather than later, as lines move throughout the week (and with it any betting edge).

Yes, there is a "Bet Later" part, which preaches patience, but we're not concerned about that here — we're just going to focus on the "now" part... only to the extreme.

While Jason's BN/BL examines the potential odds movements within a certain week, I'm actually looking a week ahead and examining the look-ahead lines for any numbers that we think will not exist come Sunday night, when the official opening odds are posted.

For example, before Week 2 started, the Falcons were posted at +3.5 on the look-ahead line at Seattle for Week 3. Fast forward to last Sunday and the official opening line saw Atlanta +2.5, and now: books are showing a pick'em... or even Atlanta -1.

Now, the Falcons may not end up not covering this weekend, but a 4.5-point edge is a pretty big value, and getting value is half the battle. So with that in mind, let's explore the current look-ahead NFL Week 4 odds for what we think are exploitable betting opportunities.

The Chargers opened the season with the third-shortest Super Bowl odds, were a Top-10 team in Adam Chernoff's preseason rankings, and are 2-0 ATS after fending off a much-hyped Raiders team in Week 1 and covering (despite losing) against the vaunted Kansas City Chiefs at Arrowhead in Week 2.

The Texans look like one of the worst teams in the league, as expected — so why are the Chargers only laying a touchdown right now?

Herbie suffered fractured rib cartilage in the second half of that Week 2 loss against the Chiefs, but still managed to finish the game — and deliver one of the best throws of the young season — despite being in obvious pain.

The third-year pro is still considered questionable for Week 3 against Jacksonville, having yet to fully practice this week, but despite head coach Brandon Staley being coy with his comments on his star's status, the Jaguars are expecting him to suit up and Bridget Condon of NFL Network said he looked like he was ready to play.

A source in the building tells me Justin Herbert was throwing yesterday and looked like his normal self. #Chargers #BoltUp @nflnetwork pic.twitter.com/UMNtpvle4O

If Herbert goes out and looks great this Sunday (and does not suffer any further injury), this line is going to move. Heck, even if he doesn't play, the fact that he's this close to playing — and will have had about 17 days of rest — should have him a lock to play in Houston... and this line will likely move.

The Texans so far are 2-0 ATS, but they've been outgained 867-533 through two games (against an underwhelming Colts team and a Broncos side with the most dysfunctional head coach in football right now).

Houston closed as a 7-point home dog in Week 1 against Indy, a team that going into the season was not as highly regarded as the Chargers were, and blew a 20-3 fourth-quarter lead in that game. They were also spotted more than a touchdown at home seven times last year — including games against Sam Darnold, Mac Jones, Carson Wentz, Ryan Tannehill... and laying 13.5 against these same Chargers in Week 16.

The SuperBook had this preseason number at 8.5 points. As long as Herbert doesn't further wreck himself in Week 3, this line will move off the widely available key number of -7 — if you believe in the Bolts (and Herbert's health) bet it while you can.

Both of these teams looked awful in Week 1, then rebounded in Week 2 against very mediocre opponents, but the bottom line is Aaron Rodgers is laying less than a touchdown at home against Mac Jones.

Green Bay has closed as 7+ point chalk in six of its last 10 home games (the exceptions are a playoff game against San Fran and matchups with Matthew Stafford, Ben Roethlisberger, and Russell Wilson), going 9-1 SU in those games and winning by double-digits eight times.

That includes closing -13.5 last week against the Chicago Bears — who are similar to New England with a run-heavy offense and a not overly threatening passing attack — and winning by 17.

The Pats, meanwhile, have not been particularly impressive on the road in Jones' year-plus in Foxboro, where the sophomore is 7-4 in away games... but:

Bettors are still liking Green Bay, with the Pack's line for a Week 3 visit to Tampa Bay moving from +3 to +1, and some Bucs injuries/suspensions give plenty of reason to like Rodgers & Co. to pull off the road win — only further building the GB love.

New England is a home dog to Lamar Jackson (fifth in EPA/play in 2022) and the Ravens, who will be looking for revenge after a bad Week 2 collapse, and an ugly defeat could steer more bettors towards the Pack.

FanDuel and some other books are offering Packers -6.5 right now, which is totally fine, but there's also some -6 lines out there — there's a strong possibility this finishes on the other side of -7 (and possibly move towards double digits) so I'm jumping on Green Bay -6 while it still is available. 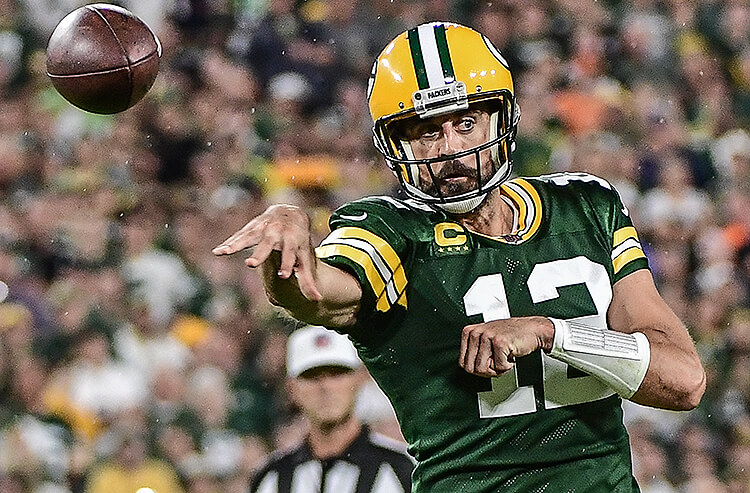