We're looking at the best Week 14 bets to make — before Week 13 action has finished — and we've got our eyes on divisional rivals playing yet another grueling, low-scoring contest.

Nothing screams "low scoring" like an old-fashioned Ravens vs. Steelers divisional showdown — especially in 2022, when both offenses are particularly awful.

The look-ahead Week 14 odds for this AFC North grudge match is already a low total, but I feel like this could drop even more come kickoff.

Yes, the NFL odds are very much subject to change, with Week 13 not having yet kicked off, but that should actually work in our favor.

Read on why if you like this game to go Under... the best line available will be 10 days in advance.

Baltimore Ravens at Pittsburgh Steelers Under 41

What was that I was saying about bad offenses?

The Pittsburgh Steelers are currently 27th in overall offense Expected Points Added, 28th in both total yards and points per game, and 29th in passing offense EPA.

Now, to be fair, the offense is in the midst of its best offensive stretch of the year, scoring 20+ points in three straight games (26.7 per game average), but — and there's always a but — the Saints, Bengals, and Colts aren't the true bitter rivals that the Baltimore Ravens are.

Four of the last five matchups have seen fewer than 40 total points scored (with offenses that were better than this year's versions), while three of those totals closed at 41.5 or lower.

Also working in favor of another game without much scoring is that the Ravens' passing attack has been downright dreadful, averaging just 177.6 passing yards per game since Week 3, with just 11 TDs against six interceptions.

The running attack has still been among the league's best, sitting second in yards per game and third in EPA — but the one thing the Steelers do well is stop the run, allowing just 104 yards per game this year (sixth-lowest in the league) and permitting just 67 yards per game in the three contests since T.J. Watt returned to the lineup.

Week 13 action should also not influence much Over action, as I don't expect the Ravens to score a ton against a stout Broncos defense (nor give up much vs. their pathetic offense), while the Steelers have seen their total drop this week against the Falcons — who are much worse defensively than Baltimore — to 42.5... not much more than this Week 14 line.

Between what I anticipated to be two lower-scoring Week 13 games, bettors jumping on the lore of Ravens-Steelers, and just the overall realization these offenses kinda stink... I'm expecting this total to eventually flirt with the 30s.

If you want to bet the Under, I'd do it now.

Sportsbooks you can bet Ravens/Steelers Under 41 right now: 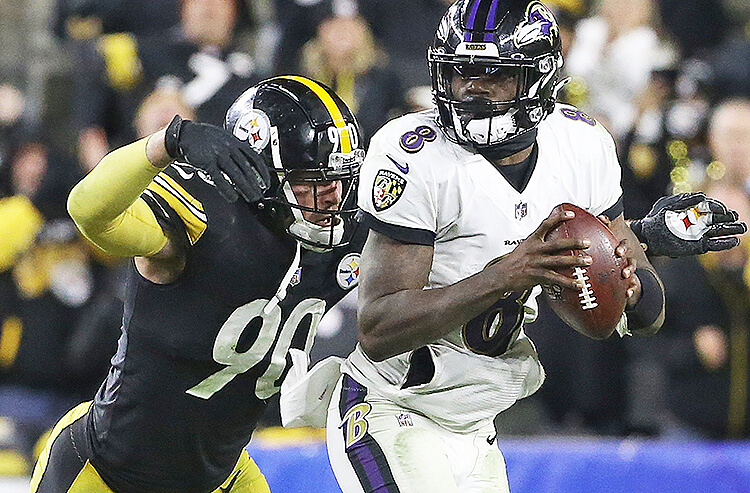