Odell Beckham Jr. was expected to return Sunday, but surprisingly was on the inactive list and ruled out for Week 1. Get the latest NFL Week 1 info with Covers' NFL cheat sheet, featuring injuries, weather, Covers consensus, and key betting news.

The long wait is nearly over, as NFL Week 1 odds are on the board, and kickoff on Sunday is less than 24 hours away. Several betting factors remain up in the air, including the status of Odell Beckham Jr., while others are decided — with new Colts QB Carson Wentz ready to debut.

This week's NFL Cheat Sheet will give you all the information you need for Sunday, as Covers checks in on NFL Week 1 injuries, weather, consensus picks, and more.

New York Giants: Jason Garrett's cast of characters on offense entered the week in doubt, as Saquon Barkley, Kadarius Toney, Kenny Golladay, Kyle Rudolph, and Evan Engram all began with uncertain statuses. However, Barkley and Engram are the only two remaining on the injury report, with Engram ruled out and Barkley expected to play. Despite New York's good news on the injury front, the spread has grown by half a point over the week, with the G-Men now 3-point underdogs against the Broncos, while the total has shrunk half a point to 41.5, with money coming on the Over.

Cleveland: Odell Beckham Jr.'s return from a torn ACL, which ended his 2020 campaign, will have to wait one more week as the star WR surprisingly was on the inactive list. Since midweek, the Browns have shifted from 6.5-point underdogs to 5-point dogs, while the total has grown to 54.5 from 53.5, with money coming on the Over.

Indianapolis: The Wentz Wagon will roll into Lucas Oil Stadium on Sunday with no limitations, as new Colts passer Carson Wentz is ready to go for Sunday after August foot surgery. Indy will be down a few key pieces, however, as left tackle Eric Fisher, cornerback Xavier Rhodes, and pass rusher Kemoko Turay are all ruled out. Despite the Colts' good injury news under center, they moved from 2.5-point home underdogs to 3-point dogs, while the total sits at a flat 48 after getting as high as 50 midweek.

Los Angeles Chargers: NFL Network's Ian Rapoport said Friday Austin Ekeler was expected to play in Week 1, after sitting out during the week with a hamstring injury. The typically snakebitten Chargers should enter the year fully loaded on offense around sophomore quarterback Justin Herbert. The spread vs. the Washington Football Team has gone from Chargers -1, to a pick'em, to L.A. +1, where it sits on Saturday, throughout the week. The total has remained steady at 44.5.

Denver: Things haven't gotten more clear on the injury front for Bradley Chubb as Sunday draws closer, with Chubb listed as questionable and called a game-time decision by head coach Vic Fangio. Chubb's questionable but Denver will get Von Miller back in the lineup, as well as Courtland Sutton. Noah Fant, limited to start the week, is without an injury designation as well.

New England: New Patriots receiver Nelson Agholor sounds like he is truly questionable ahead of Sunday after he was limited in practice throughout the week with an ankle injury. Agholor's designation has done little to move the needle as New England's moved to 3-point favorites from 2.5 midweek, with money still coming in on New England. The total dropped to 43.5 this week with money coming in on the Under.

Chicago: The Bears are facing a lot of question marks ahead of Sunday Night Football in Los Angeles, with pass rushers Khalil Mack and Robert Quinn, speedster wideout Darnell Mooney, and free safety Eddie Jackson all questionable. The spread has remained Rams -7.5 throughout the week, while action on the Over has seen the total grow from 45 on Monday to 46.5.

Baltimore: An absolutely brutal week in Baltimore saw the Ravens lose tailback Gus Edwards, in line to start after JK Dobbins' season-ending injury, for the year, as well as playmaking cornerback Marcus Peters. Those injuries hardly moved the betting needle, with the Ravens going from 4.5-point favorites in the blackhole in Vegas to 4-point favorites, while the total slipped down to 50 from 51 to start the week.

Steelers vs. Bills: There's rain expected overnight in Orchard Park, where the ascending Bills will host long-time AFC gatekeepers the Pittsburgh Steelers. Buffalo is always a safe bet for inclement weather but it looks like that will be avoided in Week 1, with the conditions expected to be just overcast as there is less than a 10 percent chance of rain throughout the game.

Browns vs. Chiefs: Weather will be key in Kansas City, where the Chiefs and Browns are looking at the lofty total of 54.5 ahead of Sunday. That early September weather will be friendly, however, with temperatures expected around 90 degrees Fahrenheit throughout the game and minimal wind coming from the southwest.

Other news and notes

It comes as no surprise, but Texans QB Deshaun Watson has been officially ruled out for Week 1 after he was held out of practice this week with a non-injury designation. Journeyman backup Tyrod Taylor will get the start Sunday and for the foreseeable future, with no resolution in sight for Watson.

Texans officially ruled out QB Deshaun Watson for Sunday’s opener vs Jacksonville. He was listed on injury report as “not injury related.” 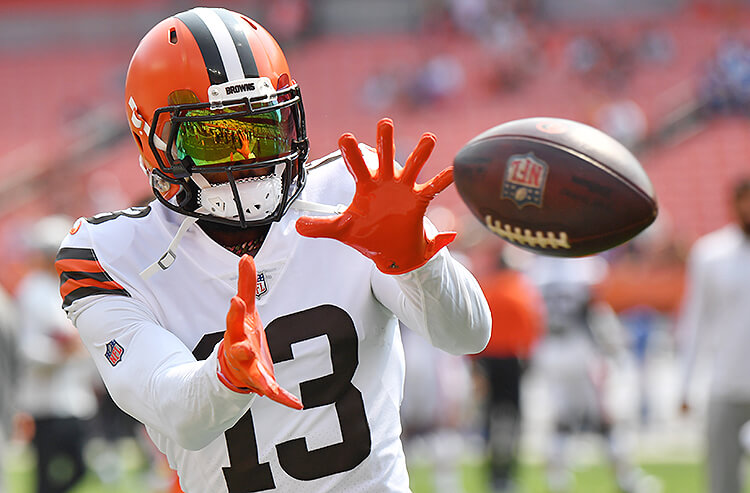