The NFL postseason is drawing to a close with a Chiefs-Eagles Super Bowl set for Feb. 12. Download our printable, fillable NFL playoff bracket and make your selections for this year's Super Bowl.

Super Bowl 57 is set for two week's time as the Kanas City Chiefs and Philadelphia Eagles prepare to meet in Arizona on Feb. 12, and that's where our NFL Playoff bracket comes in.

The teams are set for Super Bowl LVII. Download, fill, and even print this bracket for the 2023 NFL Playoffs. 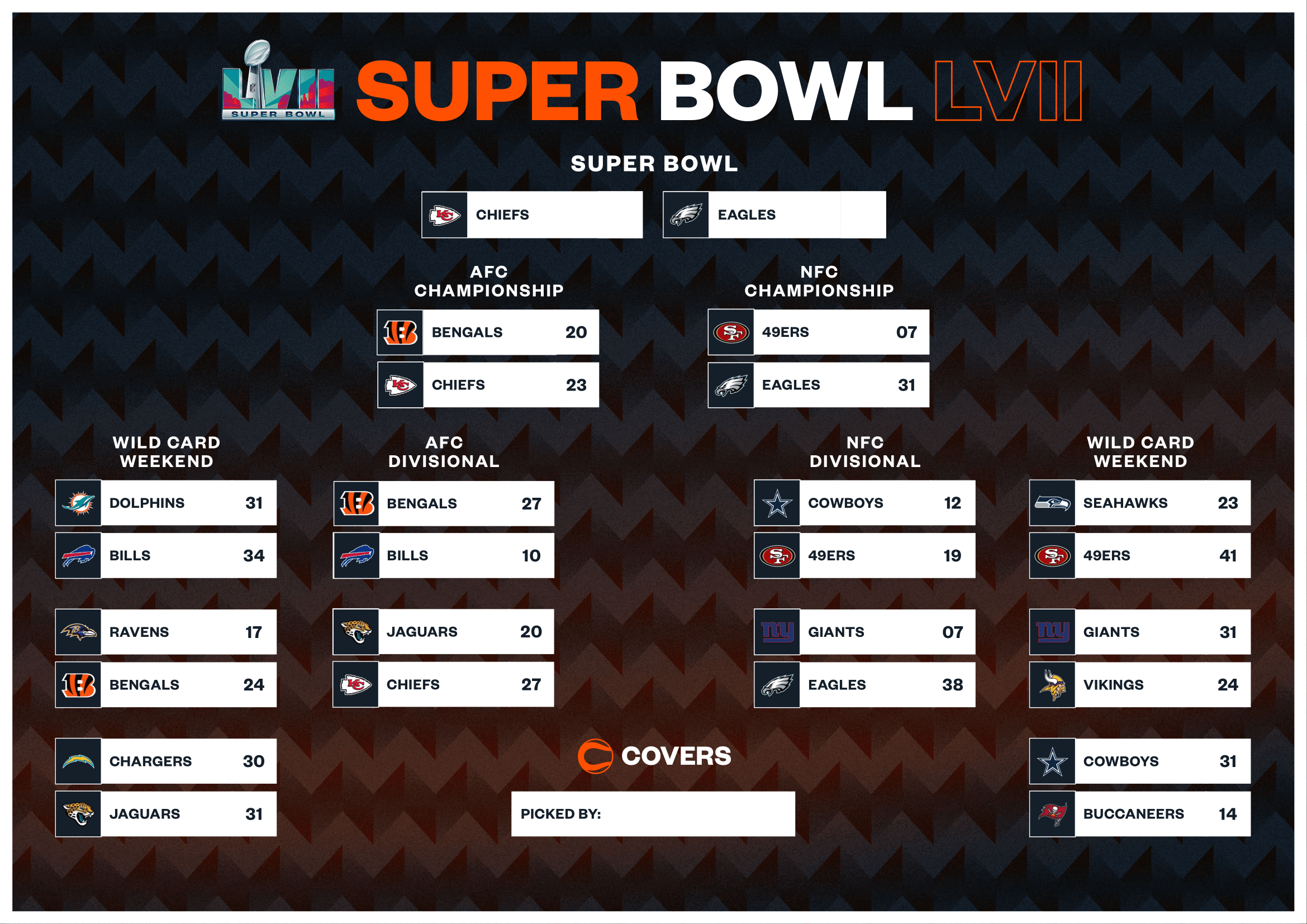 Odds to win the Super Bowl

See which teams have the best Super Bowl odds before filling out your bracket.

Three members of Covers' roster of NFL betting experts have filled out a bracket ahead of the Wild Card Weekend, see their brackets below and don't forget to look for their NFL picks before every game.

Covers' veteran NFL analyst Jason Logan let fandom fuel his 2023 bracket picks, and he has his Dallas Cowboys riding through the rough and timber NFC to beat the Kansas City Chiefs at Super Bowl LVII. Over in the AFC, the championship is a rematch of 2022, with the Chiefs getting the better of Joe Burrow and the Cincinnati Bengals this year. Make sure to read all of Jason Logan's expert betting insights as he analyzes the odds, and line movement and makes picks for the whole NFL postseason 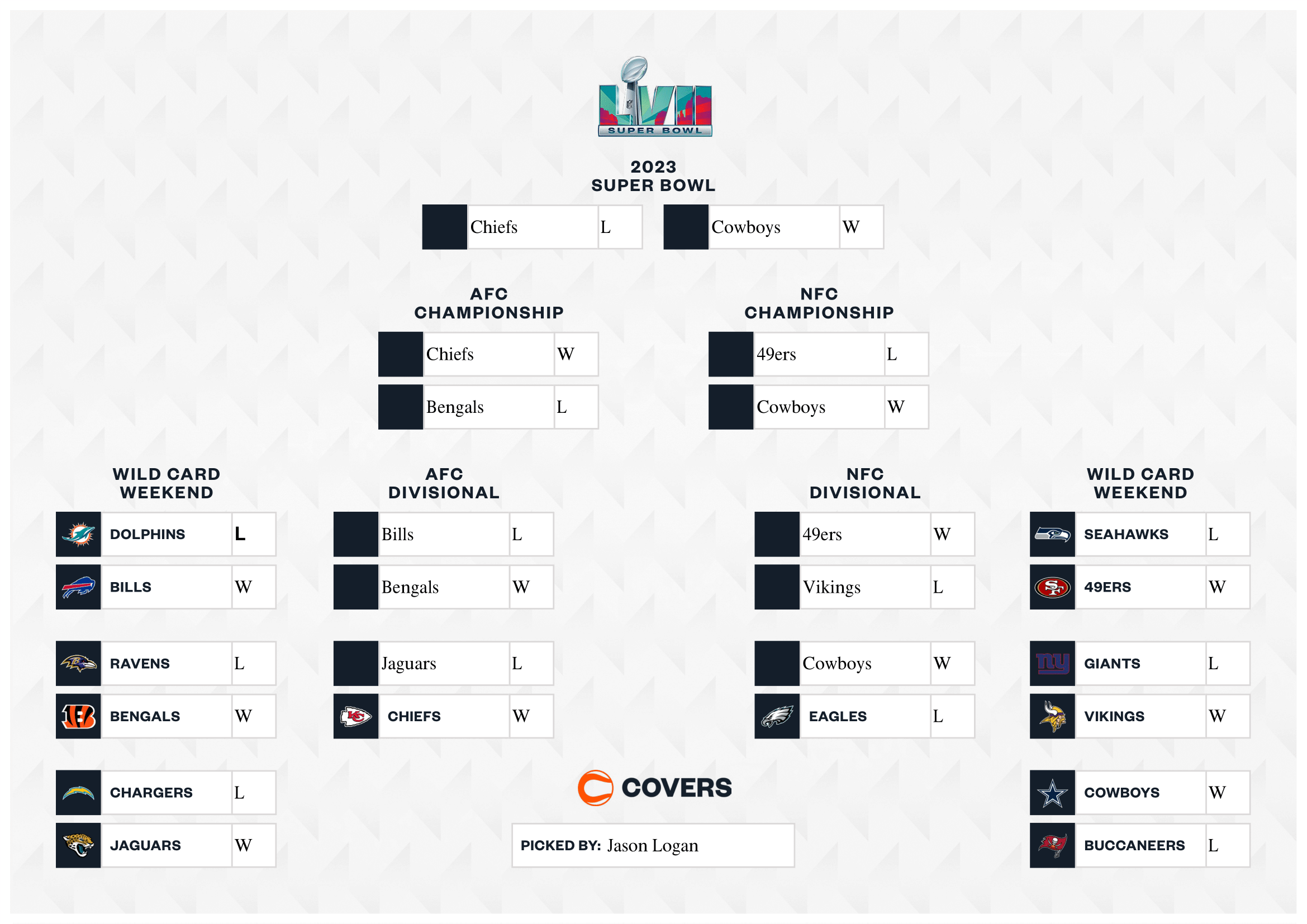 Covers' betting analyst Rohit Ponnaiya is backing the season-long favorite Buffalo Bills to win Super Bowl LVII after beating the Kansas City Chiefs in the AFC Championship. He's also picking the Dallas Cowboys to be their opponent. To do this, Ponnaiya sees Dallas besting the Tampa Bay Buccaneers, the Philadelphia Eagles, and the San Francisco 49ers to make it the Big Game. Make sure to keep up with all of Rohit Ponnaiya's betting picks during this NFL postseason stretch. 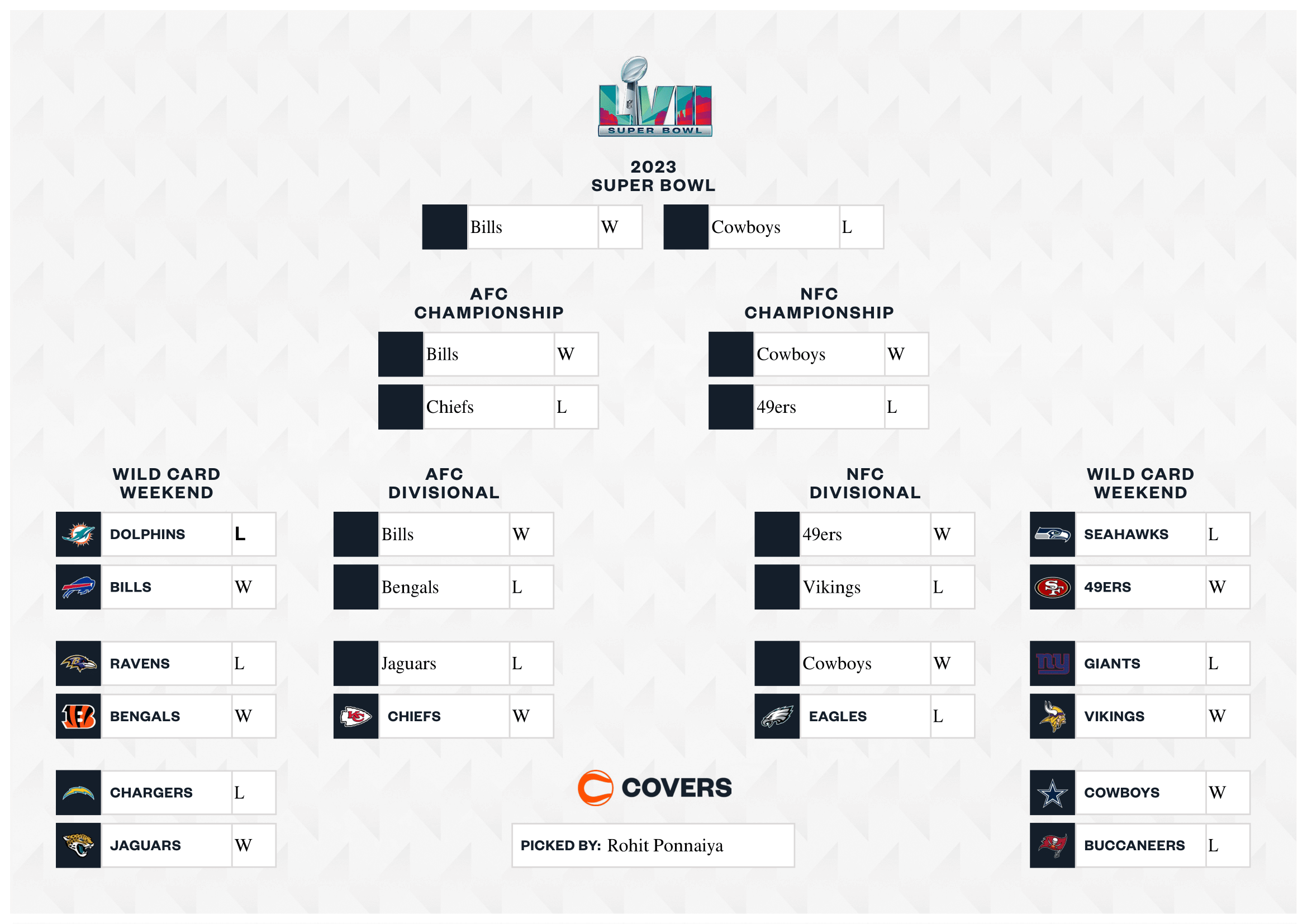 Josh Inglis' bracket: Big cats are at top of the food chain in the AFC

Covers analyst Josh Inglis charted an aggressive bracket on the AFC side that sees the Jacksonville Jaguars beating the Kansas City Chiefs before falling to the Cincinnati Bengals. In the NFC, Inglis has the 49ers over the Seahawks, Cowboys, and Eagles on their way to being crowned Super Champions next month. Make sure to follow along with all of Josh Inglis' expert betting picks during the NFL Playoffs. 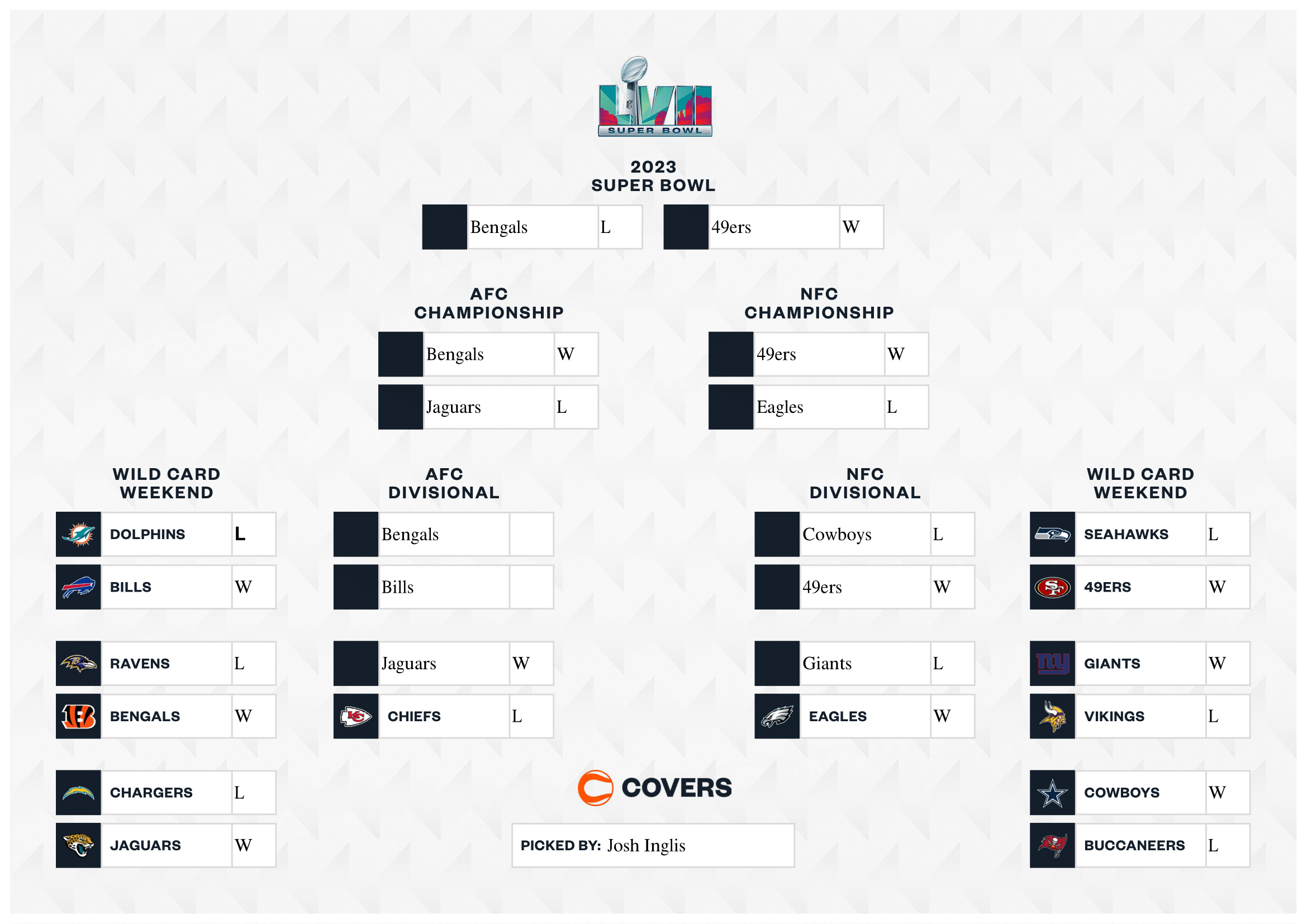 How the NFL playoff bracket works

Since 2020, the NFL playoffs have functioned with the following rules:

In the event of a tied record, seeds are assigned as follows:

If the above criteria don't break a tie, a coin toss is used.

If you're planning to bet on the 2023 NFL Playoffs, you need to make sure you're using a sportsbook that's trusted and giving you the best odds. We've assembled a list of all the best football betting sites so you don't have to. 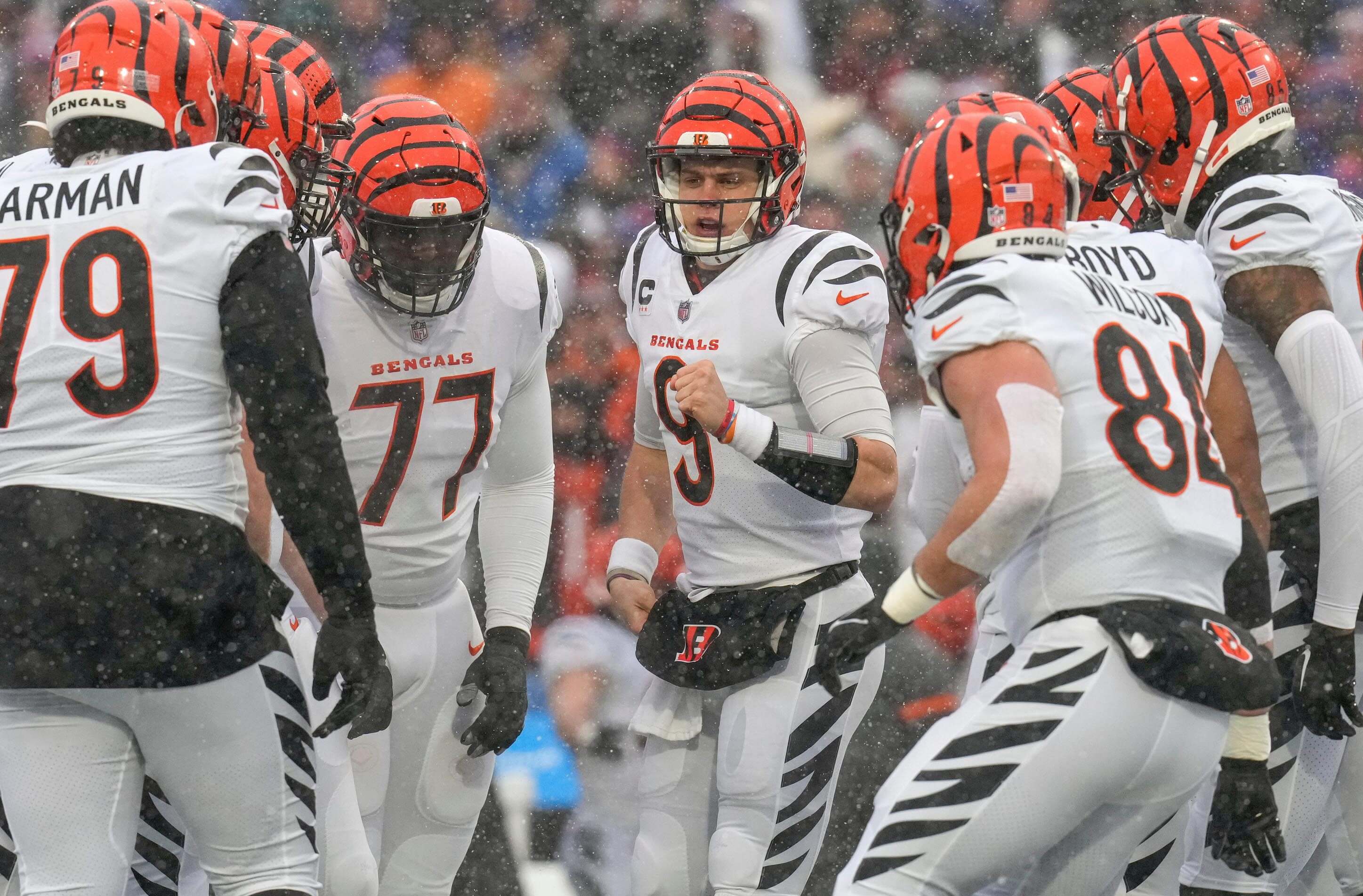