The Vikings' wins have been less-than-impressive outside of an outlying Week 1 triumph. With Chicago able to gash their shaky run defence, we're predicting the Bears to pounce on a bloated spread with Week 5's Underdogs picks. 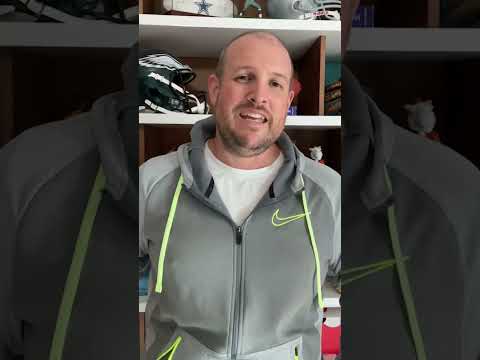 The first four weeks of the 2022 NFL season have been tighter than my waistband after a turkey dinner. And with Canadian Thanksgiving going down this weekend and NFL odds spreads shrinking by the game, football bettors could be popping the top button just to breathe on Sunday.

Over the past 22 seasons, there has been an average of 24.9 spreads of a field goal or shorter in the first four weeks, including 24 spreads of three or less between Week 1 and Week 4 in 2021.

The current standings paint a picture of parity, with 14 teams sitting 2-2 SU and only eight teams boasting a winning record this fall. We’ve also had 47 of 64 total games played be decided by one score (eight points or less).

We usually have a clearer view of which teams are contenders and which ones are pretenders by Week 5. But as it stands, many of us are still untangling the drum-tight rats' nest that's been the 2022 season so far.

NFL picks against the spread for Week 5

The Bengals are absolutely one of those teams that folks have mixed emotions about. But after a rough start to the season, Cincy seems to be righting the ship with wins the past two weeks.

Beating up on the Joe Flacco-led Jets and letdown Dolphins (minus Tua midway through 2Q) last Thursday may not move the needle with everyone, but as this offense gets untracked, the Bengals are quickly becoming one of the better two-way teams in the NFL.

The Bengals have enjoyed a mini bye since beating Miami last Thursday, giving them extra time to prep for the always-daunting task of slowing down Lamar Jackson.

Defensive coordinator Lou Anarumo has Cincy set up well, considering the Bengals boast a run stop rated No. 7 in DVOA at Football Outsiders and have also checked opposing passers to a completion rate of less than 57% — third-lowest in the league.

The Bengals are keeping opponents guessing, especially with the blitz. Anarumo hasn’t dialed up extra pass rushers much (blitz rate of 17.2%) but when he does — look out. According to TruMedia, the Bengals have the highest success rate at creating pressure when blitzing after four weeks of football.

Cincinnati has done well to contain Jackson in previous meetings, most recently a 41-17 win last October in which he was sacked five times and completed only 15 of 31 passes (yet still amassed 345 total yards of offense, because… it’s Lamar).

As for the Ravens defense, well, can they be trusted?

Baltimore has barfed up big leads in both losses, somehow got into a shootout with the Patriots, and was outgained by the Jets in Week 1. Second halves have been hell for Baltimore backers, with the team sitting No. 5 in 1H Defensive DVOA and No. 26 in the final 30 minutes.

The Bengals attack is on the uptick with the new-look offensive line coming together after a rough start to the season. Running back Joe Mixon rounded up his blockers to help work out the kinks with the ground game this week, with the Bengals ranked second-last in EPA per handoff.

An improvement with the run should help Cincy further control possession and tempo versus a Ravens run stop sitting 22nd in DVOA. The Bengals are the second-best TOP team in the league at an average of 33:48. That’s another way Cincinnati can slow down Jackson: don’t let him on the field.

This spread opened Bengals +3.5 and has ticked down to +3 at most shops, however, there are some half-point hooks still available for a price as of this writing.

You could point to injuries as to why the Chargers are sitting 2-2 SU entering this road trip to Cleveland. And while those missing pieces have played a role, there are still glaring weaknesses with this L.A. team — most notably the defense.

The Bolts sit 28th in EPA per handoff allowed, have budged for 5.4 yards per carry, and now stand up against the best rushing attack in the NFL. Cleveland continues to come at you with RBs Nick Chubb and Kareem Hunt, ranking a decisive No. 1 in EPA per handoff.

Kevin Stefanski is methodical in his attack, running one of the slower paces in the league and eating up clock like Stove Top Stuffing — dominating possession to the tune of 35:38 per game. But it’s not just a constant push for short gains. Cleveland has 25 runs of 10 or more yards through four weeks and L.A. has been gashed by big gains on the ground, giving up a 50-plus-yard run in each of the past three contests.

That physical approach could break a road-weary Bolts team that’s not only playing its second straight road game, but its third away game in four weeks. Los Angeles seems on the tipping point already, sitting 30th in points allowed per play (0.489) over the past three outings.

Limiting the Chargers' touches and taking advantage of that weak L.A. defense could force Joe Lombardi’s playbook to be one-dimensional if the Bolts fall behind. The Browns look like they’ll have top pass rusher DE Myles Garrett back in action for Week 5 and potentially CB Greedy Williams, bolstering a secondary allowing the second lowest completion percentage in the land (56.91%).

The Vikings have ridden the coat tails of a Week 1 win over Green Bay for four weeks now. Enough is enough.

After beating what we now know isn’t an on-par Packers team, Minnesota has gone on to get squashed by the Eagles, pull off two comebacks to sneak past the Lions, and avoided a loss in London thanks to the Saints’ double-doinking a would-be game-tying FG off the woodwork.

As bad as the Bears have looked, the Vikes have no right laying more than a touchdown to anyone.

Take the Green Bay game out of the mix, and Minnesota’s much-ballyhooed offense under new head coach Kevin O’Connell has been downright flat (ranked 19th in EPA per play from Week 2 to Week 4), ranking out worse than the likes of Carolina in points per play in the past three games.

The defense is even more disappointing. The Vikings have been bullied over the last three outings, plunked down at 27th in EPA allowed per play since Week 2. They allowed 25 points to a Saints squad missing its three top offensive weapons, while getting pushed around for 111 yards on the ground — and they knew the run was coming!

Chicago is a tough pill to swallow, even with a silky +7.5 points coating the outside. But the Bears are grinding out gains on the ground (11th in Run DVOA) and have shown fight against stronger opponents, beating San Francisco in the slop in Week 1 and putting a scare in Green Bay in Week 2.

Quarterback Justin Fields has been under fire a lot to start the season, facing the second-highest amount of pressure per dropback against elite pass rushes like Green Bay and San Francisco, as well as blitz-heavy attacks like the Giants.

However, this Week 5 matchup in Minnesota should feel like a completely different pocket, given that the Vikings own the sixth-lowest blitz rate and are generating pressure on only 19.5% of their opponents' dropbacks.

Fields is a mess when under pressure, completing only 23.8% of passes for an average of just 5.8 yards per attempt. Give him a clean pocket, however, and the Bears’ second-year QB is connecting on 63% of throws and picking up 7.6 yards per attempt.

He’s also a threat to break off big gains with his legs. Minnesota was torched by dual-threat QB Jalen Hurts in Week 2, with Philly’s mobile QB rushing for 57 yards and two touchdowns. In his one game against the Vikes in 2021, Fields had a solid showing: completing 26 of 39 for 285 yards passing, one touchdown, and 35 yards on the ground. 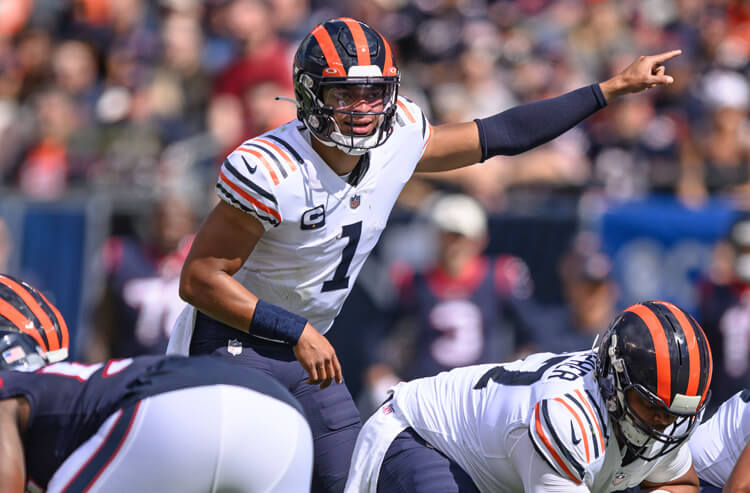