NFL betting fans are treated to the Green Bay Packers and Minnesota Vikings kicking off their NFC North rivalry in Week 1 of the 2020 NFL season on Sunday. Both teams are candidates for regression after going a combined 23-9 SU last season.

The Vikings opened as -3.5-point favorites back in May, but that has slid down to -2.5 but could jump back up to -3 closer to the weekend. The total opened at 46.5 but has slid all the way down to 45 at some books and could approach the key number of 44 closer to kick off.

Here are our NFL free picks and predictions for Packers vs. Vikings on September 13. **video

Sunday’s game will be played indoors. Be sure to monitor all gametime conditions with our NFL weather info.

The Under is a perfect 9-0 in the Packers’ last nine games versus the NFC North. Find more NFL betting trends for Packers vs. Vikings.

The Packers went 6-0 against their division last year, went 8-1 SU in one-possession games and didn’t lose any games due to injuries to their starting offensive line. These things are almost impossible to repeat in 2020 and a big reason why their season win total of nine has been hit hard on the Under. This is a team that is lacking skilled players at the wide receiver position, after not addressing the glaring hole in this year’s draft, and is a run-first team.

Even if Green Bay can’t match 2019’s win total, they are still very much in contention to win this division and took care of Minnesota twice last year, with the Vikings scoring just 26 points in both those games combined.

Vikings’ QB Kirk Cousins is coming off his best year in the league but enters the 2020 season without his 2019 offensive coordinator and best receiver. Kevin Stefanski has taken his offensive mind to the Cleveland Browns, while the field-stretching Stefon Diggs has moved on to Buffalo. The Vikings scored over 26 points a game last year, but without their OC and deep-threat WR, they will find it difficult to match those numbers, especially against a Green Bay pass defense that finished with the ninth-best DVOA mark in 2019.

Another big factor that helps push the needle in Green Bay’s favor is the fact that the Vikings replaced all three of their 2019 starting cornerbacks. With such a modified warm-up before Week 1 and a reportedly difficult defense to comprehend quickly, the Minny secondary could be susceptible to play-action if Green Bay starts successfully running the ball. We like +2.5, but may wait and see if we can get it at +3 closer to kickoff.

Neither game hit the Over in 2019 as both QBs couldn’t top 230 yards and they combined to throw four touchdowns and four interceptions. Each team found success on the ground last season, as Minnesota’s Dalvin Cook went for 150-plus yards on the ground against Green Bay's 27th-rank DVOA rush defense in the first meeting and Green Bay’s Aaron Jones rushed for 154 yards and a pair of TDs in the final meeting (while Cook was out).

Sunday’s game plan for both teams could be a heavy dose of running, as it plays into both teams’ offensive strengths. Minnesota had a middle-of-the-pack run defense last year and they lost defensive linemen Everson Griffen and Linval Joseph. Minnesota had the fourth-most rushes per game last year and will likely give Green Bay another 28-32 rushes on Sunday. With such a lack of talent on both teams at the receiver position, we like both teams to play to their strengths — and to the weaknesses of their opponents — and run the ball. We are getting on the Under before it falls to the key number of 44.

Minnesota's star RB, Dalvin Cook, managed only one game against Green Bay’s porous run defense last year due to injury, but the fourth-year runner made it count: He totaled 191 total yards on 23 total touches and one TD. Cook amassed five TDs in his first four games in 2019 and averaged 101.8 rush yards in games where he rushed more than 15 times.

Green Bay got shredded on the ground last year and gave up an average of 129 yards per game, which was the fifth-highest mark in the NFL. Cook had five 100-plus rushing games in Minnesota’s first seven games last year and Green Bay will likely see a heavy dose of Cook and the run game on Sunday. 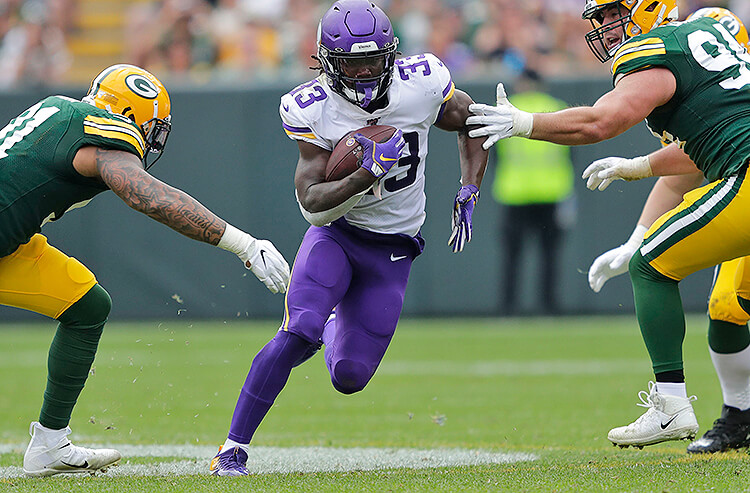 Packers vs Vikings Week 1 picks and predictions
Provided by