NFL Week 1 odds are often tricky under normal circumstances, never mind those under which we now find ourselves, coming back from a pandemic. Several factors contribute to how and why games are being bet, some of which tend to get overlooked.

So every week, this NFL Cheat Sheet will serve as one-stop shopping for all that information. Covers checks in on NFL Week 1 injuries, weather, consensus picks, Pros vs Joes and more. Check back throughout the week for NFL injury updates, popular picks and where there’s a notable contrast between sharp bets and public money.

Denver Broncos: Normally, it takes an injury to a starting quarterback, or at least a superstar running back or wide receiver, to move a line 2.5 points. Bettors found out Tuesday night that Broncos stud linebacker Von Miller is worth that much, too. Miller suffered an apparent freak injury to an ankle tendon at the end of Tuesday's practice, and it's possible he's out for the season. Said Eric Osterman, oddsmaker and manager at The SuperBook at Westgate: "We moved the Week 1 line from pick to Titans -2.5." And that's after the line had already moved from Broncos -3 to pick, with much of that shift occuring in the past week, for the second game in a Monday night doubleheader. On Saturday, Broncos star wideout Courtland Sutton (shoulder) was listed as questionable, and The SuperBook moved to -3.

Chicago Bears: Star linebacker Khalil Mack is questionable for Week 1 with a knee issue, as is running back David Montgomery and versatile wideout Cordarrelle Patterson. New defensive end Robert Quinn is doubtful after missing practice with an ankle injury. Chicago moved from +3 to +2.5 Friday night with money on the Bears, but this line could come back to a field goal by Sunday.

Detroit Lions: Detroit could be low on receiving targets, with WR Danny Amendola (questionable) and Kenny Golladay (doubtful) nursing injuries. The total for the Week 1 opener versus Chicago opened at 44.5 in the spring and is down to 42.5 entering the weekend.

Philadelphia Eagles: Oddsmakers are closely watching running back Miles Sanders (hamstring) and right tackle Lane Johnson (lower-body injury), among others. Sanders is now probable to play, but Johnson remains questionable. "The Eagles seem to be a little banged up, which has moved the line a little bit in that game. We are at Eagles -5.5 right now, down from the opening number of -6," said Eric Osterman, manager and oddsmaker at The SuperBook at Westgate.

Los Angeles Chargers: Cluster injuries can have a big impact on the outcome, and L.A. could miss two veteran linemen for Week 1, with center Mike Pouncey (questionable) and tackle Bryan Bulaga (doubtful) on the injury report versus Cincinnati. Receiver Mike Williams is a game-time decision due to a shoulder injury. The Chargers are 3-point road favorites Sunday.

Cincinnati Bengals: Wideout A.J. Green (hamstring) is expected to be fully cleared to play Sunday vs. the Chargers. There was no impact on the line, which remained Bengals +3.5 at The SuperBook. However, the Bengals defense will be without tackle Geno Atkins and safety Shawn Williams.

Tampa Bay Buccaneers: Standout receiver Mike Evans has been upgraded to active after being listed as doubtful with a hamstring injury for Tampa Bay's trip to New Orleans in Week 1. The Bucs have a new-look offense with QB Tom Brady under center. Tampa Bay is a 3.5-point underdog versus the Saints on Sunday, and while Evans is a dangerous deep threat, his worth to the spread is not as great as past seasons due to the additional weapons on the Buccaneers' depth chart and the diminished arm strength of Brady.

Dallas Cowboys: Dallas on Monday put right tackle La’el Collins (hip) and linebacker Sean Lee (sports hernia) on injured reserve, meaning those two are out the next three weeks minimum. However, there was no impact on the line at The SuperBook, with the Cowboys still 3-point road favorites against the Rams.

Cleveland Browns: Center JC Tretter, who had minor surgery for a knee issue in mid-August, returned to practice Monday. The Browns actually closed in a bit Monday, from +8 to +7.5 at The SuperBook for Sunday’s road game against the Ravens.

San Francisco 49ers: The defending NFC champs could be thin at wide receiver, with Deebo Samuel out for Week 1 and rookie target Brandon Aiyuk listed as questionable with a tender hamstring. Another player to keep an eye on is running back Tevin Coleman, who sat out practice on Friday due to health concerns around the poor air quality in the Bay Area. The Niners are giving a touchdown to the visiting Cardinals on Sunday.

Find the latest injury news for every game with our NFL Injury Report.

New York Jets at Buffalo Bills: Rain is expected throughout Sunday morning in Buffalo, with a chance of showers and winds up to 20 mph in the afternoon, which could play a role in this 1 p.m. ET start. However, oddsmakers already projected this game to be a less-than-exhilarating offensive display, witht the total at 39.5 points, the lowest of all Week 1 games.

Indianapolis Colts  at Jacksonville Jaguars: Scattered showers and thunderstorms are predicted, with a 60 percent chance of rain and winds up to 15 mph during the day. Kickoff is at 1 p.m. ET. But there’s been no impact on the total, stuck at 45 at The SuperBook.

Las Vegas Raiders at Carolina Panthers: Early in the week, rain was predicted for Sunday's 1 p.m. ET kickoff, and the total dipped from 47.5 to 46.5 on Monday at The SuperBook. However, Saturday's forecast shows just a 10 percent chance of precipitation, and the total rebounded to 48.

Los Angeles Chargers at Cincinnati Bengals: The forecast in Cincy calls for mostly cloudy conditions and scattered thunderstorms in the morning, but this matchup doesn’t kick off until 4:05 p.m. ET. Still, the total dropped from 44 to 41.5 at The SuperBook.

Get all the gametime conditions with our NFL Weather Report.

Here are the top Covers Consensus picks for Week 1:

Get our complete NFL picks consensus for Week 1 matchups.

Pittsburgh Steelers at New York Giants: UPDATE 1:15 P.M. ET MONDAY: Scott Shelton of BetMGM Nevada said sharp play arrived over the weekend on the Giants +6, leading to a move to +5.5. But with the public backing the Steelers, the line went back to Pittsburgh -6 Monday morning. ... PointsBet USA's Patrick Eichner said the total in this game is pitting the sharps against the squares, though surprisingly it's not in the fashion you'd think. "Sharps are on the Over, and the public is on the Under." The total opened 48.5 and is down to 46.

Tampa Bay Buccaneers at New Orleans Saints: "The Bucs and Saints is definitely one," Osterman said of sharp vs. public play at The SuperBook. "The line is holding steady at Saints -3.5, even though we are getting a ton of parlay money on the Bucs," Osterman said, noting sharp play on New Orleans.

Green Bay Packers at Minnesota Vikings: "The Vikings recently moved to -3 (even) from -2.5, even though we are taking some good public money on the Packers," Osterman said, pointing to sharp money on Minnesota. 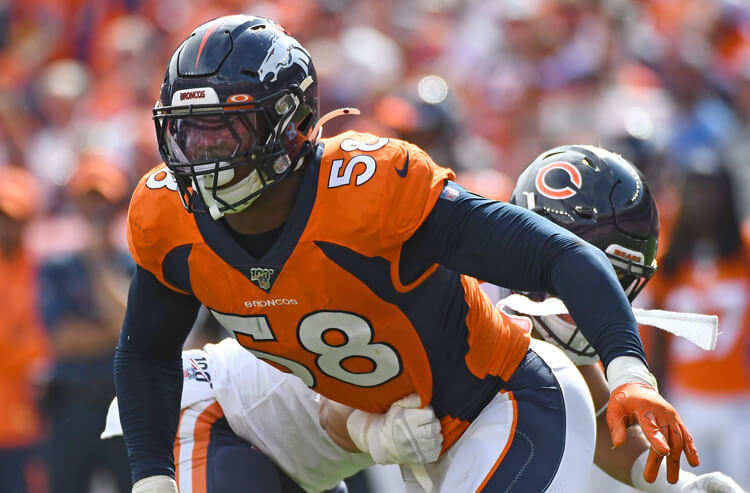