The finalists have been announced and as we await the outcome of the NFL Coach of the Year odds, Philadelphia Eagles head coach Nick Sirianni is penned as the favorite. Get the latest update on the award race below.

As we approach Conference Championship weekend, the five head coaches who closed the regular season atop the odds board have been named as finalists.

With the winner to be announced on February 9 in Phoenix, here are the latest NFL odds to win the 2022-23 Coach of the Year award.

(Editor's Note: This article has been updated to reflect the announcement of the finalists. The market is currently OTB, odds below are accurate as of January 4, and subject to change.)

NFL Coach of the Year odds

Looking to bet on some NFL futures? Here are two of the best bonuses* available:

*Eligible USA locations only. Also, check out our full list of NFL promo codes for 2023.

01/04/2023: Sirianni remains the odds leader, although Kyle Shanahan has vaulted into the second at +200. The 49ers are the hottest team in football, winners of their last nine games. Meanwhile, Super Bowl-winning head coach Doug Pederson finds himself now at +1,000 following the Jaguars' late surge for a playoff spot. Jacksonville is currently 8-8 under Pederson, a massive step up from last year's disastrous 3-14 campaign in 2021.

12/13/2022: Sirianni's Eagles are now 12-1, coming off a blowout win over Brian Daboll's Giants in the Meadowlands. The biggest move over the week sees Lions' head coach Dan Campbell now in second on the odds board following Detroit's home win over Minnesota. Following a 1-6 start to the season in which Campbell's job was becoming jeopardized, the second-year head coach is now a legitimate contender for COY as Detroit hopes to make the playoffs for the first time since 2016.

11/29/2022: Sirianni and the Eagles are coming off a dominating home win over Green Bay to secure their 10th win of the season. At the same time, Mike McDaniel is now tied for second with Kevin O'Connell at +500, as the Dolphins are winners of their last five. Meanwhile, Brian Daboll's odds have slightly dipped after a loss to Dallas on Thanksgiving. Robert Saleh's Jets bounced back in a big way in Week 12, with a 31-10 win over the Bears as they currently maintain a Wild Card spot in the AFC at 7-4.

11/15/2022: Despite a minor hiccup in which the Eagles were upset at home by Washington on MNF, Sirianni is still the favorite to win Coach of the Year as Philly has a favorable matchup to immediately bounce back against the Colts. Meanwhile, Kevin O'Connell is narrowing the gap behind Brian Daboll for the second, as the rookie HC is now at +360 following Minnesota's incredible comeback win in Buffalo over the weekend.

NFL Coach of the Year trends

NFL Coach of the Year history

A quick look at the NFL COY winners since 2000.

The last time the Coach of the Year winner also won the Super Bowl in the same season was all the way back in 2003, when Bill Belichick's New England Patriots finished the regular season 14-2 and successfully defeated the Carolina Panthers for the Lombardi Trophy. 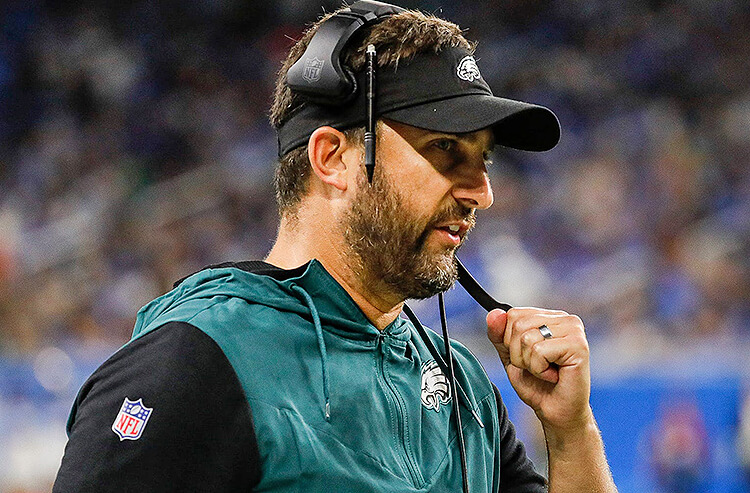