Circa Million Week 10 Picks: Counting on Chiefs to Return to Form

Covers enters one of the top sports betting contests in the world with Adam Chernoff delivering his Week 10 picks for the Circa Million Football Contest.

Covers is throwing an entry into the Circa Million Pro Football contest for the 2021 season and Adam Chernoff has been tabbed to make the weekly picks so let's dig right in.

Here are his five ATS picks for Week 10 of the Circa Million betting contest.

I bet on the Browns to beat the Bengals last week because I have the Browns rated higher and believed the matchup on-field supported it. The handicap this week is much of the same. My power ratings make the game Cleveland -1.5 and getting 2.5 presents more than enough value to make the bet. In the contest perspective, New England is likely to be the more picked side leaving potential to gain ground. The Patriots’ wins this season have been against Zach Wilson twice, Davis Mills, Sam Darnold, and Justin Herbert. All of them are in their first two seasons or Darnold, who the Pats know well. It is a much more experienced and sophisticated offense this week with Stefanski and Mayfield. This is also the biggest step up in class for Mac Jones and opposing pass rushes faced.

Teams have switched to playing a two-deep safety shell against the Buffalo Bills, and their offense has sputtered. They mustered just 26 points against Miami in a game that was tied late in the fourth quarter and then just six points in a loss to Jacksonville. Josh Allen has struggled with his accuracy on short throws and the lack of any ground game for Buffalo does not give it a consistent answer to take what opposing defenses give it. Until the Bills figure this out, covering these big numbers are going to be a challenge.

Although the Tennessee Titans looked impressive in their victory against the L.A. Rams on Sunday Night Football, their offense was anything but. Collectively, the team put up just 192 yards against the Rams’ defense and now step up in class against the Saints, potentially without Julio Jones, who was a DNP on Friday after being downgraded. Without Derrick Henry, the Titans are not going to be able to run on the Saints’ defensive front, and if limited to just AJ Brown in the receiving game, the explosive plays the Saints are prone to giving up may be limited. Tennessee is likely to be the most picked side of the week, so I am going to swerve taking a number likely to be better than the market too.

Where is this love for Denver coming from in the betting market? Just two weeks ago it struggled to score against Washington, after four consecutive losses. This team still has a ton of issues in its defensive front seven, which is problematic against the Eagles who rank best in the league for rushing efficiency and run rate the last three weeks after an offensive shift. With injuries in its secondary, Denver becomes more suspect to play-action - something the Eagles have also found a ton of success with the last three weeks. The upset win against Dallas was great, but to have that valued as anything more than a one-off result is taking it too far in my opinion. This price is putting the Broncos and Chargers on equal footing as the Chargers closed -1.5 on the road at PHI and now the Broncos are -3 at home. This is too much for Denver to cover.

Last season this matchup was Kansas City -7.5 and -11. In the last ten days, the Chiefs were -10 to the Giants while the Raiders were just -2.5. To get to Kansas City -2.5 now means bettors in the market are putting far too much of a value on playing at home in Las Vegas, or, they are saying what Kansas City did against New York and Green Bay is a projection of things to come. I think it is more of the latter than the former combined with in-season trending numbers suggesting the Raiders are the better team, but I am not putting as much value into either. I continue to have the Chiefs rated higher than the Raiders and seeing this matchup in another world below the field goal is just too much of an adjustment. I believe this is the week where we see the Chiefs of old in a comfortable victory.

Before making your football contest picks, you'll want to watch the Covers Football Contest Countdown. Adam Chernoff brings on noted contest player Las Vegas Cris and they walk through the weekly odds — right after Circa releases their lines — with the goal of predicting the top consensus plays of the week. The show streams live on Thursdays at 1 p.m. ET / 10 a.m. PT each Thursday on YouTube and Twitter and is available on-demand at any time. 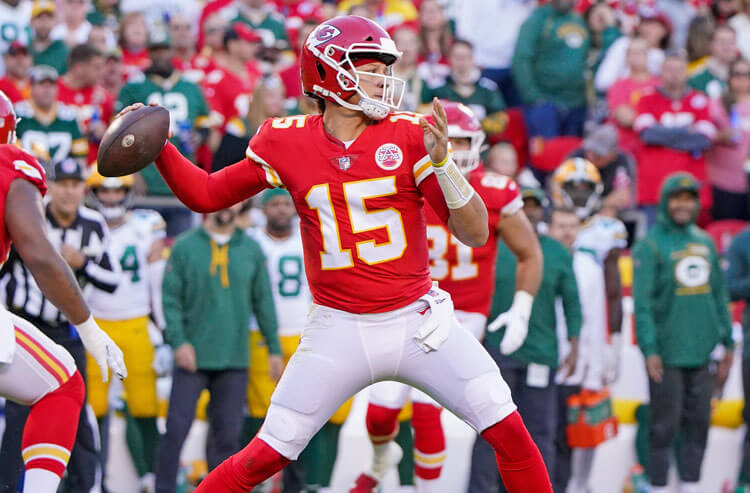 Circa Million Week 10 Picks: Counting on Chiefs to Return to Form
Provided by