The Chargers need to make their playoff push now, and Justin Herbert's probably licking his chops at this weekend's matchup with the Cardinals secondary. See why we're backing L.A. to control a shootout with Week 12's NFL picks.

The Los Angeles Chargers will try to get their season back on track on Sunday when they visit the struggling Arizona Cardinals for a Week 12 showdown.

Arizona has lost three of its last four games, but should benefit from the return of quarterback Kyler Murray this week. Los Angeles is disappointed to be just 5-5 on the season, but still hopes to finish strong and steal postseason berth.

The return of Murray should throw a wrinkle into this game, but will it be enough for Arizona to get the win at home? We’ll discuss who has the edge on Sunday in our NFL picks and predictions for Chargers vs. Cardinals on November 27.

Chargers vs Cardinals picks and predictions

The Chargers ended the 2021 NFL season with a 9-8 record, just missing out on a postseason berth. But Los Angeles went into the offseason with lots of hope for the future, particularly due to the play of quarterback Justin Herbert, who threw for 38 touchdown passes and earned his first Pro Bowl appearance.

That has made this year’s .500 start all the more disappointing. The Chargers are still throwing the ball well and scoring a fair amount of points: their 22.7 points per game ranks a solid 14th in the NFL. But they haven’t been about to get a running game going, and their defense has been porous, allowing 25.8 points per game, the fourth-worst mark in the league.

If the Chargers are going to get right and make a playoff push, this is the time. Los Angeles has lost two straight, but has winnable games against both the Cardinals and the Las Vegas Raiders next weekend. The schedule gets tougher again after that, so it’s now or never for the Chargers.

The Cardinals aren’t as easy a mark as their 4-7 record suggests. It was only a season ago that this team was a Super Bowl contender, going 11-6 and narrowly missing out on an NFL West division title.

What’s changed in 2022? The Arizona offense is scoring just 21.8 points per game, down from 25.6 last season. The bigger problem has been on the defensive side of the ball, however, where the Cardinals — hardly stalwarts last year — are now among the worst teams in the league, giving up 26.9 points per game.

It’s tempting to think that Arizona will be better with Kyler Murray at the helm. Certainly, he’s an upgrade from the likes of Colt McCoy and Trace McSorley. Yet the Cardinals went just 3-6 when Murray was healthy and starting. Murray has put up numbers that aren’t far off from his career marks, throwing 12 touchdowns against just interceptions and running for two more scores. But while Murray isn’t the problem for the Cardinals, he doesn’t look to be the answer either.

Herbert and the Chargers passing attack should tee off against a Cardinals secondary that’s allowing 254.4 yards per game this year. Los Angeles may not be able to run the ball, but it won’t have to, as it can confidently enter a shootout against a somewhat underperforming Arizona offense.

The Cardinals haven’t shown any added spark when playing at home, and Murray should be even less of a factor than usual in his first game back in action. Let’s back the Chargers giving less than a field goal to cover the spread.

Los Angeles opened this game as a 4.5-point favorite. Money has come in on the Cardinals over the course of the week, and Chargers -2.5 is now the main line at most books. The Chargers are 7-3 against the spread this season, while the Cardinals are 5-6 ATS.

While Los Angeles has lost two straight, it did show signs of life against the Kansas City Chiefs last week. Herbert threw for two touchdowns and 280 yards, while running back Austin Ekeler ran for 83 yards while averaging 4.4 yards per carry. While that’s hardly a punishing ground game, Ekeler’s performance was more in line with what the Chargers expect from him, and he should get plenty of touches again against Arizona.

Meanwhile, the Cardinals struggled to stop the San Francisco 49ers last week. Jimmy Garoppolo torched Arizona for four touchdowns, and the Niners totaled another 159 yards on the ground. The 49ers averaged 6.8 yards per play, and while the Chargers don’t have a weapon quite as dynamic as Christian McCaffrey, Herbert leads an offense that should be able to be similarly efficient.

Los Angeles should win this game, and the fact that the spread is under a field goal makes it easy to lay the points.

The total for this game opened at 47.5, and has risen slightly throughout the week. Most books now have their Over/Under set at 48.5.

That number seems a bit low considering that these are two of the worst defensive teams in the league. I’ve already talked about how bad the Cardinals have been on defense this year, but the Chargers haven’t performed much better. Los Angeles is giving up 25.8 points per game, ranking just 29th in scoring defense in the NFL.

While these two offenses have both been fairly average throughout the season, each has reason to expect to score above its average on Sunday. We’ve broken down how the range of weapons available to the Chargers should overwhelm the Cardinals defense. In addition, Murray is a dual-threat quarterback who should open up the Arizona offense a bit, giving it more big play ability than it had with McCoy at the helm.

I’m inclined to take the Over here. These are two teams that seem primed for a shootout, with neither defense likely to put up much resistance. I expect the winning team to have to score 28+ points, with both offenses keeping the pressure on until the final whistle.

The Chargers are 5-2 ATS in their last seven games. Find more NFL betting trends for Chargers vs. Cardinals. 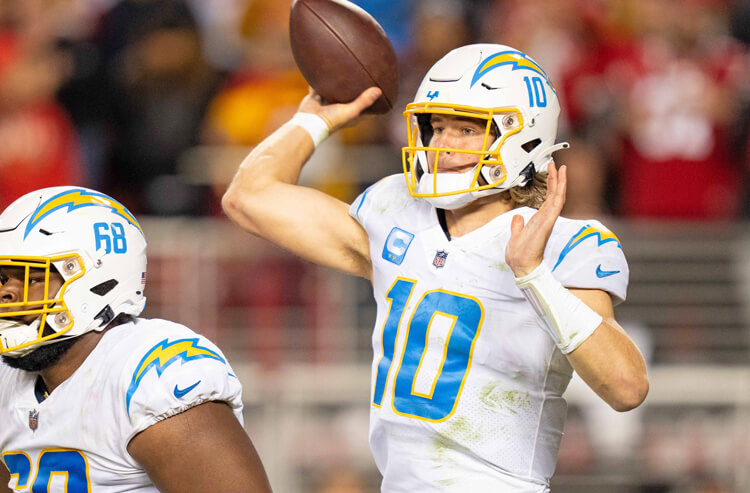