After fully digesting the schedule, we're using this week's NFL betting notebook to break down its most crucial portions — including a rough late-season patch for the Chiefs and a favorable first few weeks for the defending Super Bowl champs.

The calendar flips to June, which is kind of the dark side of the moon for NFL betting.

The smoke has settled on the NFL Draft and offseason moves, the preseason is still two months away, and Week 1 seems like it may never come.

However, through the darkness we find that this lull in excitement is one of the best times to dig into the NFL odds – lookahead lines, futures, win totals, props – and lay the foundation for a fantastic year of football betting.

Our weekly NFL betting notebook helps you do just that. Enjoy.

If you're signing up for a new sportsbook for betting early NFL futures, here are two of the best bonuses* available:

The NFL’s strength of schedule is often a deceptive metric due to it being based on last year’s results. That’s why many NFL bettors modify SOS based on the upcoming season win total projections to get a more modern take on a team’s slate, but even that doesn’t paint the clearest picture.

To me, teams are as good or as bad as their toughest stretch of schedule will allow them to be. And being a big fan of situational handicapping, I like to scour each team’s slate, size up the early lines and pinpoint a series of games that could buckle or boost a team.

With that in mind, here are some of the roughest stretches of schedule for the 2022 NFL season:

We’ll find out what the Bears are made out of during this rough run which includes four road games in five weeks.

Chicago visits the N.Y. Giants in Week 4 (+2.5), plays at Minnesota in Week 5 (+6), then has a short week to prep for its only home stand in this stretch, hosting Washington on Thursday Night Football in Week 6 (+1.5). They play another primetime game at New England on Monday in Week 7 (+6), leaving a short week for a road game at Dallas in Week 8 (+7). The Bears were 3-6 ATS on the road last year.

The Cowboys own the softest SOS in the NFL, but this four-game stretch has them playing four games in three weeks with three of those contests coming away from home.

Dallas is at New York for Monday Night Football in Week 3 (-4), leaving a short week for a home stand with Washington in Week 4 (-6). The Cowboys then head to L.A. to play the Super Bowl champs in Week 5 (+4.5) before a vital NFC East Sunday night fight in Philadelphia in Week 6 (pick’em). Hopefully, Jerry Jones is collecting frequent flyer miles on all that travel.

A late-season swoon could be in store for the Chiefs, who face four road games in five weeks including a stretch of three in a row on the highway from late November into December.

Kansas City opens this nasty stretch of sked at the L.A. Chargers in Week 11 (+1.5) and then plays its lone home game against the damn Super Bowl champion Rams in Week 12 (-2.5). The Chiefs have a rematch of the AFC title game at Cincinnati the following Sunday (pick’em) before heading up the mountain to face the Broncos in the thin air of Denver in Week 14 (pick’em). Whatever’s left of KC at this point is on high “letdown” alert as it heads to Houston as 10-point road chalk in Week 16.

The Silver and Black must have crossed the schedule makers because the Raiders have been handed the Vegas hangover equivalent of slogs from Week 8 to Week 12.

It starts with two early wake-up calls for 1 p.m. ET kickoffs at New Orleans in Week 8 (pick’em) and a cross-country jet to Jacksonville in Week 9 (-3). Las Vegas comes home to the Death Star to clash with the Colts in Week 10 (-2) before heading Rocky Mountain high to play at Denver in Week 11 (+3). This crappy chunk of the calendar concludes at Seattle in Week 12 (-2) – a potent “lookahead” spot with the rival Chargers coming to Sin City the following Sunday.

Dolphins fans are asking Santa for a playoff spot this Christmas but a horrific holiday-season sked could stuff another losing season in their stockings with a five-game haul that would make the Grinch shit. Miami plays four roadies in five games versus 4.5 playoff teams from Dec. 4 to New Year’s Day.

The Saints play just once in the Big Easy in their first four games of 2022, but even that stretch pales in putridness to a run of three road games in four weeks later in the year.

New Orleans has a short week to prep and travel to Pittsburgh in Week 10 (+1.5) after hosting Baltimore on MNF the week before. The Saints go marching back to the Superdome for a showdown with the L.A. Rams in Week 11 (+3) before crossing the country twice: playing at San Francisco in Week 12 (+4) then sailing into pirate water to visit the Buccaneers in Week 13 (+6.5). A bye awaits NOLA after that tilt with Tampa, which could be “lookahead” bait if things go sideways for the Saints during this squeeze of a stretch.

On the flip side of those grueling slices of schedule, other NFL teams get a break from the grinder in 2022. Here are some of the lighter stretches of sked, which could help pad the win totals as well as propel these clubs to glory further down the road.

The Packers are set up for a late-season surge, with three of the final four games inside Lambeau Field and all three of those visitors going from domed venues into the depths of the Wisconsin winter.

It starts with a bye in Week 14 which gives the Cheeseheads two full weeks and a day to rest and prep for a Monday Night Football matchup with the L.A. Rams in Week 15 (pick’em). Green Bay goes to Miami in Week 16 (-1) playing a Dolphins team in the midst of a gauntlet (see above) then comes back to Lambeau for a New Year’s Day date with Minnesota in Week 17 (-5.5). The schedule makers put a bow on the Packers’ regular season with a January 8 home stand versus Detroit in Week 18 (-8). Brrrrrr.

Aaron Rodgers' record vs each team in the Packers' 2022 schedule

The 2022 slate gives the Niners a “San Francisco treat” midway through the year, which could rev up the momentum for the 49ers and roll right into the postseason. San Francisco leaves the Bay Area only once between Halloween and Dec. 14 and doesn’t play a true road game in between.

The Niners follow meetings with the Chiefs and Rams in late October with a bye in Week 9. They’re home to the L.A. Chargers in Week 10 (pick’em) before crossing the border to clash with the Cardinals in Mexico City in Week 11 (-2.5) – a game in which Arizona will be playing its second-straight contest away from home in the thin air. San Fran then comes back to Santa Clara for three straight home games: vs. New Orleans in Week 12 (-4), vs. Miami in Week 13 (-3.5), and vs. Tampa Bay in Week 14 (pick’em).

The Bucs open with two straight road games but then play a very home-centric slate for the better part of the season before getting a break in Week 11. Tampa Bay plays only two true road games – both on the East Coast – in that span and faces its toughest competition inside Raymond James.

Defending their Lombardi Trophy could be a little easier for the L.A. Rams considering how they start the 2022 campaign. Los Angeles hits the highway only twice in the first two months (short trips inside the division) of the season and after winning the Super Bowl, maybe they’ll actually have more fans in the stands than the visitors at SoFi Stadium this year.

All sizzle, no steak

We’ve all seen that guy at the gym sporting the latest Air Jordans, dressed head-to-toe like he’s ready for his pro day in front of the scouts… only to watch him chuck up multiple air balls and dribble off his feet.

Is the NFL equivalent of that guy Tua Tagovailoa?

The Miami Dolphins gifted their quarterback one of the greatest weapons in football history, lightning-quick WR Tyreek Hill, in a deal with the Chiefs this offseason. But many armchair QBs are skeptical that Tua’s skill set – namely his arm strength – can actually utilize Hill to the best of his abilities.

Tagovailoa is not Patrick Mahomes. In fact, his stats would paint him as the anti-Mahomes, ranked 30th in average intended air yards per pass (7.0) and attempting a mere 18 passes of 25 yards or more last season. He totaled only 30 passing plays of 20-plus yards, putting him between Sam Darnold and Davis Mills. Yuck.

Tua clapped back at Twitter trolls and told the media his lack of big-play pop was more due to play-calling than his rumored noodle arm. Letting it all hang out in practice is one thing, but we’ll know soon enough if he can hit Hill for those explosive plays, because if he can’t, Hill will be the first to say it.

Mike McDaniel said Tua is starting to let his guard down a bit and come out of his shell — with quotes like this, I believe it

Tua’s response to the criticisms about his arm strength pic.twitter.com/yAStXxSiqa

Hill isn’t the only new face in a receivers’ room hitched to a questionable QB this season. The Eagles made a move to land A.J. Brown from Tennessee, setting up another big swing in quality passers between Titans QB Ryan Tannehill and Philadelphia’s Jalen Hurts – funny enough the guy who Tua replaced as Alabama’s QB1 in college.

When it comes to Week 1 totals, the thought is that defenses have an edge over the offense early into the schedule because a well-oiled scoring attack takes time to develop chemistry and timing to the playbook while stop units run mostly on instinct and reaction.

However, when it comes to the tallest of the tall totals in Week 1, oddsmakers are setting those lofty numbers for a reason. In that same span (since 2000), Week 1 contests with totals of 50 points or more are 14-9-1 O/U – going Over at a 60.4% clip since we dodge the Y2K bullet.

This year, we have four Week 1 contests currently boasting totals of 50 points or more:

Check out the full NFL schedule, matchups, odds, and more! 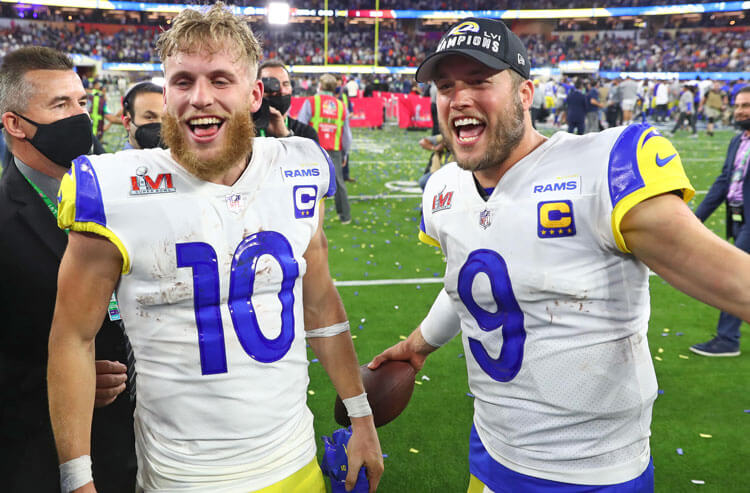