2017 NFC East betting preview and odds: Giants faves in what should be hotly contested division

Despite winning 13 games in 2016 its the Giants, not the Cowboys,who are slight faves to win the NFC East in 2017.

The Cowboys seemingly came out of nowhere to win the NFC East last season, but the target on their backs will be much larger in 2017 and they're squarely in the sights of the Giants, who look to claim their first division crown since 2011. Covers Expert Matt Fargo gives a team-by-team breakdown off the whole division, including season win total picks. **video

Why to bet the Giants: The Giants finished 11-5 last season and made it to the playoffs for the first time since 2011 so they can build on that heading into this year. The offense upgraded with the signing of wide receiver Brandon Marshall and drafting of tight end Evan Engram. The defense upgraded last season and it showed as New York went from dead last in total defense in 2015 to No. 10 last season while allowing the second fewest amount of points. The Giants only lost one of those starters so they could be even better this year. A pretty weak schedule should help them get back to the postseason.

Why not to bet the Giants: While the passing offense was upgraded, the rushing offense remains a huge concern. The Giants finished No. 29 in rushing, averaged 3.5 yards per carry and scored a league-low six rushing touchdowns. There are still talks going on about adding a veteran running back but right now it is Paul Perkins who improved as last year went along. The offensive line is partly to blame and no upgrades were done there either. Four of their first six games are on the road including the opener at Dallas which will be a challenge even if Ezekiel Elliott is out.

Why to bet the Cowboys: Dallas was the biggest surprise in the NFL last season as rookie quarterback Dak Prescott led the Cowboys to the NFC East title. They lost to Green Bay at home in the Divisional Round of the playoffs so they are hungry to repeat and post a bigger playoff run. Prescott was solid since day one and he can only get better although upping his numbers will be tough. Dallas has the best offensive line in football so even without Elliott for a possible six games, they can pave the way for Darren McFadden. The defense is not spectacular but is solid enough to hold its own.

Why not to bet the Cowboys: For a team that goes 13-3, regression is always possible and Dallas will not be sneaking up on anyone this season. The core group of the Cowboys is back but they did lose 10 players that accounted for over 500 games so depth could be an issue. Four of those losses came in the secondary as all four starters are gone and in a pass-heavy league, that is not a good thing. Teams will be better prepared for Prescott with a full year of film to look at. The division has gotten stronger and going 10-0 outside the division is not going to happen again.

Why to bet the Eagles: Quarterback Carson Wentz turned some heads as a rookie but he regressed as the season went along although he is bound for greatness. Wide receiver Jordan Matthews became expendable with the signing of Alshon Jeffrey and Torrey Smith so they traded Matthews and upgraded their secondary by getting cornerback Ronald Darby. Defensively, Philadelphia was sound overall and the Darby trade will help their weakest part of the defense. The Eagles signed LeGarrette Blount to replace Ryan Matthews to hopefully improve the running game.

Why not to bet the Eagles: With the overall division better, it will be hard for the Eagles to improve on their seven wins from last season considering they started 0-4 in the division and winning the last two games when they meant nothing in Week 16 and Week 17. The schedule is tame but the opening stretch is a challenge with four of their first six games on the road and the two home games coming against the Giants and Cardinals. Philadelphia did not lose much in any big areas but did not add enough to gain significant progress either.

Why to bet Washington: Kirk Cousins has become a top-tier quarterback and should have another season of outstanding numbers. There were questions in the offseason if he would even be here but is back and has plenty around him to achieve success. Washington signed wide receiver Terrelle Pryor to make up for the loss of DeSean Jackson and Pierre Garcon and they have a stable running game behind a strong offensive line that allowed just 23 sacks, fourth fewest in the NFL. Greg Manusky is the new defensive coordinator which should improve the unit.

Why not to bet Washington: That defense however was awful as the Redskins allowed 377.9 yards per game which was No. 28 in the league. A new coordinator and scheme can help but it might take time to come together and in a division which should be tight, the progress cannot take too long. While the signing of Pryor helps, losing two quality receivers is hard to overcome. Rob Kelley is the starting running back but he went over 100 yards only once last season so there will be little offensive balance. Like the Eagles, not enough was brought in to make a significant jump up. 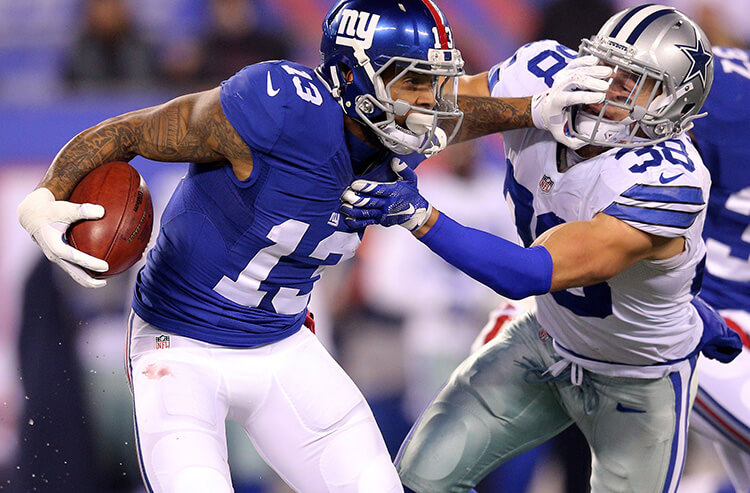 2017 NFC East betting preview and odds: Giants faves in what should be hotly contested division
Provided by

Texans vs Cardinals Week 7 Picks and Predictions: No Loss in the Cards
Josh Inglis | Oct 22, 2021

Lions vs Rams Week 7 Picks and Predictions: Rams Continue To Roll in Goff Reunion
Jason Logan | Oct 22, 2021
About Us
Contact Us
Careers
Our Team
Brand
Testimonials