Two ACC squads headed in very different directions this season face off in Week 4, with two contrasting QBs highlighting a very clear edge for Syracuse. See why this has a Virginia fade written all over it in our college football picks.

The Virginia Cavaliers kick off their ACC schedule on Friday when they travel to New York to face the Syracuse Orange at the JMA Wireless Dome.

Both teams are coming off dramatic wins in the closing seconds last week, and each will look at Friday’s game as an opportunity to ride that momentum. But while both teams escaped with wins in their last games, their seasons appear headed in very different directions.

Our college football picks and predictions for Virginia vs. Syracuse will show why one team has a clear advantage in this September 23 matchup.

Virginia vs Syracuse picks and predictions

The Cavaliers nearly suffered a loss to in-state rival Old Dominion last Saturday after the Monarchs scored to take a 14-13 lead with just over a minute remaining. But Virginia drove the field to set up a 26-yard field goal by Brendan Farrell as time expired to grab a 16-14 win. The victory moved Virginia to 2-1 on the season.

Syracuse survived an even wilder ending on Saturday against the Purdue Boilermakers. The Orange led 10-9 at the end of the third quarter before the two teams combined for 42 points in the fourth. Purdue took the lead with under a minute left, but Garrett Shrader threw a 25-yard touchdown pass to Oronde Gadsden II to retake the lead with just seven seconds left. The Orange held on to win 32-29 and remain a perfect 3-0 this year.

Neither of those wins were convincing, but they came against very different opponents. While Syracuse scored its first win over a Big Ten team since 2013, Virginia was barely able to fight off a Sun Belt squad that lost to East Carolina by 18 points the week prior.

The Cavaliers lost 24-3 to the Illinois Fighting Illini — incidentally led by former Syracuse quarterback Tommy DeVito — earlier this year, and only beat the FCS Richmond Spiders 34-17. Meanwhile, the Orange have scored wins over Power 5 squads in Purdue and Louisville, beating the Cardinals 31-7 to open their season.

Those results suggest a clear talent gap that wasn’t apparent heading into the season, and one that is larger than the 9.5-point spread suggests. Shrader has emerged as a star quarterback for Syracuse, throwing for eight touchdowns (and running for three more) without a single interception through three games.

On the other hand, Virginia quarterback Brennan Armstrong is struggling following a breakout season in 2022. Through three relatively soft games, Armstrong is completing just 53% of his passes, and has thrown just two touchdown passes against three interceptions.

I expected Syracuse to be laying about two touchdowns in this game, especially as the home team. The fact that we can take the Orange giving only nine points is an absolute gift. Expect Syracuse to win big as it attempts to build a Top-25 resume in the early portion of the year.

Syracuse enters this Friday night contest as a nine-point favorite at most sportsbooks. So far this year, the Orange have exceeded expectations, coving the spread in each of their first three games. Meanwhile, Virginia is 0-3 ATS, painting a picture of two teams headed in very different directions this season.

These two teams stack up evenly in some respects. Virginia is averaging an extra five yards per game on offense, while the Orange allow nine fewer yards per game. Both defenses have played well overall, allowing under 20 points per contest.

Those numbers come against very different strengths of schedule, however. Virginia’s win over Richmond can roughly be compared to the Syracuse victory over the Connecticut Huskies, a team that has essentially played at an FCS level in recent years. Outside of those games, the Orange are 2-0 against Louisville and Purdue, while the Cavaliers beat Old Dominion by just two points and lost to Illinois by three touchdowns.

Virginia has won its last three meetings against Syracuse. However, the two teams haven’t faced off since 2015, when the Cavaliers scored a 44-38 home win over the Orange. With the two schools playing in different divisions, these two ACC teams rarely face off despite sharing the same conference affiliation.

While the total opened at 54.5, the public has bet that number down to 52.5 as of Wednesday. Both teams have played relatively well on defense this year, with the exception of Syracuse’s fourth-quarter shootout with Purdue last weekend. The Orange are allowing just 16.7 points per game, while Virginia is giving up just 18.3 points per game to opponents.

The Orange have averaged 37 points per game against fairly strong opposition this year. They’ve managed to light up the scoreboard even without big performances from sophomore All-American running back Sean Tucker, who looked to be the offensive star for Syracuse heading into the season. Tucker has just two touchdowns and is averaging 3.8 yards per carry. Should he get back into form, the Orange offense could prove dangerous even against elite ACC competition later this year.

Virginia is scoring just 17.67 points per game. Take out its win over Richmond, and that number drops to an anemic 9.5 average against its two FBS opponents. This doesn’t look like the week for Armstrong to break out, as Syracuse employs two former Virginia assistants who know the senior well. That includes offensive coordinator Robert Anae and quarterbacks coach Jason Beck, both of whom worked hand-in-hand with Armstrong at Virginia.

Syracuse is 7-1 against the spread in its last eight home games.  Find more NCAA betting trends for Virginia vs. Syracuse. 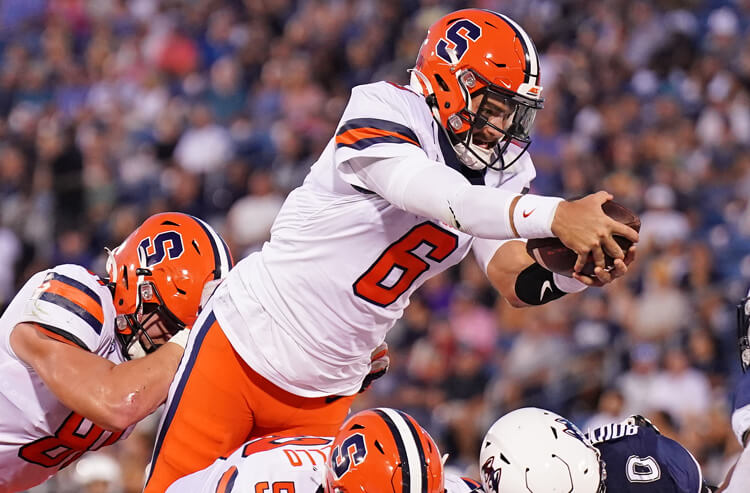 Virginia vs Syracuse Odds, Picks and Predictions: Orange Juice the Cavs
Provided by