The Utes are spotting the Aztecs more than a touchdown in Week 3, but the dogs have a good chance of keeping this game close, regardless of who's under center. Find out why with our Utah vs San Diego State picks.

The San Diego State Aztecs will be looking to stay perfect with a big upset over the Utah Utes at Dignity Health Sports Park in Carson, California on Saturday, September 18. The game is slated to start at 7:00 p.m. ET, when San Diego State will be going for back-to-back wins over Pac-12 opponents.

Will the Utes rebound from their loss in the Holy War with a decisive victory over the Aztecs? Keep reading our Utah vs. San Diego State picks and predictions to find out.

There appears to be some sharp action on Utah in this game, as the Utes opened as 7-point favorites and the Aztecs are now 9-point underdogs in some places — with most of the action on San Diego State thus far. The total opened at 44.5 and has stayed put in some places, but it can also be found at 45.0.

San Diego State is 7-1 against the spread in its last eight games as a home underdog. Find more NCAA betting trends for Utah vs. San Diego State.

Utah is going to be hungry for a win after a loss to the BYU Cougars in the Holy War, and the team now faces a Mountain West Conference opponent. On paper, the Utes have to be feeling pretty good about this matchup. However, it isn’t that simple at all.

While San Diego State is dealing with an injury to quarterback Jordon Brookshire, this is a team that is better than your average Group of Five program. The Aztecs are coming off a 38-14 victory over the Arizona Wildcats, and they did that as 1.5-point road underdogs. San Diego State has now rushed for 519 yards through only two games this season, and Brady Hoke’s team now gets to run against a Utah defense that is allowing 190.5 rushing yards per game this season.

Even if Brookshire ends up missing this game, the Aztecs likely wouldn’t lose much with backup Lucas Johnson replacing him. Johnson, yet another dual-threat quarterback, was expected to be the starter coming out of training camp, but he was beaten out by Brookshire later in the process. Johnson is, however, prepared for this opportunity, as he has been taking first-team reps this week. These quarterbacks also happen to be similar in that they both aren’t great passers, but they can make plays with their legs. With all that considered, this offense really shouldn’t change that much.

Defensively, the Aztecs returned nine starters from a defense that was 11th in the nation in points per game allowed last year, and they were also seventh in the country in rushing defense. This year’s unit appears to be following suit, as the team has allowed just 97 rushing yards through two games this year. That’s one of the major reasons to back San Diego State here, as Utah is going to have a tough time winning without a running game. The Utes can’t rely too much on quarterback Charlie Brewer, who was just 15 for 26 with 147 yards, one touchdown and one pick against BYU last week. He’s not in a position to go out and win games on his own, which is what the Utes could be asking of him in this one.

Overall, this spread just looks way too large when you consider the way these teams play. The Aztecs aren’t the type of team to get blown out in their home stadium, and it wouldn’t even be shocking if they won this game outright.

This game isn’t going to turn into a shootout — and the Aztecs are very unlikely to match last week’s 38-point outburst — but this total just seems way too low right now. Last week’s Utah game didn’t feel like it had all that much scoring, and it still ended up finishing with 43 points. The Utes should be able to muster up a bit more than 17 points this week, and the Aztecs are more than capable of scoring in the 20s in this one. 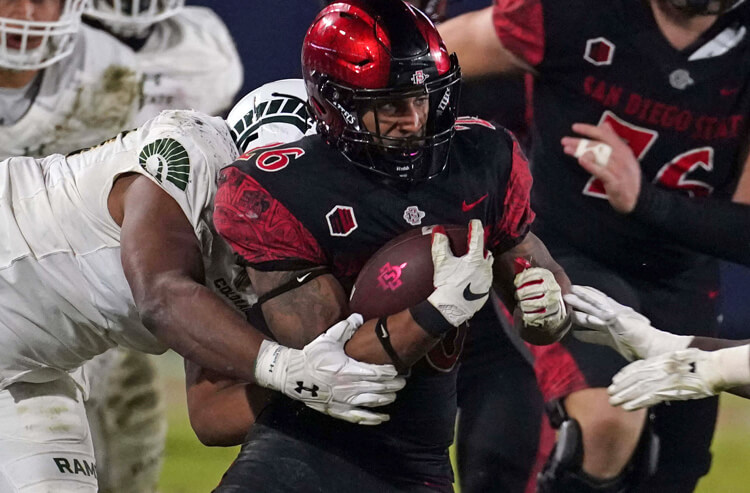