USC fired its head coach, Clay Helton, after just two weeks as the coaching carousel spins once again in Southern California. Find out in our picks whether more Trojans dysfunction makes us want to fade them against the home Washington State Cougars.

The USC Trojans look to move past the Clay Helton era with a victory as they travel to Pullman to take on the Washington State Cougars.

All eyes will be on the USC coaching search after the firing of Helton, who was 46-24 with the school but couldn’t live up to the program’s expectations. The final straw was an embarrassing defeat to Stanford, leading to a coaching change only two weeks into the season.

Will the Trojans be up to the task despite all the distractions?

Check out our picks and predictions for USC vs. Washington State on Saturday, September 18 to find out.

The line opened USC -9.5 but has moved down to -8.5 after the Helton news. Use the live odds widget above to track any future line movements right up until kickoff and be sure to check out the full college football odds before placing your bets.

The road team is 6-2 ATS in the last eight meetings between these two teams. Find more NCAA betting trends for USC vs. Washington State.

Taking the Trojans the same week that they fired their coach? Must be crazy, right?

I think it would also be crazy to consider taking Washington State with any confidence right now after a tumultuous offseason and an underwhelming start to the season. First, it lost straight up at home as a 17.5-point favorite against Utah State. Then, the Cougs failed to cover the spread as 31-point favorites in a 44-24 win over Portland State in which they allowed 420 total yards to the FCS school.

Both teams have been in the headlines for the wrong reasons. For the Trojans, it’s been their perplexing mediocrity under Helton and now the endless talk of their ensuing coaching search.

For the Cougars, it’s been head coach Nick Rolovich’s vaccination status and quarterback Jayden de Laura’s offseason suspension for a DUI. Things were dire enough that the team turned to much-maligned Tennessee transfer Jarrett Guarantano as the starting quarterback before he left the quarterback due to injury.

All said, we have two untrustworthy programs from a betting standpoint, so we’ll look to the more talented team: the Trojans. They’ve been underwhelming under Helton for a few seasons now, so it’s difficult to imagine a dramatic drop-off now that he’s been fired. They still have a dangerous offense led by quarterback Kedon Slovis and wide receiver Drake London and should exploit this beatable Washington State defense.

The road team has been dominant in this series as of late, covering in six of the last eight matchups. We’re expecting that to continue here.

Washington State’s defense is in bad shape, having given up 430.5 total yards of offense over its first two games. Keep in mind that those two contests came against an FCS team and a 1-5 Mountain West team that scored only 15.5 points per game a season ago — hardly elite competition.

The Trojans may not be elite, but they are certainly dangerous. They’re averaging 412 yards of offense per game and will look to the wide receiver trio of London, Tahj Washington, and Gary Bryant Jr. to exploit a defense allowing nearly 300 passing yards per game.

The Cougars should be able to move the ball offensively as well, led by star running back Max Borghi and dangerous after-the-catch receiver Travell Harris. This is a USC defense that was bullied around by Stanford, so it’s not as if it poses the most intimidating threat.

We’re taking the Over. 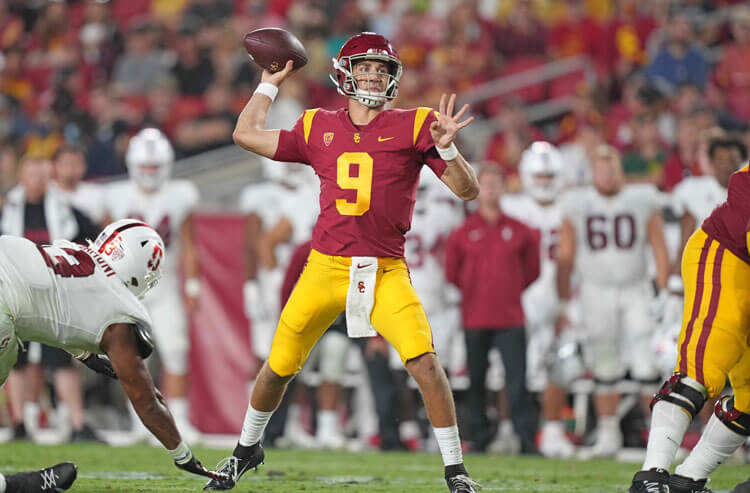 USC vs Washington State Picks and Predictions: Trojan Horse in Pullman
Provided by