In the only FBS college football game of the fall thus far played in front of no fans, the San Jose State Spartans will travel to Hawai'i to take on the Rainbow Warriors in a Mountain West conference clash.

After it was announced that Aloha Stadium was no longer structurally fit to host fans, Hawaii will be playing in a newly renovated Ching Field that will be completely void of spectators — so don’t expect much of a home-field advantage in this one.

Will the Spartans, sitting as a 6.5-point college football betting favorite, be able to fly to Hawai'i and move to 8-2 SU up in their last 10 games — and cover as road chalk?

Check out our picks and predictions for San Jose State vs. Hawai'i, with kickoff set for Sunday, September 19 at 12:30 a.m. ET, to find out.

San Jose State opened at -7 on most books, but it’s been bet down to -6.5 as of the time of this writing. Use the live odds widget above to track any future line movements right up until kickoff and be sure to check out the full college football odds before placing your bets.

The Spartans are 5-0 ATS in their last five meetings in Hawai'i. Find more NCAA betting trends for San Jose State vs. Hawai'i.

The San Jose State Spartans have been on a tear in Mountain West Conference play, going 18-6-2 ATS in their last 26 conference games. It’s no fluke, as they’re extremely well-coached under Brent Brennan and won their first seven games a year ago en route to a conference championship.

The offense welcomes back nine starters, including sixth-year quarterback Nick Starkel, who has thrown for over 300 yards in each of his starts this season. He has a plethora of options to throw to, as well, as four different receivers have already passed the 100-yard mark.

This is a spot that this team has typically thrived in, as San Jose State is 18-5 ATS in its last 23 games as a road favorite. The Spartans are rightful favorites here and won’t face much of a disadvantage being on the road in an empty Ching Field.

Not only did they win their first seven games a year ago — they won all of those games by double digits. They’ve made their name known as a contender in this conference, and this is a spread that they’ve covered in each of their last eight wins (they beat Southern Utah 45-14 in the opener).

Despite taking a tough road loss to No. 15 USC in their most recent game, the Spartans simply appear to be the better team compared to Hawai'i, who is getting outgained 5.8 to 6.8 in yards per play so far this season. Although those stats are slightly skewed by the Week 0 drubbing at the hands of UCLA, the Rainbow Warriors proceeded to give up 35 points in failing to cover in a win over Portland State, while coughing up 45 points to Oregon State in an 18-point loss.

One team is headed in the right direction and thrives in this spot, while the other is limping out of the gate to start the year. We’re laying the points with the road team.

It’s simply not realistic to consider laying money on the Under in a Hawai'i game right now. Its defense, which looked solid a year ago in allowing only 27.6 points per game, has completely crashed and burned to start the season.

After UCLA embarrassed them in the opener by scoring 31 points in the first half and essentially resting their starters for the rest of the game, they allowed 35 points to an FCS school and then were gouged for 558 total yards by an Oregon State team playing its third-string quarterback.

All in all, the Hawai'i "stop" unit allows an astonishingly poor 6.8 yards per play — the 11th-worst mark in the country.

Additionally, these two teams play at a decent tempo, with Hawai'i averaging 70 plays per game and San Jose State averaging 66.

The Spartans should be able to score with relative ease in this one, as their offense is averaging a robust 7.8 yards per play, led by the experienced Starkel at QB and a deep receiving corps.

Hawai'i’s offense is capable too, led by electric RB/WR Calvin Turner Jr., as it's averaging 28.7 points per game — despite playing two contests against Pac-12 opponents. 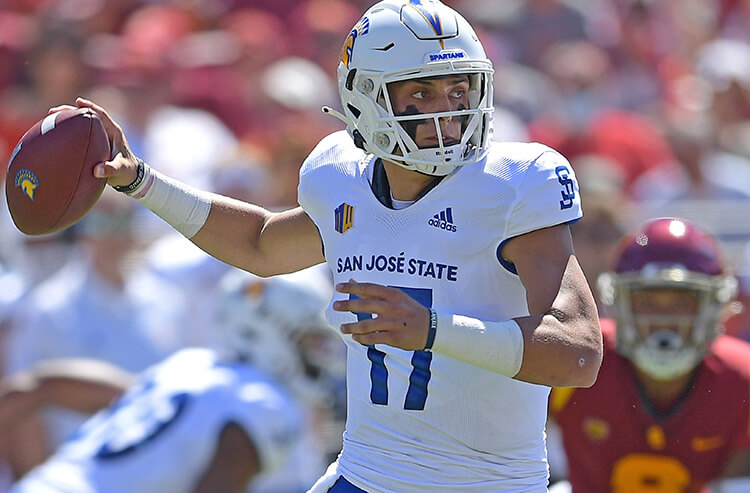