College football betting in Week 13 features a battle between two of the top teams in the Mountain West Conference as the San Jose Spartans face the Boise State Broncos.

The Spartans have been one of the biggest surprises of the season going 4-0 SU and ATS but they opened as 11-point road underdogs against Group of Five powerhouse Boise State, who is 4-1 and fresh off a 40-32 win over Hawaii.

We break down the NCAA football odds with our best free picks and predictions for San Jose State vs. Boise State on Saturday, November 28, with kickoff at 4 p.m. ET.

It will be a frigid but clear day at Albertsons Stadium in Boise, Idaho, with temperatures between 20 and 37 degrees and a mild breeze of 3 mph. Be sure to monitor the gametime conditions with our NCAA football weather info.

Boise State is one of those smaller schools that always seem to crack the Top 25 and the Broncos are off to another strong start in 2020, going 4-1 to begin the season. That said, covering 11 points won't be easy against a San Jose State squad that has exceeded expectations with four straight wins to open the year.

The Spartans went just 5-7 in 2019 but their offense got on track in head coach Brent Brennan's third year with the program. With new QB Nick Starkel now at the helm, they should be able to move the ball against a Boise State secondary that's allowing 263 passing yards per game over their last three contests.

Starkel is a grad transfer that started five games for Arkansas in 2019 and has looked great this year, completing 70.1 percent of his passes for 980 yards through four games, despite missing almost the entire contest against San Diego State.

As for San Jose State's defense, it's gone from the weakness of this team to perhaps the biggest strength, limiting every opponent this season to 21 or fewer points. Take SJSU and the points.

Boise State has been the best Over bet in the country, going 5-0 to the Over this season. However, it's worth noting that the Broncos are 10-3 to the Under in their last 13 games against teams with a winning record.

Another trend that points to the Under is San Jose State going 4-1 to the Under this year, thanks to a vastly improved defense.

When you add in the fact that both of these offenses rank outside the Top-110 schools in the country in plays per game, you have a tempo that will likely lead to this contest going under its lofty total of 58.

While the Spartans likely still won't be able to stop a high-powered Boise State attack, led by quarterback Hank Bachmeier, they should be able to at least slow them down enough to make them go Under their team total of 35.5. 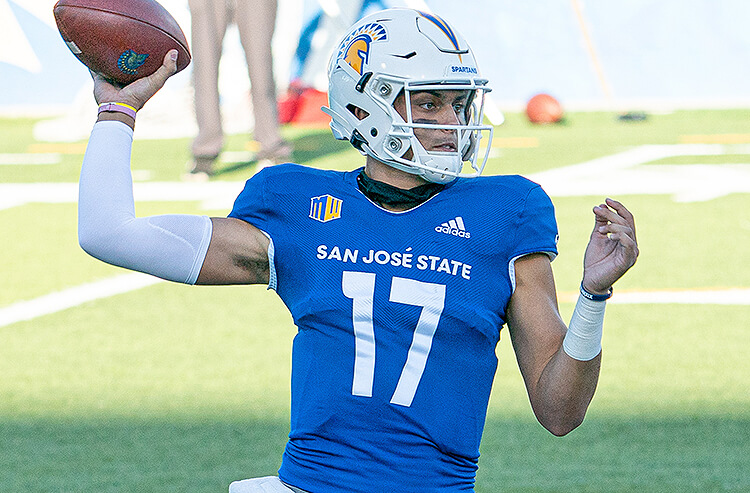