After guiding Jackson State to a 10-1 record this year (and taking home SWAC Coach of the Year honors), Deion Sanders will look to top off 2021 with a victory over PVAMU. Our college football betting picks like him and the Tigers to do so — emphatically.

The minute Deion Sanders became head coach at Jackson State, it was over for the SWAC. In their second season with "Coach Prime," the Tigers went 10-1 on the season — with the one loss coming to an FBS opponent in UL Monroe.

Against the SWAC, no team was able to solve Jackson State, and the Tigers are looking to put a cherry on top of their season against the Prairie View A&M Panthers in the conference title game.

Prairie View A&M went 7-4 on the season and lost its final three games of the season. It looks as though the Panthers have run out of momentum, and are college football betting underdogs in Saturday's game, getting seven points against JSU.

Here are our best free picks and predictions for  Prairie View A&M vs. Jackson State in the SWAC Championship game on Saturday, December 4.

Jackson State opened as a 7-point favorite and has stayed steady around that number since, with a couple of sites holding a -7.5 at even money. The total also hasn’t really moved since opening at 43.5, although there are a handful of spots where you can find a 43.

The forecast for Saturday is calling temperatures in the mid-70s, with a 25% chance of humidity and winds around 6 mph.

Jackson State is looking for its first SWAC Championship since 2007, and facing a struggling Prairie View A&M team that has lost three straight games, the Tigers favored by just 7-points seems way too low.

Quarterback Shedeur Sanders (yes, the coach's son) has thrown for 28 touchdowns with just five interceptions on the year and will eclipse 3,000 yards passing in this upcoming game. Pass protection hasn’t been great for Jackson State but the receiving group is solid for a SWAC team. Keith Corbin III has been Sanders’ favorite target with six touchdowns on 63 receptions with 887 yards (14.1 yards per catch).

Defensively, however,  is where the Tigers really excel. They’ve been terrific in the ground game, giving up the second-fewest yards rushing per game (98) in conference play, and dominant in getting to the QB with a SWAC-leading 35 sacks in eight conference games.

On the other hand, PVAMU has been a disaster over the last month. The Panthers knocked off Alabama State by four but then lost to Alcorn by two and Mississippi Valley State by five points. Sandwiched in between those two games was a loss to Texas A&M, but they’ll get a pass there.

It’s been unbelievable how Prairie View has been able to stick around in games this season. QB Jawon Pass has thrown for 16 touchdowns against nine interceptions. Protection has been reliable for Pass but overall, he doesn’t have the talent that Jackson State does on the offensive end. The Panthers are fourth in the SWAC in rushing ypg (against conference foes), but going against a dominant Jackson State D-line is going to keep them quiet.

After winning SWAC coach of the year, let's back Deion Sanders and Jackson State to cap off a phenomenal season with a rather easy win.

Neither offense is very impressive but Prairie View A&M likely won’t be able to score much against Jackson State in this one.

The strength of this Panthers team is in running the ball, but staying committed to running against the Tigers' defense (which is one of the best in the FCS) will both keep the score low and the clock running.

Meanwhile, Jackson State also has the best pass defense in the SWAC, while the Panthers ranked third in intra-conference pass defense, so they should be able to somewhat limit the Tigers' aerial attack.

We’ll ride the Under here.

Jackson State, on paper, is the much better team. For whatever reason, the Panthers are always sticking around in games — but they also haven’t faced Coach Prime & Co. yet this season.

While it's not an FBS school, Jackson State can compete with the big dogs and the talent is getting closer and closer to possibly moving up to the top level.

That should be enough for Jackson State to get a double-digit win against a reeling Prairie View A&M team. 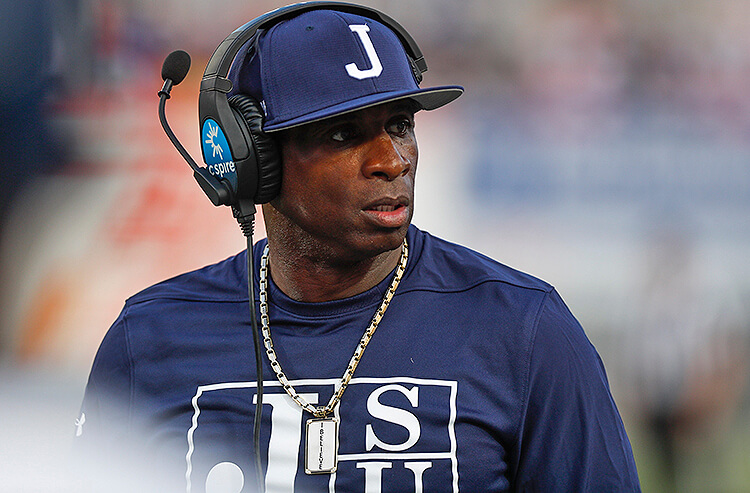 PVAMU vs Jackson State SWAC Championship Picks and Predictions: Tigers Get First Title Since '07
Provided by