Maryland vs Ohio State Picks and Predictions: Terps Can't Stop Buckeyes. At All.

The Terps' leaky defense gets to take on one of the most finely-tuned offenses in the country and their resurgent QB in Week 6. Find out if there's any hope of stopping them, or covering, with our Maryland vs Ohio State picks.

Just two weeks ago, Ohio State Buckeyes fans were calling for starting quarterback CJ Stroud to be benched for Kyle McCord. Instead, Stroud took the start against Rutgers and won OSU fans back with the best performance of his career to this point.

Ohio State will now welcome the Maryland Terrapins to Ohio Stadium for a Big Ten matchup at 12:00 p.m. ET Saturday as the Buckeyes look to show that they’re still the kings of the Big Ten.

As massive favorites, can Ohio State replicate last week’s success against an overachieving Maryland team? Our Maryland vs Ohio State picks and predictions are below.

Ohio State opened as a 21.5-point favorite. The Buckeyes have since dropped to 20.5 points, giving potential Ohio State bettors a chance at covering with a three-touchdown lead.

The total has increased from 68.5 up to 71.5 at some outlets as of Wednesday afternoon.

Buckeyes are 6-0 ATS in their last six games in October. Find more NCAA betting trends for Maryland vs. Ohio State.

The Maryland Terrapins won four straight games to start the season against low-level competition. There was noise surrounding the program, but any noise you heard then, you’re not going to hear now.

Maryland was absolutely destroyed against Iowa last week, 51-14, proving that The Terps just don’t belong anywhere near the AP Top 25 this season.

The Terrapins offense has done some nice things behind Taulia Tagovailoa. But while he’s thrown for 12 touchdowns, he’s also has thrown six interceptions on the season. For the most part, the offense isn’t all that bad but against a team like Iowa (or Ohio State), this unit is going to struggle.

Ohio State has no weakness on defense, although they've allowed nearly 400 yards per game this season in five contests. Tackling has been a slight issue, but overall, the Buckeyes have been fine, allowing about three touchdowns per game.

Offensively, CJ Stroud missed a little bit of time due to an injury, but since he’s returned, he’s looked like the real deal. Maryland’s secondary has allowed just 226.5 yards per game in the air, but again, they haven’t faced any offense like Ohio State.

The Buckeyes literally have the best wide receiver duo in the nation and as long as Tre’Veyon Henderson is healthy at running back, the run game should have no problem against Maryland. The biggest liability for the Terrapins this season has been stopping the run.

Once Ohio State has success rushing the football, things will open up in the passing game and it’ll be impossible to stop this offense. Just ask Rutgers.

I’m not afraid to say this: I think Ohio State can score on every single possession against Maryland. Unless, of course, Ohio State elects to empty the bench in the fourth quarter like they did against Rutgers.

Iowa needed the turnovers to score points. Meanwhile, Ohio State just needs the ball and they’ll score in a blink of an eye. With the offense and potential takeaways, OSU could hit Over on that 50-marker. On the other hand, Ohio State has allowed nearly 21 points per game.

Maryland can score on a couple of possessions in this game and potentially a garbage touchdown late in the game for three touchdowns. I’d project Ohio State scoring right around 55 points and Maryland to score about 21. 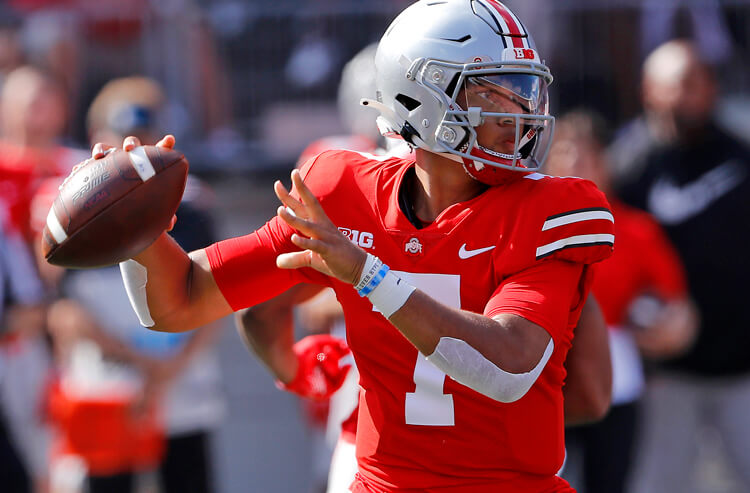 Maryland vs Ohio State Picks and Predictions: Terps Can't Stop Buckeyes. At All.
Provided by