Nebraska vs Wisconsin Picks and Predictions: Cornhuskers Can Stay Within The Number

This is a matchup that's closer than the spread and the two teams' records might suggest. Read more about this low-scoring affair in our Nebraska vs. Wisconsin picks and predictions.

It’s been quite the turnaround for Wisconsin this season. The Badgers are 7-3 and have won six straight after starting 1-3. Nobody expected Wisconsin to bounce back the way they have.

The Badgers have put together one of the best defenses in the nation and will look for win number eight against a Nebraska Cornhuskers team that won’t be playing a bowl game this year at 3-7.

In a game that figures to be low-scoring, will Wisconsin cover a two-possession spread? Here are our picks and predictions between the Nebraska Cornhuskers and the Wisconsin Badgers.

Nebraska opened as a 13-point favorite way earlier in the season. However, things have changed since then and now Wisconsin is a 9-point favorite at most outlets. If you look hard enough, some outlets even have a -8.5 hanging for Wisconsin.

Meanwhile, the total has shifted from 41.5 at open to 42 at most outlets. Use the live odds widget above to track any future line movements right up until kickoff and be sure to check out the full college football odds before placing your bets.

The Under is 7-0 in Cornhuskers' last seven games as a road underdog. Find more NCAA betting trends for Nebraska vs. Wisconsin.

Nebraska vs Wisconsin picks and predictions

It’s been an unfortunate season for Nebraska. At 3-7, the Cornhuskers look awful on paper, but they haven’t really performed that bad recently.

The Cornhuskers took a nine-point loss to Ohio State a couple of weeks ago, lost by five to Purdue, lost by seven to Minnesota, and lost by three to Michigan. They can’t close out games, but they’ve been very competitive this season.

The Nebraska offense is averaging 459.2 yards per game with nearly 200 yards rushing. Defensively, Nebraska has allowed just 363.5 yards per game. Yet, again, Nebraska is 3-7 on the year and in danger of going 3-8 after this game against Wisconsin.

Don’t expect Nebraska to play lights out offensively against Wisconsin. Wisconsin isn’t Georgia but they’ve been playing like them recently, allowing just 14.6 points per game this season and 216.3 yards per game. These are insane stats for the Badgers. The rushing defense has allowed just 60.6 yards per game and Nebraska is averaging nearly 200 yards rushing per game.

This game is going to be low-scoring. Both teams allow less than three touchdowns per game. In a low-scoring game where neither offense will get going, I’ll take Nebraska with the points.

On the flip side, there’s nothing to rave about with Wisconsin’s offense. The passing game is weak and while the run game will do damage against Nebraska, at least the clock will tick.

Between Nebraska’s quarterback in Adrian Martinez and Wisconsin’s quarterback in Graham Mertz, these quarterbacks have combined for 17 interceptions on the year. The offense mostly flows on the ground for both of these teams.

Of course, Wisconsin has been tremendous in stopping the run this season and has been ridiculous defensively all season. Meanwhile, Nebraska can get burned in the running game, but the moment Wisconsin tries to throw the ball, that will be dangerous, knowing how well Nebraska’s secondary has played all season.

I’m grabbing the Under here. A 17-14 game wouldn’t surprise me one bit. 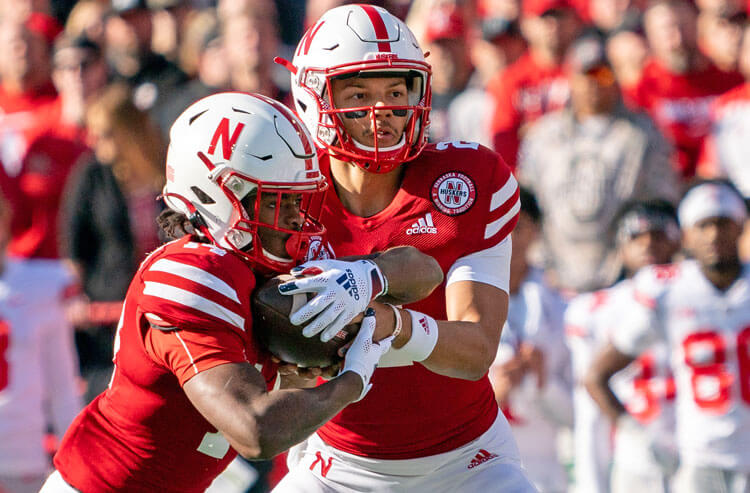 Nebraska vs Wisconsin Picks and Predictions: Cornhuskers Can Stay Within The Number
Provided by