Memphis vs Houston Picks and Predictions: Statement in Space City

The Houston Cougars may have a spot in the ACC championship game in hand but continuing their excellent form could get them a New Year's Six bowl. Find out what that means for the Memphis Tigers here with our college football betting picks.

From a literal standpoint, Houston has little reason to care about a visit from Memphis. The Cougars already have a spot in the ACC championship game sewn up. But, they are now in the Top 25 and could conceivably make a case for a New Year’s Six bowl if they run their current nine-game winning streak all the way to 12 games.

They may be able to simply beat the Tigers to keep that streak alive but doing so with style would help the rolling momentum that seems to have carried Houston thus far.

Here are our free college football picks and predictions for Memphis at Houston on November 19, with kickoff set for 9:00 ET.

Houston opened as a 10.5-point favorite on Sunday, but that quickly jumped a key number to -9.5 before falling to -8.5 on Tuesday, where it remains. The total moved with similar timing, beginning the week at 62.5 points before quickly falling to 61.5 on Sunday, eventually dropping as low as 59.5 on Thursday.

Memphis is 0-4 ATS in its last four road games and 0-7 ATS as a road underdog in the last four seasons, including two such moments this year and three in 2020. Find more NCAA betting trends for Memphis vs. Houston.

Memphis vs Houston picks and predictions

In a season of surprise results, few retroactively look as odd as Houston’s season-opening 38-21 loss to Texas Tech. The Cougars held a commanding 21-7 lead at halftime before giving up 31 unanswered second half points. Since then, the Red Raiders have fired one head coach and already hired another, while Houston has rattled off nine straight wins.

It took a bit for anyone to notice the Cougars were putting together a strong season because of that Week 1 faceplant. Their next two wins were dominant, but they were also at Rice and against FCS-level Grambling State. Then, struggling to put away Navy looked like another indicator of a struggle of a season, when it was really just the Midshipmen making life difficult with their triple-option.

The reality is, Houston has been really good all season. Maybe it needed that slap in the face from Texas Tech to focus, but after that, the Cougars have averaged 40.9 points per game. If Cincinnati was not consuming nearly all the bandwidth discussing Group of Five football, Houston would be seen as the talented team it is.

The Cougars outgain opponents by 121 yards per game. They are plus-11 in turnover differential. They score on 88.1 percent of their red zone drives. In nearly every facet of the game, Houston has proven itself to be head and shoulders above its AAC competition, conference championship game against Cincinnati pending.

Memphis has done none of that. It has lost five of its last seven games, in conference play it averages 26.5 points per game, and the Tigers outgain their opponents by only 41.3 yards per game. This is a middling Memphis team in every regard, a fact that was initially obscured by its officiating-aided win against Mississippi State on September 18.

One of these teams has been underappreciated all year, while the other is in the midst of a two-month slide toward a losing season.

While the Cougars can put up points, they have done a decent job of keeping most of their opponents in check. Sure, SMU scored 37 on Halloween Eve against Houston, but the Mustangs are the third-best team in the AAC, and that was essentially a play-in game for the conference championship game. A week later, perhaps emotionally hungover from the important win against SMU, Houston escorted South Florida to 42 points.

Remove those two instances — admittedly an exercise in selective statistics, but with sample sizes as small as a football season, sometimes that is necessary — and the Cougars have given up only 13 points per game in their other seven contests since that Texas Tech debacle.

Even if that seems like a selective statistic, seven games of excellent defense — not allowing anyone to score more than 24 points and keeping four opponents to 10 or fewer — should outweigh two lapses.

Memphis relies on the pass more than the run, gaining more than twice as many yards through the air than on the ground even though the play calls are split nearly 50/50. Houston happens to have the country’s No. 26 defense in opposing passing efficiency. So, once the Cougars slow down the Tigers’ air attack, they will not need to worry too much about a dynamic ground approach.

Houston is simply better than Memphis, and aside from that controversial kickoff return for a touchdown against Mississippi State, the Tigers have never shown enough competence to threaten a surprise performance against the Cougars. Beating SMU in a letdown spot following that loss to Houston does not change the fact that Memphis is a so-so team this year.

The Cougars have won nine straight. They covered in six of those. They’ll make it 10 straight wins with seven covers, perhaps the most under-the-radar great season in the country this year. 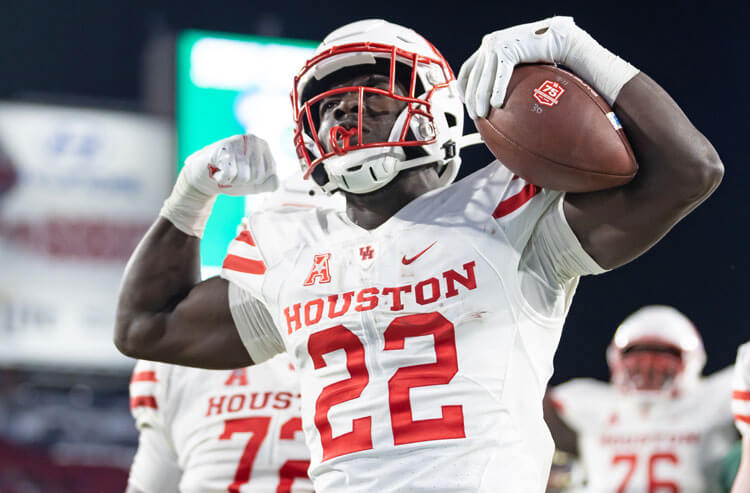 Memphis vs Houston Picks and Predictions: Statement in Space City
Provided by