San Diego State vs UNLV Picks and Predictions: Rebels Have Value As A Spot Bet

The 9-1 Aztecs seem like a shoo-in against 2-8 UNLV, but the Rebels have won two in a row and this is a massive sandwich spot for SDSU. Is that enough to have our college football betting picks lean towards backing the double-digit underdogs?

The UNLV Rebels (2-8) now have two straight wins — the first two wins of coach Marcus Arroyo’s tenure — after starting 0-8. The Rebels are looking to get out of the Mountain West’s cellar, where they have resided for several years, but are double-digit college football betting home underdogs against SDSU.

Fresh off a crucial win over Nevada, and with a momentous clash against Boise State looming on Black Friday, is this a potential sandwich spot for the Aztecs?

Check out our free college football picks and predictions for San Diego State vs. UNLV on Friday, November 19, to find out.

San Diego State opened -11.5 but the line is currently -10.5 at most books. The total has taken some money, going from 40.5 at open to 41. Use the live odds widget above to track any future line movements right up until kickoff and be sure to check out the full college football odds before placing your bets.

The Under is 5-0 in the last five meetings between these two schools. Find more NCAA betting trends for San Diego State vs. UNLV.

The improvement is starting to show for UNLV in Year 2 under Marcus Arroyo. After dropping eight straight games to begin the campaign, the Rebels have rattled off back-to-back victories, with both wins coming by two scores against conference opponents.

The defensive front is partly to thank, having racked up 38 tackles for loss in its last five games. The rushing attack is the bread and butter offensively, with program legend Charles Williams taking a record 38 carries for 266 rushing yards in last week’s victory over Hawaii. The Rebels also may have found their quarterback of the future in freshman Cameron Friel, who has completed 63.4 percent of his passes but needs to cut down on turnovers (6 TDs against 10 INTs).

While San Diego State’s record and 19th CFP ranking may look pretty, the results on the field haven’t always been comfortable. Four of the Aztec's last five conference wins have all come by single digits, as this is not a team that runs up the scoreboard (27.7 points per game), so covering a double-digit point spread isn’t necessarily a part of this team’s DNA.

This is also a sandwich spot for San Diego State, who secured a massive last-second win over Nevada last week on Matt Araiza’s game-winning field goal and has a clash with Boise State on deck next Friday. Head coach Brady Hoke even admitted that there’s concern on looking ahead of UNLV in this spot, saying, “There’s no doubt,” when asked.

UNLV, meanwhile, is fired up after two victories and will be playing loose in front of its home crowd on a Friday night in Vegas.

San Diego State may be a good team, but it certainly doesn’t have a good offense. The Aztecs rank just 112th in total yards per game and are averaging only 5.1 yards per play on the season. The rushing attack is supposed to be the strength of this unit but it's faltered as the season has gone along: After recording over 200 rushing yards in the first five games of the season, the Aztecs have been held under that mark in each of the last five games.

UNLV has improved its rushing defense throughout the season to the point that it has held five of its last seven opponents under 4.0 yards per carry. Last week, it held Hawaii to only 57 yards on 28 carries and Nevada mustered only 22 yards on 18 carries three games ago

This Aztecs defense, meanwhile, is no joke. This is a Top-10 unit from a scoring defense perspective (17.1 ppg), led by a dominant rushing defense allowing only 83.1 yards per game and 2.8 yards per carry. That strength will help limit UNLV, which is a run-first team (34.4 rush attempts per game compared to 27.9 pass attempts). Defensive end Cameron Thomas leads the way with 16.5 tackles for loss and 8.5 sacks.

Both teams will look to run the ball, but that plays into the strength of the other team’s defense. That should also keep the clock ticking.

The Aztecs and their opponents have only combined to go over 41 points just twice in conference play, and both were against prolific passing attacks (Fresno State, Nevada). They’ve cruised Under this mark in every other conference game.

It’s the brand of football that both teams want to play — run the ball offensively while limiting the opponent’s ground game. This plays well to Unders, evidenced by the Aztecs being 6-1-1 to the Under in their last eight games as a road favorite.

We’re riding with the Under as our best bet. 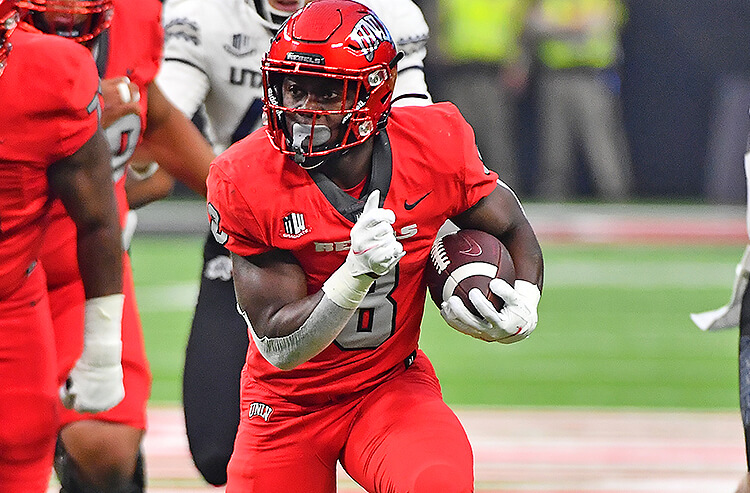 San Diego State vs UNLV Picks and Predictions: Rebels Have Value As A Spot Bet
Provided by