The Wildcats have had another rough season, but its second half has shown some potential. With the books still underrating them, we can find some value as they take on the Cougars in Week 12. Find out more with our Arizona vs Washington State picks.

This week, the Washington State Cougars host an Arizona Wildcats team that has won only one game this season. The fans in Pullman will surely be expecting a victory in this one, but it’s never easy to beat any opponent in Pac-12 play. Washington State would, however, secure a bowl bid with a win here.

Will the Cougars win and cover as 14.5-point favorites against the Wildcats? Continue reading our Arizona vs. Washington State picks and predictions.

You can get Arizona at as high as +15.5 in this game, but the most common lines have the Wildcats getting 14.5 or 15 in this one. The line opened with Arizona as a 15-point underdog, so it’s just moving all over the place at this point. The total, meanwhile, has stayed at the opening line of 52.5 for the most part, but it is randomly sitting at 54 on one book.

This hasn’t been an easy season to be a part of the Arizona program, but things have looked a bit better as of late. The Wildcats earned their first win of the year two games ago, beating the California Golden Bears, 10-3. Arizona has also covered in each of its last four games, showing that this team has been a lot more competitive in the second half of the season. It’s telling that, despite being underdogs by a total of 62.5 points against the Washington Huskies, USC Trojans and Utah Utes, the Wildcats lost those three games by a combined 21 points. Jedd Fisch is doing something right in Tucson, and this really shouldn’t be an easy win for Washington State.

One of the reasons the Wildcats are starting to play a bit better is that Will Plummer has given Arizona some decent quarterback play. Jordan McCloud looked like the future at the position before suffering a nasty injury, and there was some concern over whether anybody would step up and play well for the Wildcats. Well, Plummer hasn’t been perfect, but he’s been making a ton of plays with his legs recently. Over the last two weeks, the freshman has rushed for 118 yards, and he’s also scored on the ground in two of the last three games.

That unpredictability is making it tough for opposing defenses, and that also makes it tough for them to pay attention to Stanley Berryhill III. The junior is an absolute weapon in this Wildcats offense and could be in for a big game against the Cougars. Berryhill is a wide receiver, so he is mostly making plays as a pass-catcher. However, the Wildcats will get him some manufactured touches as a runner.

Defensively, Arizona will have some trouble on a weekly basis. The Wildcats just don’t have the talent to consistently play well on that side of the ball. They are, however, playing a Cougars offense that no longer has the firepower it did when Mike Leach was around. Jayden de Laura does a decent job of running the show in this passing game, but he rarely ever shreds opponents with his arm. That gives the Wildcats the option of playing the run pretty aggressively.

The Over has hit in each of the last five meetings between Arizona and Washington State. The average number of points scored in those five games was 90.2. This one shouldn’t be quite as high-scoring as those, but these are two teams that should easily tally in the high 20’s against one another, which would safely cash this Over

The Over also happens to be 6-0 in Weeks 10 through 13 for Washington State since the start of 2019. And just looking more recently, the Over has hit in two of Arizona’s last three games, and it’s also 2-1-1 in Washington State’s last four.

Considering the way the Wildcats have come alive offensively, they should be able to move the ball successfully in this one. And the Cougars will surely beat this porous Arizona defense as well.

Washington State has played two home games in which the team was favored to cover by at least two touchdowns, but the Cougars didn’t cover in either of those games. One of them actually ended in an outright loss to the Utah State Aggies. That’s not to say that Washington State is in big danger of losing this one or anything, but the team hasn’t performed well as a big underdog, and it’s fair to question why the Cougars are giving so many points against a team that has covered four games in a row.

Also, for as bad as things have been for Arizona this season, a 5-2 ATS record in conference play is actually quite impressive. Meanwhile, Washington State is 2-9 against the spread when coming off a game in which at least 60 points were scored over the last three seasons.

Did you know that if you parlayed our Arizona vs. Washington State picks, you could win $26.45 on a $10 bet? 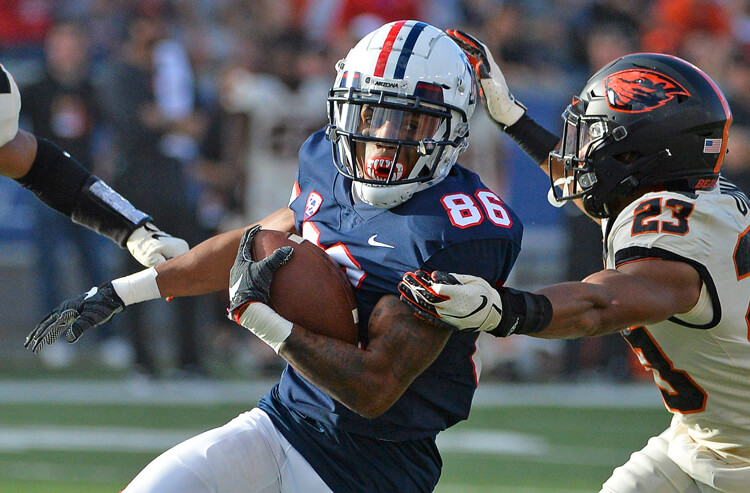