Louisville vs Duke Picks and Predictions: Cardinals' Season Begins to Take Off

The Louisville Cardinals have shown flashes this season, while the Duke Blue Devils have faltered massively in conference play. Our college football betting picks highlight why Duke will struggle to keep it close at home.

It is never fun to foreshadow the end of someone’s career, but in his 14th year at Duke, it seems clear the end is near for Blue Devils head coach David Cutcliffe. A 50-year career should find a more noble conclusion than an eight-game losing streak to put up an 0-8 conference record, but that is exactly what Cutcliffe is looking at if Duke does not find an upset in the next two weeks.

If Cutcliffe is going to mount a last stand, it probably has to begin now.

Here are our free college football picks and predictions for Louisville at Duke on November 18, with kickoff set for 7:30 ET.

Sunday’s earliest lines set Louisville as a 19-point favorite before quickly jumping to -19.5. On Wednesday, that moved through a key number to -20.5, where it remains at most books with some still hung at -20. The total began the week at 58.5 before touching 61.0 on Tuesday morning and settling at 60.5 that afternoon.

Duke is 0-4 ATS in its last four games and 1-5 in its last six, failing to cover by an average of 15.4 points in that stretch, dating back through all of the Blue Devils’ conference games this season. Find more NCAA betting trends for Louisville vs. Duke.

Louisville vs Duke picks and predictions

Duke’s and Cutcliffe’s struggles were camouflaged to begin the year by the relative wreck of a non-conference schedule they played. Even after opening the year with a loss at Charlotte, the Blue Devils gave the appearance of competence by winning their next three to reach 3-1 before ACC play began. In retrospect, those three wins were against FCS-level North Carolina A&T, Northwestern, and Kansas. Those latter two teams rank No. 94 and No. 128 in yards allowed per play, respectively. The Jayhawks rank No. 130 in the country in scoring defense. Duke hanging 52 points on them makes some sense, as does it averaging 544.8 yards per game in that non-conference slate, along with 6.75 yards per play and 38.8 points per game.

Then reality struck. The Blue Devils have averaged 360.8 yards per game, 4.69 yards per play, and 14.5 points per game in ACC play. That sample size of six games is large enough to consider those numbers the true reflection of Duke in Cutcliffe’s 14th season.

Louisville has shown flashes this season — 41 points last week against Syracuse a possible rebound to the form the Cardinals showed to start ACC play when they averaged 31.5 points per game in their first four conference games — justifying thinking it will have little trouble cracking 30 points in Durham. Every single Blue Devils opponent has scored at least 31 points dating back to Kansas, including all their ACC opponents.

Giving up 42.4 points per game across a seven-game stretch is plenty of an illustration of how porous Duke’s defense is. Louisville will enjoy that, while it will not need to do much to slow down the Blue Devils.

If Duke is giving up 40-spots on the regular, including to its last four foes, then any total below 62.0 should be considered ripe picking. The Cardinals are likely to end up closer to 50 points than to 40, and at that point, if the Blue Devils can simply find the end zone twice, they will send this game Over.

That may be a quick handicap, but this will not be a game marked by its defenses.

The Louisville team total Over of 40.5 is tempting, but that may take the entire night to cash. The idea of the Cardinals simply covering the 20-point spread is logical, but a backdoor worry might linger into the 11th hour.

Why wait to win money?

First half spreads are not as prone to backdoor covers as full game spreads, though they also have the 50/50 concern of the coin flip giving an extra possession to the wrong side. When facing an offense as inept as Duke’s, though, that extra possession should amount to neither points scored nor time burned.

Let’s head to the proverbial, or literal, betting window with a winning ticket before the West Coast even finishes happy hour. 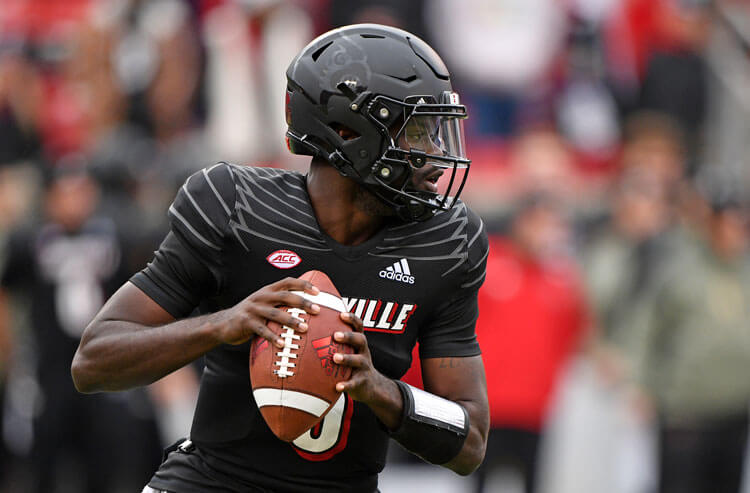 Louisville vs Duke Picks and Predictions: Cardinals' Season Begins to Take Off
Provided by