With quarterback Trevor Lawrence out of the lineup and in COVID protocol, running back Travis Etienne will be key for No. 1 Clemson this week at No. 4 Notre Dame. FanDuel has the Tigers 5.5-point favorites.

College football odds for Week 10 are on the betting board and getting action, with a couple of gems on this week's schedule. No. 1 Clemson, minus star quarterback Trevor Lawrence, travels to No. 4 Notre Dame, while No. 8 Florida and No. 5 Georgia square off in their annual neutral-site showdown.

These are the current College football Week 10 odds for the premier games on the schedule, as of November 2. Click on each matchup in the table below to get updated in-depth information on the opening lines, sharp money, public betting and odds movement as we get closer to kickoff.

UPDATE 11:45 A.M. ET FRIDAY: Ten hours before kickoff, the road favorite is a very popular play at DraftKings. Brigham Young opened -2.5 and got to -4.5 this morning, with tickets and money both running more than 4/1 on the Cougars. The total is up to 63.5 from an opener of 59.5, with 86 percent of tickets and money on the Over.

This game opened pick 'em at FanDuel and moved to Brigham Young -2.5 Monday afternoon, with practically every early ticket and all the early dollars on the Cougars. The total dipped two points to 57.5, then returned to the opener of 59.5, with ticket count 9/1 on the Over and 72 percent of early cash on the Over, as well.

UPDATE 6 P.M. ET THURSDAY: Due to an upward trend in COVID-19 cases on the Air Force Academy campus, this classic rivalry game was postponed. There is no reschedule date yet, though the schools said they are working to reschedule if possible.

The Black Knights were already down two points at FanDuel, sitting as 4.5-point favorites Monday night on some interesting point-spread betting splits: ticket count is more than 2/1 Army, but money is almost dead even. The total is also down a point to 40.5, with 77 percent of bets and nearly all the money on the Under.

UPDATE 8 P.M. ET WEDNESDAY: The Bearcats opened -12.5 and have been at -13.5 since Monday at DraftKings. The early action is all Cincinnati, in the 9/1 range for both ticket count and money. The total fell from 58.5 to 55 by this evening on polar-opposite splits, with 87 percent of bets on the Over and 84 percent of money on the Under.

Cincinnati opened -10.5 at FanDuel and sped to -13.5 by Monday afternoon, but the betting splits are a bit wild. The Bearcats are attracting 95 percent of early tickets, but money is two-way, with 52 percent of early dollars on double-digit-dog Houston. The total is down to 56.5 from 58.5, with a 4/1 ticket count on the Under and almost all the early money on the Under.

UPDATE 10 A.M. ET SATURDAY: At BetMGM Nevada, Michigan is the most-bet team by ticket count of any team on the Saturday schedule, "by a decent margin," BetMGM Nevada's Scott Shelton said. The Wolverines are at -3.5 from an opener of -3, with tickets and money both in the 3/1 range on Michigan.

Michigan, coming off a stunning home loss to Michigan State, opened -3.5 at FanDuel and moved to -2.5. As of Monday night, 53 percent of bets and 68 percent of money were on the Wolverines. The total tumbled from 55.5 to 51.5, with 62 percent of tickets on the Over, but 74 percent of cash on the Under.

UPDATE 2 P.M. ET SATURDAY: At FanDuel, Ohio State dipped a bit to 37.5 and the total is down to 62.5. But the book didn't have betting splits available for tonight's game.

UPDATE 9 P.M. ET FRIDAY: Ohio State is up to -39 at DraftKings, despite there being very few Buckeyes buyers. Ninety-four percent of tickets and 89 percent of dollars are taking the huge number with Rutgers. The total is at 65, with tickets 2/1 and money 6/1 on the Over.

UPDATE 8 P.M. ET WEDNESDAY: Ohio State is a massive 37.5-point chalk at DraftKings, where tickets are running more than 2/1 and money about 3/1 on the Buckeyes.

Ohio State opened a massive favorite at The SuperBook at Westgate, and there was no line movement on Monday. The Buckeyes are coming off a 38-25 victory at Penn State, while Rutgers fell to visiting Indiana 37-21.

UPDATE 9:30 P.M. ET FRIDAY: This line bounced between Trojans -10.5, -11 and -11.5 throughout the week at DraftKings and is currently at -11. Arizona State is the more popular play, though, attracting 60 percent of bets and 66 percent of money.

And hello to the Pac-12, which finally joins the college football scene on the first weekend of November. By Monday night, USC was already up to -11.5 at FanDuel in a game drawing two-way action, with 54 percent of bets on Arizona State and 55 percent of money on Southern Cal. The total ticked from 59.5 to 58.5, though 69 percent of bets and 60 percent of dollars were on the Over as of Monday night.

UPDATE 7:05 P.M. ET SATURDAY: This was another game that bounced around a lot this week. At William Hill US, the Ducks opened -10.5, dropped as low as -7.5, then popped up  to -12 with kickoff approaching. WillHill director of trading Nick Bogdanovich said some sharp play was involved in that move, and the public surely on Oregon. The book needs Stanford small.

UPDATE 9:30 P.M. ET FRIDAY: The Ducks dropped from -11 to -8 by Thursday at DraftKings, then ticked up to -9 this afternoon. Betting splits are pretty interesting on this Pac-12 After Dark clash, with 81 percent of tickets on Oregon, but 53 percent of money on underdog Stanford. The total made a modest move from 51 to 50.5, despite tickets and money in the 9/1 range on the Over.

Staying in the Pac-12, FanDuel sped to Ducks -12 Sunday afternoon, but a volatile line was down to -10.5 by late Monday morning. Still, ticket count and money were both running 4/1 on Oregon. The total dipped from 53.5 to 52.5 Monday, with tickets split 50/50 but almost all the early money on the Under.

UPDATE 9:30 P.M. ET FRIDAY: After a speedy move from Cowboys -10.5 to -13.5 early in the week at DraftKings, this line has been fairly stable at Cowboys -12.5. Fifty-nine percent of spread bets are actually on the underdog Wildcats, but 62 percent of spread dollars are on Oklahoma State.

The Cowboys bolted to -13.5 at FanDuel by early Monday afternoon, then receded a bit to -12.5. It's two-way action early, with 59 percent of tickets on Kansas State and 53 percent of money on Oklahoma State. The total first went up to 51.5, then plummeted to 46.5, with tickets more than 2/1 on the Over, but money 2/1 on the Under.

UPDATE 3:15 P.M. ET SATURDAY: Shortly before kickoff in Jacksonville, Fla., Georgia is a 3-point favorite at BetMGM Nevada, with the  public on the Bulldogs and sharp play on Florida bringing this line down. "Money is about the same, ticket count about 55/45 on Georgia," BetMGM Nevada's Jeff Stoneback said. "Good two-way on the game."

UPDATE 2:30 P.M. ET FRIDAY: Georgia is at -3 from an opener of -4.5, in what PointsBet USA's Patrick Eichner termed a Pros vs Joes game. "We saw sharp money come for the Gators at +4.5, and Florida was still being bet at +3.5," Eichner said. "Pros all over Florida in this one, Joes all over Georgia."

UPDATE 8 P.M. ET WEDNESDAY: The Bulldogs moved from -2.5 to -4.5 early at DraftKings, then receded to -3, with ticket count almost dead even, but money flowing 3/1 on the Gators. The total moved from 52.5 to 53.5 and back, with almost-perfect two-way ticket count, but 85 percent of early dollars on the Under.

It's a neutral-site game in Jacksonville, Fla., for the World's Largest Outdoor Cocktail Party, the unofficial name of this rivalry. FanDuel opened the Bulldogs -4.5, and that number stuck through Monday night, while the total moved from 52.5 to 53.5, but betting splits were not yet available.

UPDATE 7:05 P.M. ET SATURDAY: About a half-hour before kickoff, Clemson is -5.5 at William Hill US, where director of trading Nick Bogdanovich said the book is dead even to practically every element of full-game betting. However, in the last hour, the book took a $200,000 wager on Clemson -3 first half, so the book needs Notre Dame to dispatch that ticket.

UPDATE 2:30 P.M. ET FRIDAY: This game is generating strong handle at multiple sportsbooks, including PointsBet USA. "It's shaping up to be one of the best games of the year in terms of overall handle," PointsBet's Patrick Eichner said. "It is already almost double our No. 2 game this week, Florida-Georgia. It also will definitely beat our No. 1 college game overall to date, which was Michigan-Minnesota." Clemson opened -6.5, peaked at 7 and dipped to -5 before setting at -5.5. "Good two-way on the side, 60 percent of the tickets on Clemson, but 60 percent of the money on Notre Dame." Eichner said Notre Dame moneyline (+175) is also a popular play, taking 80 percent of money in that market. The total moved from 51 to 52 to 50, with 80 percent of bets on the Over, but just 55 percent of money on the Over.

UPDATE 8 P.M. ET WEDNESDAY: The SuperBook at Westgate pegged Clemson a 5.5-point favorite, a big adjustment from where this line would stand if the Tigers had Trevor Lawrence under center this week. "Clemson would be -11 or -11.5 if Lawrence was playing, about the same adjustment as last week," SuperBook manager/oddsmaker Eric Osterman said, alluding to the spread adjustment in Clemson's home win over Boston College. "The action has been pretty light so far. I'm sure people are evaluating (DJ Uiagalelei's) play last week before making a wager. I would expect to see Notre Dame money from the public, because of Clemson's near loss to BC last week."

FanDuel posted a look-ahead line for this game back on Oct. 24, with Clemson a 14.5-point road chalk. However, last week's news that Tigers stud QB Trevor Lawrence tested positive for COVID-19 led to that line coming off the board. On the subsequent news that Lawrence won't play this week, the line went up at Clemson -6.5 Sunday and fell to -5.5 Monday. The Tigers were landing 60 percent of bets/64 percent of money on the spread through Monday night. The total opened 51.5 and went to 52.5 before returning to the opener Monday, with 76 percent of bets on the Over, but 53 percent of early money on the Under. 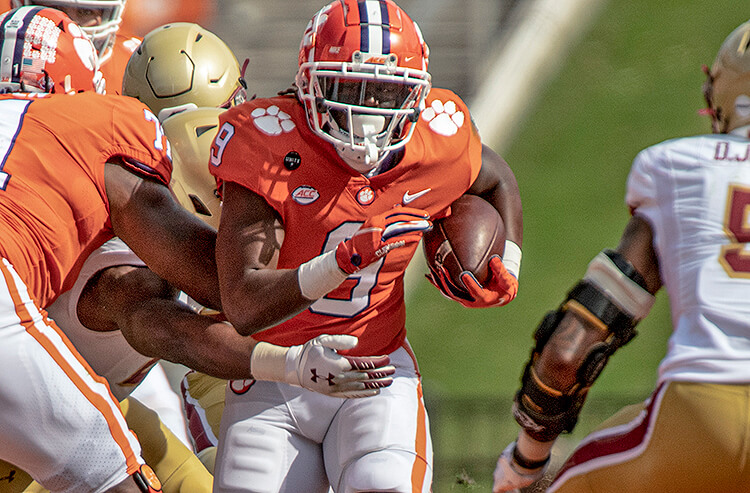