Arizona State vs USC picks and predictions for November 7

Jayden Daniels threw for 2,943 yards as a freshman last season, finding the endzone 17 times while giving up just two interceptions.

Did anyone realize that the Pac-12 was starting this weekend? Those of us interested in college football betting certainly did, though I admit that the conference had slipped my mind for a while—but no longer! And we’ve got a good one this weekend at the LA Coliseum with USC hosting Arizona State. Will the Trojans finally meet preseason expectations? Will Herm Edwards say something hilarious that we repeat for a year? Maybe both.

Let’s check out our best college football free picks and predictions for Arizona State at No. 20 USC, with kickoff set for 12:00 ET in Los Angeles.

It’s going to be beautiful out in Cali this weekend. We’re looking at a high of 66 degrees with a west wind at 8 mph. However, there is a 25% chance of showers.  Be sure to monitor the gametime conditions with our NCAA football weather info.

The Sun Devils are hoping to replicate their success at the beginning of last season, while avoiding how they finished. Arizona State got off to a blistering 4-1 start before losing four straight and finishing with an 8-5 record. Thankfully, Jayden Daniels is still running the show at quarterback, returning after tossing 17 touchdowns and only two interceptions last season. The Sun Devils also bring back an experienced secondary while adding new defensive coordinators Marvin Lewis and Antonio Pierce to help run the show.

Once again, the Trojans are the favorites to win the Pac-12 South, and that’s due in large part to the return of quarterback Kedon Slovis. He was fantastic last year, rolling up 30 touchdowns against nine interceptions, and he’ll have four starters returning on the offensive line to boot. USC also made a change at defensive coordinator, hiring Todd Orlando after he was fired from the same job at Texas.

There’s no question that the Trojans have more talent than the Sun Devils. That’s always the case, isn’t it? However, a double-digit spread this early in the season feels far too high when a senior-laden secondary for Arizona State should be able to produce enough stops to keep this game within the number.

With two game-changing quarterbacks taking the field and some nice weather, I’m expecting plenty of points in this one. In addition, the Over is 6-0 in the last six games for the Trojans with Graham Harrell as offensive coordinator.

It’s hard for me to get past the Trojans bringing in a defensive coordinator responsible for some of the worst defenses in Texas history.

Maybe I’m scarred from watching Orlando consistently sending his corners on impossible blitzes, but until I see a change in his scheme, I’m betting Daniels gets to make more than a few plays. 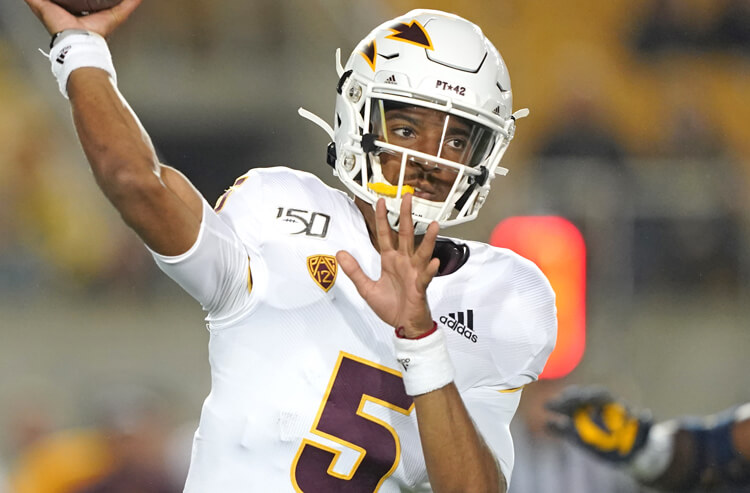